For the first time, the Oculus Rift is the leading VR headset on Steam

Valve’s monthly hardware survey clocks the Rift as the most used VR headset on the platform, usurping the HTC Vive from that number one slot.
Kris Graft
Publisher
March 02, 2018

Valve’s monthly hardware survey reports that the Oculus Rift has risen in popularity on Steam, to the point that it has knocked the Vive from its usual position as the most used VR headset on the platform.

While the Rift’s new number one ranking is notable and bodes well for the headset’s presence on the typically Vive-led platform, game developers should keep in mind that participation in the hardware and software survey is entirely optional for Steam users, so the data shown doesn’t represent VR use of Steam’s entire user-base as a whole.

All in all, the Rift now boasts roughly 2 percent lead over the Vive. February’s numbers show the Oculus Rift accounting for 47.31 of the VR headsets on the platform, while the Vive is now only used by 45.38 percent of reporting VR users.

Both PC-bound headsets have received a fair number of price cuts during the last year or so that could be responsible for the slow rise in VR usage, and Oculus has notably been more aggressive than HTC when slicing prices.

The last cut from Oculus knocked $100 off of the price tag, bringing the Rift headset and controller bundle down to $399. One month earlier, the price of the Vive dropped from $799 to $599, though, even with the $200 cut, HTC’s headset is still a fair bit more expensive than the Rift. 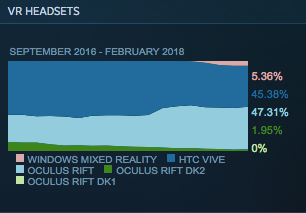 Overall, roughly .28 percent of reporting Steam users have VR headset plugged into their PC. Looking at Steam’s entire reporting userbase as a whole, the Rift is now used by .14 percent of users, up .02 percent from January, while the HTC Vive is used by .13 percent, up .01 percent from last month.

While the percentages show an increase, Valve notably doesn’t release the number of users that use each headset or the number of people that opt into the hardware survey overall, so the numbers should be taken with a grain of salt.