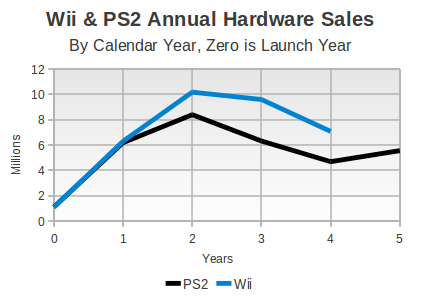 Yet, as you can see above, the PS2 rebounded to 5.5 million systems in its fifth year. Whether we can expect the same of the Wii in 2011 is unclear. If one takes the position that software drives hardware (and it does, in some instances) then 2011 does not appear to be the same kind of year that 2005 was for the PS2. Remember that many classic PS2 titles were released in 2005, including Devil May Cry 3, God of War, Gran Turismo 4, Resident Evil 4, and many others. Just in terms of raw sales, the PS2 dominated sports games that same year with Madden NFL 06 moving nearly 3 million units, NCAA Football 06 over a million, MVP Baseball 2005 just under a million, and NBA Live 06 just over 800,000. The all-format top 10 chart for 2005 also included the PS2 versions of Star Wars: Battlefront II (over a million units) and Star Wars Episode III: Revenge of the Sith (just over 900,000 units). This is a key distinction between the PS2 and the Wii. The PS2 saw its annual software sales curve peak two years after its peak hardware sales, appearing to show that consumers continued to purchase software long after they obtained a system. By comparison, Wii software has roughly tracked with its hardware sales, and that suggests that new system owners are the primary engine of Wii software sales. The figure below shows annual software sales for the PS2 and Wii on the same time scale as the hardware graph just above. Note how Wii hardware and software peaked together in 2008 and 2009 (years 2 and 3 on the graph) and then fell together the following year. However, PS2 software grew in 2003 and 2004 (again, years 2 and 3 on the graph) while the system's hardware sales fell. 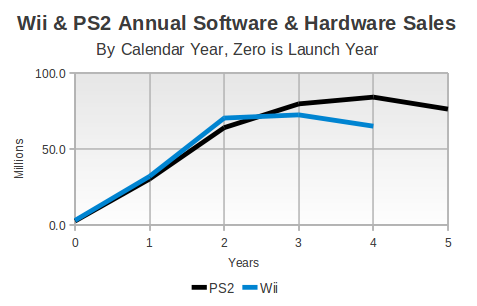 Even with Nintendo's strong backbone of evergreen titles (New Super Mario Bros. Wii, Mario Kart, Wii Fit, and others), it seems unlikely to us that the Wii will avoid another down year in hardware based on its software slate alone. Should Nintendo and third parties choose to announce new titles in the coming months, then of course this position could shift. Remember that Donkey Kong Country Returns wasn't announced until June 2010 and has sold over 1.8 million units since its November launch. A price cut would certainly help the Wii. When the PS2 rebounded in 2005, it had already been cut to $150 in early 2004. The Wii has reached that effective price with retailer bundling (e.g. a Wii and $50 gift card for $200), but since the system officially dropped to $200 in September 2009, it hasn't seen a true cut in price. In fact, Michael Pachter, analyst for Wedbush Securities, commented in a recent correspondence that “Nintendo should cut hardware prices first” while it will likely be Sony who ultimately makes the first move. He believes that Nintendo is ceding marketshare to its competitors (probably mostly to the Xbox 360 and Kinect, if we had to speculate) and could reverse that trend with a lower-priced Wii. Which leads us to conclude that it seems likely that the Xbox 360 will outsell the Wii in 2011. That would be an astonishing reversal of fortune, especially given the rapidity of the Wii's rise through 2009. Should the Wii rebound, even slightly, during 2011 then we expect it to retain its annual dominance over Microsoft's console. For the rest of Matthews' monthly NPD analysis, read the full Gamasutra feature, available now.
Console
Get daily news, dev blogs, and stories from Game Developer straight to your inbox
Subscribe