Road to the IGF: Mega Crit Games' Slay the Spire

Slay the Spire tasks players with creating decks of cards that combine into crushing combos that will smash anything in their path.
Alissa McAloon
Editor-in-Chief
January 22, 2020

Slay the Spire tasks players with creating decks of cards that combine into crushing combos that will smash anything in their path.

It gives them plenty of options to do so with its extensive card system, but should they fail against its myriad monster challengers, or choose poorly in which path you take up the spire, they'll find themselves back at the start. Still, that's just a reason to tweak your deck and try again.

Gamasutra sat down with Anthony Giovannetti of Mega Crit Games, developers of Slay the Spire, to learn about the challenges of creating the game's cards, how the developers sought to reward players for clever combinations, and adding layers of strategy for players to use in their playthroughs.

My name is Anthony Giovannetti, and I led the design effort and did programming on Slay the Spire.

My co-founder (Casey Yano) and I made some hobbyist level games in college before getting our computer science degrees. After working in the software industry for a while, we reconnected and started to work on Slay the Spire. 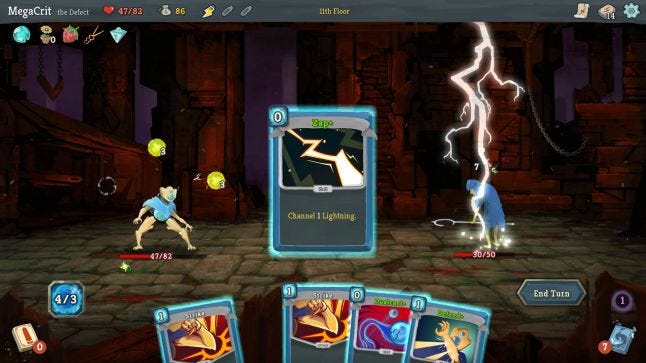 I have been a lifelong card game player that also loved playing roguelikes. It seemed to me that deckbuilding and roguelikes was a particularly strong mechanical pairing, and I created a design document for Slay the Spire while working in the software industry.

The tools to create an adventure

Slay the Spire is made in LibGDX. 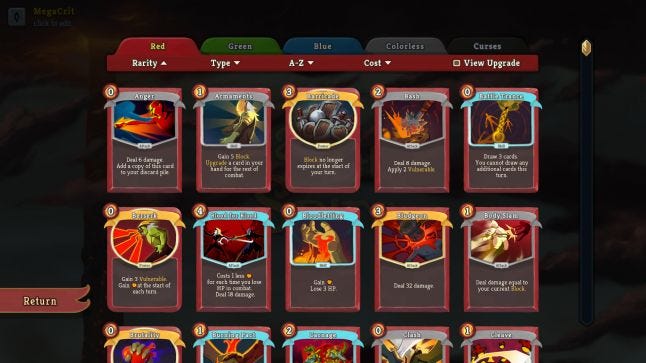 On creating "the best single player deckbuilder we could"

This genre basically wasn't around when we launched Slay the Spire. It speaks more to giving it our all and trying to deliver a game to our own high standards.

Creating the cards of Slay the Spire

We spent a long time designing the cards in Slay the Spire, and went through years of playtesting to get everything just right. Our process was to brainstorm thousands of different card designs and cut out the chaff down to the designs that we felt had the most impact. From there, it is all about rigorous and extensive playtesting and iteration.

Allowing for combos and strong synergies is definitely a hallmark of our design process. In general, we believe in rewarding player mastery, and as a card game player myself, I know the sheer joy when your deck comes together and feels like a well-oiled Rube Goldberg machine. Since we are a single player card game, we don't have to worry about the typical downside of strong combos - where the opponent feels bad because of an overpowered strategy. 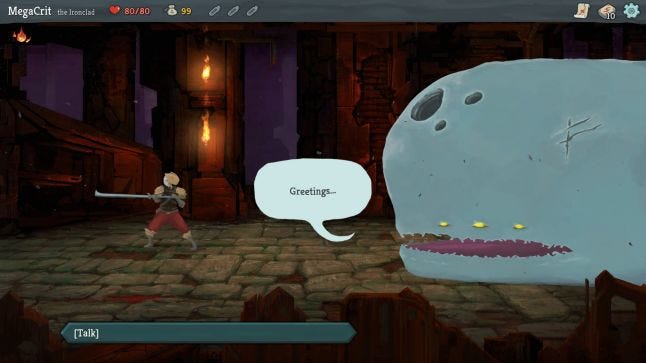 The paths that the player can take were inspired by FTL. I think it is valuable to have layered decision-making in a strategy game, and navigating the map adds an extra element of risk/reward and planning to the game. Choosing a path based on the meta strategy elements adds a lot of richness and depth to the strategy without a ton of complexity.

Creating enemies that challenged in a variety of ways

We wanted a wide gamut of enemies that would challenge different strategies in unique ways. It was important to us that there would not just be a single dominant strategy that the player could always do, but that when building a deck, the player would want to keep multiple things in mind.

We weren't particularly worried about this. There are so many different permutations of decks that you can build in Slay the Spire that our replayability, even early in playtesting, was off the charts. The important thing is to quickly allow the player to start carving out new strategies or experimenting with new things - this was key.