The institution of mentorship

A classical or stereotypical definition of mentorship would require me to say that a mentor should be my senior or have more experience in the subject matter I’m seeking knowledge for. I would like to offer a modern definition of this age-old institutio
Kumsal Obuz
Blogger
May 28, 2021

My most recent experience with mentorship goes back to the early days of this year, in January 2021, after I found myself exhausted and scattered all over the place with my thoughts, plans, endless to-do lists, and most likely a burn-out.

After the release of our first game in late September and dealing with its post-release operations, November witnessed the beginning of a YouTube series called “Made With Godot”. December was pretty much dedicated to online conferences and networking. So, I had been working pretty much non-stop since launching my company in August 2020 when I realized I had very little juice left in me in the middle of January.

Besides feeling tired, there was something else nagging at me though. See, when you work for the man, your main job is essentially going through the day with your tasks. Sure, you can define the terms of those tasks so they align better with the company’s goals but, as an employee, you’d seldom find yourself in a position to set a company’s goals. As a business owner, I was now in a different spot, I had to set those goals and define the tasks.

Two things had to change or start. One is a system or a set of tools with which you define and track your company’s goals: OKR. I’ll just leave it as a link to Wikipedia for now since it is a separate story to tell; one which is too lengthy to squeeze in here.

The second one, which is what this story is about, is mentorship. I approached my friend Gokhan Ercan with whom I used to work when I had lived in Turkey until I left the country in 2008. I’ve been living in Toronto since then. Despite the time zone and physical distance, we have kept in touch.

I suggested to him we have weekly meetings, for an hour or so, divided evenly if possible so we can each take a turn to go over topics we would like to discuss. Usually, one party goes over a few slides to share their progress since the last meeting and we discuss a few short-term plans. Then, the other party takes their turn. When the core topics are finished and if we have time to goof off, we do that too.

We’ve been mentoring each other since the beginning of February every Tuesday, rain or shine, at the designated hour. We both tend to stick to this schedule unless there is an emergency. If there is, then we still have our session the day before or after but we try not to shift things too drastically. The goal is to make the effort to be present and attentive. 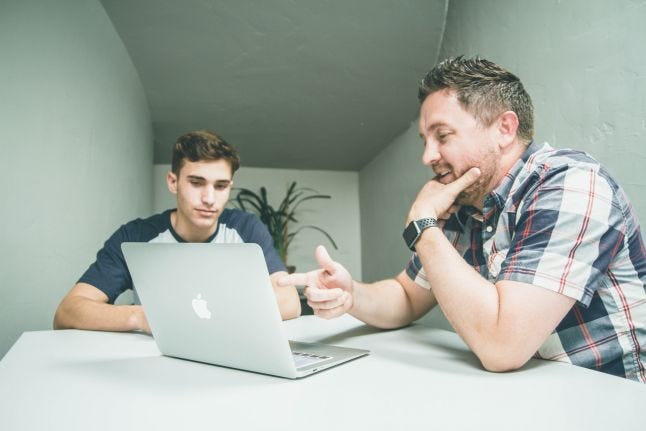 Besides the immediate benefit of sharing what’s been on your mind, there is another long-term benefit to this whole exercise. You see it happening after the first few sessions. In between sessions, you try to be economical with what you’re going to write in your presentations and what to discuss afterward. It creates a mental discipline to do course correction during the week so you can bring up the most important stuff to your mentor hours. If what you’ll be doing is not important and it won’t matter that much to present to your mentor, then why do it all in the first place? Being accountable is good and not always easy but it becomes easier when you feel you are accountable to someone else.

Another potential benefit is that you get to know another subject matter. When I first met Gokhan, some 15 years ago, he was a promising web developer. I was mostly involved in the project management and design of website projects at the company we both worked for. He would take care of the back end and I would do the front end of e-commerce websites. We quickly developed a good sense of camaraderie but I feel, deep down, what we both also liked about each other was our sense of curiosity and constantly learning new things.

Gokhan has since learned so many other skills and he’s writing his Ph.D. thesis these days. In fact, his thesis topic is what he talks about in our sessions. It’s a completely different field than I remember him practicing so long ago. He’s now into natural language processing, AI, machine learning, etc… You can check out some of the stuff he’s been working on here.

Through his presentations, I get to learn how Facebook handles text processing, sentiment analysis, and how machine learning fits into this picture. He talks about comparative models between different languages, mainly English and Turkish. I don’t want to spoil the party but his thesis will show the world how to improve on Facebook’s FastText algorithm.

In return, Gokhan listens to the details of how I want to run my business, what kind of marketing moves I should be making in the short term, and lastly what kind of challenges I’m facing since I’m the sole owner and employee of Viroid Games.

Hence, our common ground of web development now evolved into two distinct and perhaps remote fields. That being said, we both still maintain the joy and practice of understanding how a system works whether it’s how a language functions or how to run a video game company.

You may be asking, what is the difference between what we have been doing versus talking to a friend. It’s the structure. We don’t take each other for granted. We come to our sessions prepared, we maintain mental discipline, we value each other’s time so we don’t waste each other’s time, mostly our own time.

A friend is good, irreplaceable for sure, in those moments when you need to offload that burden on your chest. Those heart-to-heart talks are necessary and so spontaneous that it doesn’t need a structure. It happens naturally, usually over a beer or a cigarette; you get my point.

What I’ve been presenting so far as mentorship is perhaps what most people describe as going to a therapist. I know because I’ve been in therapy on and off, and it’s a similar feeling you get when your next session date is approaching. It gives your life and days some sense of structure. You feel composed and you try to separate the wheat from the chaff.

At Indie Game Business Conference in March this year, I was searching company and attendee profiles for networking and I saw the following quote on Diego Ricchiuti’s profile:


Talking to someone costs nothing, losing an opportunity can be fatal.

This sentence is the essence of what I’ve been experiencing via mentorship. I thought I had a million voices in my head back in January. I now have a few thousand. That’s a big improvement I’d say. I wish those who need this sort of counseling would find their mentor as soon as possible.

Last but not least, I thank my friend again for providing mentorship to me and I hope I’m returning the favor.