Should You Localize Your Game's Title?

You’re planning on localizing your indie game when it suddenly hits you—should you localize the title of your game? Well, the answer is, it depends! There’s no clear-cut answer.
Damien Yoccoz
Blogger
June 03, 2020 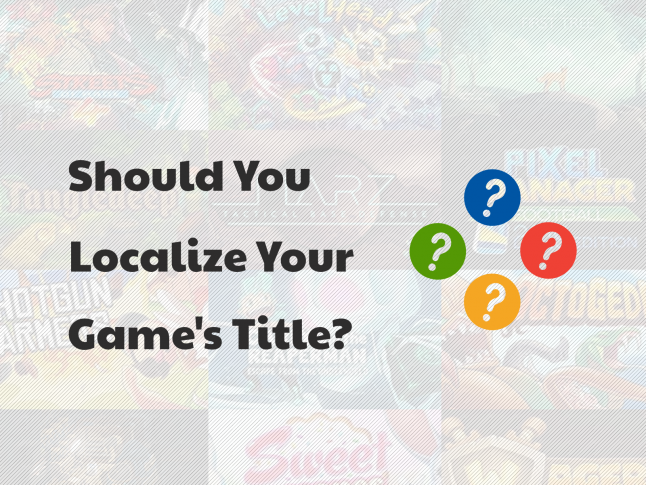 If you look at bigger, well-known IPs, franchise names often don’t get translated. Sometimes the subtitle might, but not always.

But for Pokémon, the title of each game gets translated. So, Pokémon Sword and Pokémon Shield become Pokémon Épée and Pokémon Bouclier—the literal translations of the words ‘sword’ and ‘shield’ in French.

So even within the same company, there are no set rules! Of course, with an indie title, you’re probably not working with a globally known IP, so here’s what you should ask yourself before you decide what to do with your title.

Is the name of your game a proper noun or made up?

More often than not, proper nouns don’t get translated. That includes names of places, people, or other single entities.

However, the title of the game remains Stardew Valley.

How long will it take until your game's localized version is released?

If it’s going to take more than a couple of weeks or months to release a localized version of your game, you probably shouldn't bother localizing the title.

For example, Night in the Woods was released in early 2017, and got a Japanese release in early 2019. The title wasn’t localized:

Night in the Woods isn’t any kind of proper noun. We know this isn’t just a case of laziness, because even the preview video on Steam got localized, in spite of the fact that many indie developers don’t bother to do this.

So why, then, is the title in English? Because by this point, the game got global recognition, and localizing the title may ultimately cause confusion. People not only expect a title at this point, but also a brand.

Does your game have a subtitle?

Many games have subtitles without necessarily being part of a larger IP or franchise. If yours has a subtitle that needs to be understood for the game’s context to make sense, then it might be wise to localize it.

Keep in mind that not all indie developers bother doing this, though, so while—in our opinion—it would have made sense to localize the subtitle in the following case, it’s really up to you.

This is the FR Steam page of Legend of Keepers: Career of a Dungeon Master, and as you can see, both the title and the subtitle were kept as is.

Is your game on mobile?

Planning on releasing your game on an app store? If so, consider the fact that potential players will be searching for certain keywords or genres, especially when they know what kind of games they enjoy.

The only other way people could find your game would be for you to make the top charts, which is unlikely to happen if they can’t find your game in the first place.

If the name of your game includes important information about its key selling point or genre, then yes, you should definitely go ahead and localize it!

By doing this, people will be able to search for your game on the app store, and when they come across your title, they’ll understand what your game is about—even if they don’t understand English.

If you’re still not sure, take a deep dive into the app store and see what other games in your genre are doing!

There are pros and cons no matter what you decide to do with your title.

Keeping your title original will be cheaper and will allow you to build brand awareness on a global level. However, localizing your title can help you with search terms and search engine optimization.

Every country and culture expects different things from their localized games. So, if you’re still not sure what to do, take inspiration from what other indie developers are doing in that language.

If you need guidance on what to do and want to end up with a polished localized game no matter which option you choose, we can help. Get in touch today and tell us about your game?