To get at the heart of the factors driving the positive and negative reviews of Cyberpunk 2077, my team analyzed 3,700 Metacritic reviews. This post highlights five takeaways from the analysis.
Angela Limoncelli
Blogger
January 27, 2021

Nearly eight  years after the first trailer appeared in January 2013, game developer CD Projekt Red (CDPR) finally released one of the most highly-anticipated games of the last decade: Cyberpunk 2077.

It’s no secret that the Cyberpunk 2077’s reception has been lukewarm at best. Since the game’s release on December 9, reports of bugs and glitches—ranging from frustrating to hysterical—flooded the internet. Complaints were so rampant that one of Sony’s customer service sites crashed  right before the company pulled the game from its online store.

Errors that slow or interfere with gameplay are beyond obnoxious, especially when gamers have waited for almost ten years to play a game. In many ways, this response was predictable. But bugs and glitches (even a few egregious ones) are standard for many releases. What’s less obvious is what people liked and disliked about the game itself.

To get at the heart of the factors driving the positive and negative reviews of Cyberpunk 2077, my team analyzed 3,700 Metacritic reviews written between December 11 and January 7. Collectively, this group gave the game an average score of 6.85 out of 10. But numeric ratings mean nothing without understanding gamers’ reasons for picking the rating.

Here are five insights about user scores that were both lower and higher than average:

1. People who played on a PC or Stadia had a more favorable opinion of the game than players using Xbox or Playstation consoles.

Segmenting the reviews by platform, it became clear that gamers are pleased with their cloud gaming experiences. While Stadia, Google’s cloud gaming platform, was the least frequently-used console amongst the 3,700 reviewers, these gamers had a significantly higher average user score. 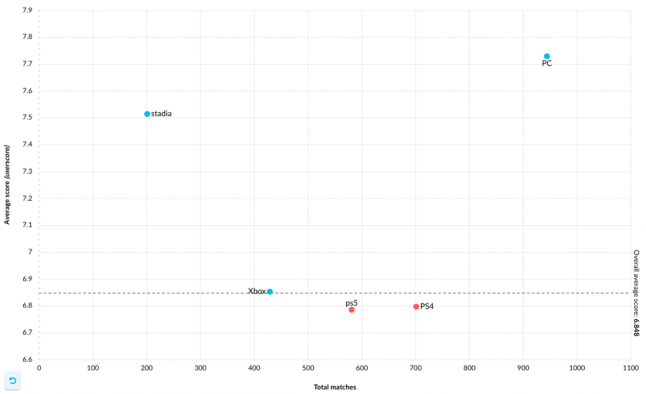 User scores on Xbox and Playstation consoles posted average rates between 6.8 and 6.9. In contrast, the 200 reviewers who played on Stadia reported an average user score of 7.5. One Stadia review suggested “buying on Stadia,” instead of playing on “older gen consoles”. Another said the “game ran smooth and is beautiful” on Stadia. And PC gamers had the highest average scores of above 7.7.

2. There were no positives amongst any gameplay elements, aside from a lone “AI” bright spot.

Unsurprisingly, nearly two thirds of the reviews (65.7%) mentioned “bugs” or “glitches.” In reviews that contained mentions of both “CDPR” and “release,” the most commonly talked about point was bugs. 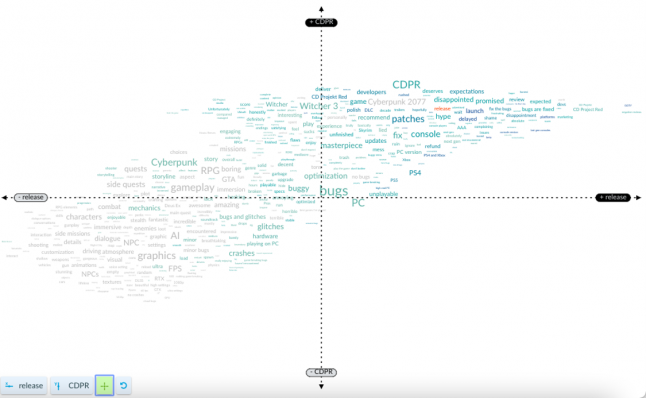 When digging into the data, the reason for negative reviews extended to nearly all elements of gameplay. On average, users that wrote specifically about a gameplay element—“driving”, “shooting”, “hacking”, “mechanics”, “stealth”, and “AI”—posted a below-average rating score. 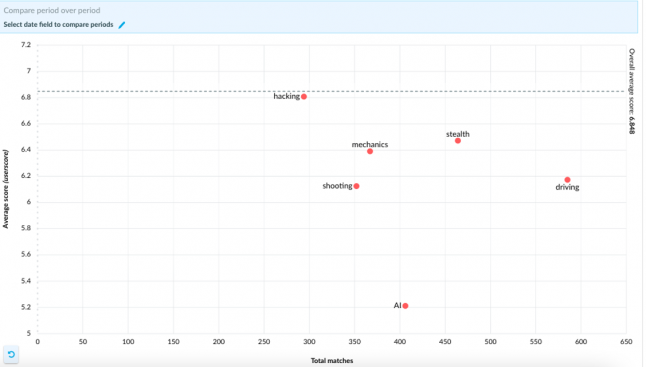 In the graphic above, you’ll notice reviews that discussed AI were associated with some of the lowest average user scores. But it’s worth noting that not all mentions of AI were referring to the same concept.

Some reviewers mention AI in reference to the AI that developers incorporated into the game, while others mention AI in reference to how AI was used as a storytelling element. Reviewers who mentioned AI as a storytelling element reported an above-average review for Cyberpunk 2077, while those talking about how AI was incorporated into the game reported overwhelmingly negative reviews.

3. There’s too much exposition in the game, and an abundance of meaningless choices.

On average, the 180 reviewers who wrote about “exposition” in Cyberpunk 2077 reported slightly below-average ratings for the game. 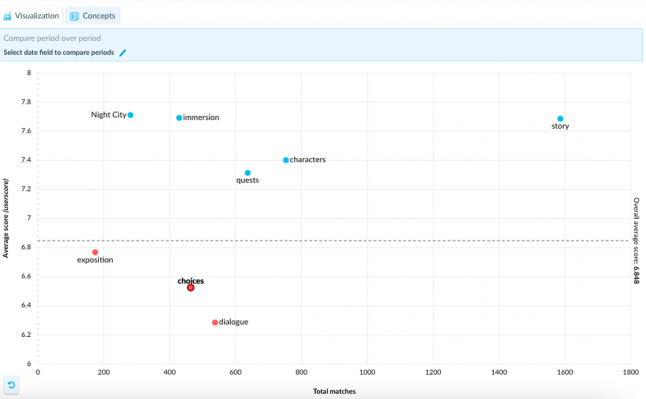 The two comments below illustrate how some praised the game as setting a “new standard” for exposition, while others  felt that there was just too much of it. 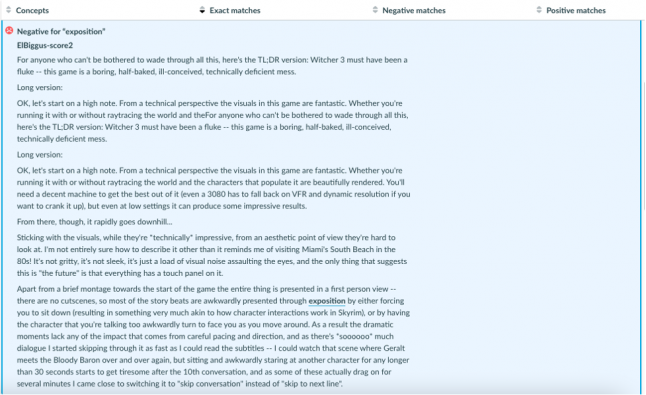 In the scatter plot above, you’ll see that the 430 reviewers who wrote about “choices” in Cyberpunk 2077 gave a lower-than-average score for the game.

In reading the open-ended responses, it becomes clear that people felt the choices, however numerous, did not enhance the game. One reviewer reported the game “lack[ed] variety in meaningful choices that alter gameplay. Another wrote “Some of the dialogue options have one choice. What’s the point of presenting me with a single choice…?” 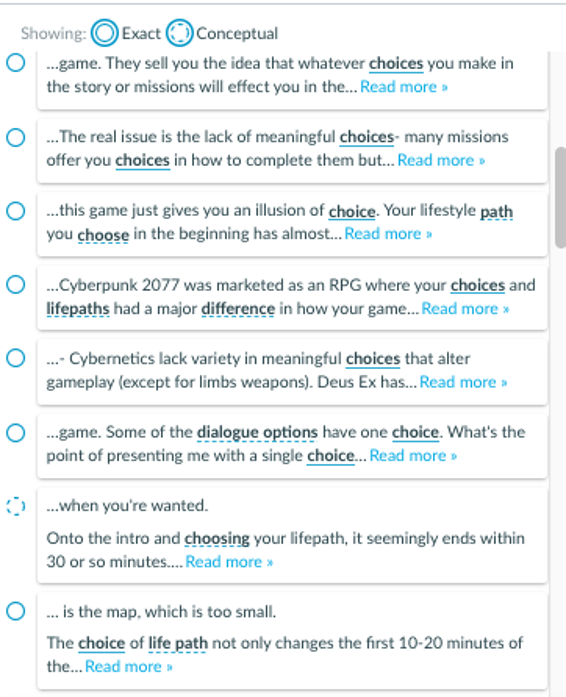 4. Reviewers aren’t sold on the patches … yet

In January, CDPR made a concerted effort to let everyone know that patches will continue to be rolled out in the coming year.

According to our analysis, reviewers still don’t view the patches as fixing their issues. When we looked at the most commonly mentioned words in reviews that contained both “CDPR” and “patches”, “gameplay”, “bugs”, and “fix” were words that most commonly came up, whereas compound concepts like “bugs are fixed” received fairly little attention. 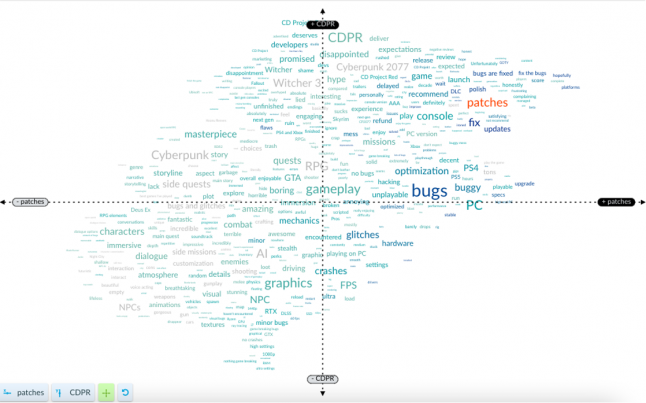 5. Keanu Reeves was one of the game’s only saving graces

I’ll  leave you with one fun fact. The 57 mentions of Keanu Reeves held overwhelmingly positive sentiment, with 71% of all mentions being positive. So perhaps the key to better reviews of—and experiences with—Cyberpunk 2077 is simply giving the public what they want: more Keanu.

In all seriousness, here’s the biggest takeaway from these 3,700 reviews: fixing the bugs associated with gameplay will get Cyberpunk 2077 a long way towards better user reviews, but players’ issues go way beyond glitches. Many aspects of the game–from the amount of exposition to the “choices” you can make throughout–are viewed less than favorably.