Video Game Deep Cuts: Not For Broadcast, The Longing Of Kirby 2

The latest highlights include looks at games including Not For Broadcast & The Longing, as well as a pretty odd video about Kirby, the history of Iran's game biz, the history of Dropmix, secrets in games, and tonnes more besides.Â
Simon Carless
Blogger
March 08, 2020 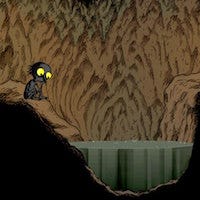 The latest highlights include looks at newer titles including Not For Broadcast & The Longing, as well as a pretty odd video about Kirby, the history of Iran's game biz, the history of Dropmix, secrets in games, and tonnes more besides.

The Longing: Patience (and lots of it) is required, but it’s worth every minute (Christopher Byrd / The Washington Post - ARTICLE)
"The Longing makes a mockery of the idea that games depend upon instant gratifications. It is a minimalist game that creates ample space for the mind to wander and philosophize along with the Shade as he considers his existential condition, his loneliness and his lack of control over his situation."

Core is a net platform aiming to be the YouTube of game development (Andrew Webster / The Verge - ARTICLE)
"Core is essentially split into two halves, each focused on a different part of the equation: the creators and the players. For creators, Core is a PC-based game creation tool built on top of Unreal Engine, Epic’s wildly popular game engine. The crux of Core is that it’s both fast and easy to use. [SIMON'S NOTE: this is in the interesting 'more accessible than Unity' game dev category, like Dreams and even Roblox - wonder what'll happen to these platforms.]"

Iran video games timeline: from 1970 to 2019 (Arash Hackimi, Saeed Zafarany, Brandon Sheffield / Gamasutra - ARTICLE)
"I’ve been doing a research project about Iran’s video games history focusing on how it began, and how it evolved. Through the course of my research I discovered that there were almost no articles in English on the subject, and of the few that exit, none are historical or research-based."

Eliza Explores the Benefits and Imperfections of Therapy (Holly Green / Paste Magazine - ARTICLE)
"The question about the practicality and ethics of personal data in digital health and mental wellness services is not a new one, but Eliza tackles it in an exploratory way that sincerely engages with the full implications of the idea. A mental health app, with its removal of the human assessment and feedback process, seems so impersonal and ineffective. But if it has any genuine ability to supplement certain forms of care, then it merits consideration."

Nvidia’s GeForce Now is becoming an important test for the future of cloud gaming (Nick Statt / The Verge - ARTICLE)
"Why would a game developer get to dictate the hardware its games are played on, and why would Nvidia need permission to make games a customer has already purchased on Steam available on a virtual machine? These are not trivial questions."

I stumbled into a wedding and stayed for the murder trial in an indie game's Discord roleplay (Lauren Morton / PC Gamer - ARTICLE)
"As part of the roleplay, server members vote on how to address scenarios Rose throws at them. Yes, Your Grace will similarly challenge players to make decisions about the Davern kingdom's future. Sometimes they have fanart contests. Other times they propose festivals. Occasionally Rose gathers them all for live events like the royal wedding. [SIMON'S NOTE: Congrats to the No More Robots/Brave At Night crew - whom I advise - on the v.successful launch of Yes, Your Grace - here's an informative video review from First Five.]"

What Makes a Great Secret? (Adam Millard / YouTube - VIDEO)
"Shh! Don't tell anyone, but video games have these things called secrets in them - and they're pretty cool! But what makes a good one? Well, the Architect has been sticking their distinct lack of a nose in where it doesn't belong and has come to some interesting conclusions - namely, that a good secret is one that's meant to be found... It makes more sense than it sounds."

The Artist Who Helped Create Crash, Spyro, and Jak and Daxter Has a Bone to Pick (Stacey Henley / EGM Now - ARTICLE)
"While Naughty Dog wanted to challenge Nintendo’s iconic characters and Sony had eyes on establishing Crash as PlayStation’s de facto mascot, Zembillas wasn’t some legend in the field specifically headhunted to make those dreams a reality. Instead, he was just an artist with a decent resume, a little bit down on his luck and willing to do something most artists of his era wouldn’t have even considered: work on a video game. [SIMON'S NOTE: a little bit of the 'semi-reliable witness' thing lurking in here, but interesting nonetheless!]"

Fire Emblem’s Manuela is a messy woman, and it’s inspirational (Patricia Hernandez / Polygon - ARTICLE)
"Surprisingly, the closest Little Women parallel I’ve experienced within video games is 2019’s Fire Emblem: Three Houses. On paper, Three Houses is a tactics game where you attend a prestigious school. In practice, it is a game largely about class, the complexity of gender roles, and how those factors intersect to make successful women lonely."

Money and Opportunity: the Hidden Costs of Cancelling GDC (Alistair Jones / Kotaku - ARTICLE)
"Henriksson said that despite its losses, Landfall had contributed to the fund “because it feels right,” and that while the studio is doing well, “for some indies, this cancellation has been financially devastating.” Fernando Rizo, CEO of publisher Modern Wolf, recognises that impact: “I was an indie dev once, making things work on shoestring budgets. A non-refundable plane ticket to the other side of the world represents actual time-to-live for a small business. That’s a very big deal.”"

The Silent Princess and the Great Deliverer (Drew Messinger-Michaels / ETAO - ARTICLE)
"I’m by no means the first to note the spiritual connection between Death Stranding and The Legend of Zelda: Breath of the Wild. They’re both games of expressive traversal across vast, spectacular, mostly-contiguous postapocalyptic landscapes. They both stress inventory management, and more generally an entrancing, compulsive relationship to stuff."

Apple Arcade is perfect for families (Andrew Webster / The Verge - ARTICLE)
"These games are all fun and approachable, but more importantly — because of the way that Apple Arcade works — they’re also experiences that I don’t need to worry about. And not just because they’re family-friendly content-wise (though that’s a relief as well). If these games had been on pretty much any other platform, they’d be rife with all kinds of virtual currencies and different ways to buy things in-game. But that doesn’t exist on Apple Arcade."

How ambitious music-mixing card game DropMix escaped obscurity to become a modern cult classic (Diego Arguello / Dicebreaker - ARTICLE)
"“I had heard of DropMix a year ago, but never saw it anywhere in person or knew much about it. I had a friend whom I played Rock Band with tell me about it, and I decided to ask for it for Christmas 2018 just as me and a couple of friends were starting to really get into board games,” user SodaStorm says. “I opened it up and lost literally an entire day to it.”"

The Most Beautiful Moment of the Generation (Jacob Geller / YouTube - VIDEO)
"One runs the risk of weeping a little, if one lets himself be tamed. [SIMON'S NOTE: as noted up front, 'this video discusses the final few minutes of The Last Guardian and Ico'.]"

Hideo Kojima’s Strange, Unforgettable Video-Game Worlds (Adrian Chen / New York Times - ARTICLE)
"Kojima is one of a very few video-game developers who can generate enormous anticipation for a game based on his name alone. Over his 30 years in the industry, he has come to exert the sort of reality-distorting effect on gamers that Steve Jobs did on electronics consumers, with an almost supernatural ability to persuade people to get onboard with ideas that would seem totally preposterous coming from anyone else."

Writing, directing, and designing FMV censorship simulator Not for Broadcast (John Harris / Gamasutra - ARTICLE)
"We spoke with the game's creator, director, writer, and artist Alex Paterson about Not for Broadcast, who explained the non-traditional background of the dev team and how Sam Barlow's Her Story informed the game's design."

Why Dicey Dungeons Wants to Teach You Irish (Oliver Luddy / Fanbyte - ARTICLE)
"...Partly as a result of Ireland’s long history as a British colony, our folklore and traditions feel apart from everyday life. Terry hopes to change all this. “I am really interested in Irish folklore and history and Dicey Dungeons has several light references to it,” he tells me. “Scáthach and Aoife from the Cú Chulainn prose Tochmarc Emire (The Wooing of Emer) both appear as bosses, while in some of Dicey’s campaigns you must face off against a Banshee.”"

Lair of the Clockwork God review – a very British genre mashup (Phil Iwaniuk / The Guardian - ARTICLE)
"Lair of the Clockwork God was always going to need to find a new take on an old and marginalised genre. But it succeeds in doing so, by cross-pollinating with platforming – and a particularly demanding type of platforming at that. If that sounds like a recipe for seething at your screen through a clenched jaw, it’s testament to writer-designers Dan Marshall and Ben Ward that far more often it’s a vessel for inventive puzzles and a distinctive brand of wry observational humour about game design."

Nintendo Red Tent Vs System: Weekend Pickup! (Tony / Arcade Blogger - ARTICLE)
"An unusual cabinet to share with you this week. Unusual in terms of what it is, and even more unusual to find one over here on European shores. The Nintendo Red Tent is a two-player cocktail style cabinet where players play facing each other on two separate monitors."