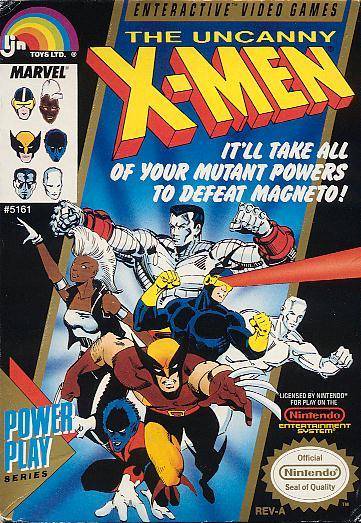 X-Men for the NES by LJN. Released in 1989, Despicable, despicable LJN (oh yes.. you know where this is going).

Already I am bracing myself for some hatemail for even choosing to review this game. This is a terrible game. But hey, at some point in my childhood I was looking forward to its release, and I even rented it. Thank the almighty heavens that I didn't actually by this horrible waste of plastic and microchips.

I can see the original design doc; someone scored a wonderful license and pitched it to their publisher "how about we take this popular game called Gauntlet and replace the characters with.. the X-Men from Marvel comics?" It must have seemed like an easy money idea. All they had to do was hire a capable development staff..

Instead, they must have hired some pretty hungover recent divorcee's, because this game feels like it was assembled by people who hated their lives. The graphics were terrible, the gameplay was miserable, and.. well.. at least the box art was compelling. I remember even "We Never Hate on Anything" Nintendo Power Magazine called out the screenshots for looking pretty grubby. Still, this one sat in the oven for a rather extended period, so looks aside, it seemed like they might turn out something tight..

Ah well. My buddy's friend bought this, he was as excited about X-Men as any 14-year-old-kid was - and he seriously wanted to cry. I kind of wanted to beat him up for even owning this. It's still comical to look back at this and see what they thought they could get away with. For shame!

I guess I should mention the gameplay at least. You controlled a team of two X-Men at a time (I think you could switch back and forth between each one, or something) and you had to battle through different worlds looking for keys and computer disks, eventually taking down bosses. Unfortunately, the whole game was full of underpowered heroes that stood around and died all day while worms and blobby things relentlessly attacked them. Cheap and crappy!