Retro Game of the Day! Who Framed Roger Rabbit? 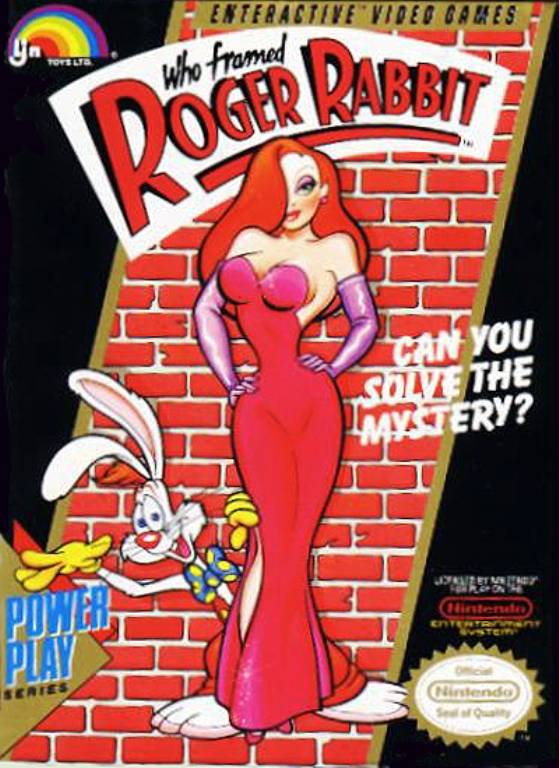 Who Framed Roger Rabbit? by Rare, published by LJN - NES release in 1989. 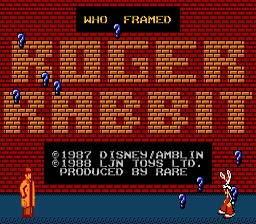 So, here we have what is certainly one of the stranger titles released for the NES. This was based on a landmark film released a year earlier; the movie was unprecedented in it's marriage of live-action and cartoon characters. The world was rich, colorful, and amazing, and it seemed like it would lend itself wonderfully to a videogame. 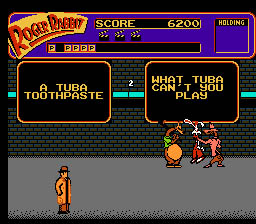 Rather than going for a straight-up action game as might have been more fitting for a game of this sort, they decided to go a different route and turned out an adventure game instead. Light on action, you spend most of the game looking for clues and searching for items. It was, admittedly, pretty cool to see all the different items you could pick up, and their various uses, but looking through the bland-looking buildings "searching.. searching... searching" got old pretty quickly. 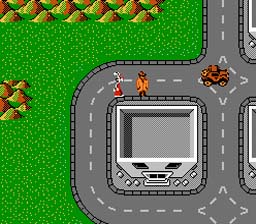 The game had two main modes, a side-view presentation and an eagle's-eye map. You'd wander with your two heroes through the bleak city, occasionally hitching a ride with Benny the Cab (which was pretty neat, and he was well-rendered). A bouncy little soundtrack bopped along in the background to spur you on. Frustratingly, it was easy to get hurt/die as lots of things were out to get you (falling plants, rats, shoes that walk by themselves.. yep, it was one of those games). 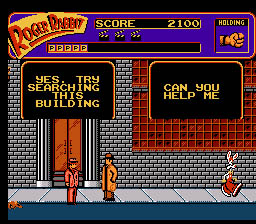 Roger Rabbit was an extremely unusual game that you either liked OK or you just abhored completely. It was cool that they tried to do something different than all the other "me-too" games of the time and for that it was definitely noteworthy, and enjoyable. Unfortunately, the presentation was fairly bland and there was a good chunk of soul which felt like it was missing from the game (and Rare is a company which should have plenty of that!) An interesting diversion, though not a necessity.