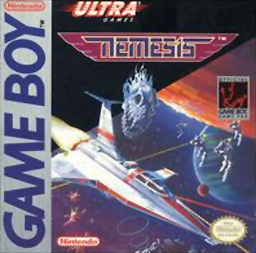 Nemesis for Nintendo's GameBoy, by Ultra/Konami. Oh who am I kidding, just Konami. This released shortly into the system's lifespan in early 1990.

Konami, ever the "go to guy" for responsible and solid gaming during the thrust of it's (continuing) tenure as a major-player developer and publisher, saw fit to grace the pea-green system with a version of its venerable shooter series Gradius, known in Japan as Nemesis (and originally maintaining the name over here as well.. not sure what the thinking was). How does the game hold up?

Much like Konami's other early efforts on the system - beautiful graphics (likewise Castlevania: The Adventure) and just dumb fun (like Motocross Maniacs). As noted, this was an early release so there was not much to expect - and when the title delivered a good playable game, everyone in the world (even people in prison, and homeless folks) was overcome with joy and relief.

Also like Castlevania, Nemesis suffered from a bit of the smear-o-vision, as the GB's display wasn't really designed with the intention of moving lots of heavily-detailed sprites across a scrolling playfield (eh?) But the game looked so good and was such a blast that it was forgivable, at the time.

The usual Gradius rules apply here.. pick up power-ups. Choose your upgrades. Pick some options, let loose a laser or two, surround yourself with a force shield (There's no shame). Blast some Easter Island heads. Blow away the core of "that Gradius Ship".

Again, we have another game which looks quite dated and is clearly a page out of history - but Nemesis was absolutely one of the very first of the relatively hi-level arcade/console "big games" to be ambitiously ported down to the New Kid on the Block. I said it back then, I'll say it again - they did a marvelous job!