Retro Game of the Day! Junction 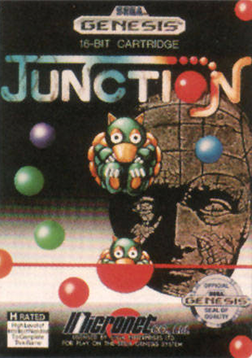 In the early days of the Sega Genesis, there was a nice slew of software released at launch and a small trickle followed afterward. Unfortunately, any head of steam built up was quickly worn down as there was just not much to enjoy once you tired of beating Ghouls 'n Ghosts or clearing Altered Beast for the umpteenth time. Nintendo still maintained a strangehold on the console licensee market and not many third parties were eager to upset the giant and jump into development just yet for the rival consoles; less well-known companies got their chance to step up in the meantime and take center stage with their goods.

Seeing a game like Junction advertised in the magazines at the time was not unusual, then. Just by virtue of its being a 16-bit game, it automatically generated interest (even if it was not a known franchise, and in spite of the fact that it looked like some kind of board game). In face this was quite unusual, as video board games on consoles were generally few and far between. All of these things being the case (and because it made me think of Zoom!), I didn't bother with Junction (though I was always curious about it!)

The game simply puts you in command of a table with a ball rolling over it. Much like those old plastic sliding puzzles which many remember from their childhood, this requires that you manipulate the pieces such that the ball will roll over several special long white pieces in order to clear a board. Mess it up and you lose a turn! The ball rolls of its own accord, although you can speed it up if you like. Several obstacles are in place to help (or hinder) your progress.

In hindsight, the game is really not bad and it is fairly novel and well-presented for what it is. It's easy to see why it flopped on the Genesis (see the reasons mentioned earlier!) but that is a shame as the game was not only different, but well-thought-out and fairly packed with content. It's a game which holds up now and wouldn't seem out of place on a mobile device (I am sure there's "grandchildren" versions of this available). These types of puzzlers have their fans, and it is recommend it based on that merit.