Retro Game of the Day! Hyperzone 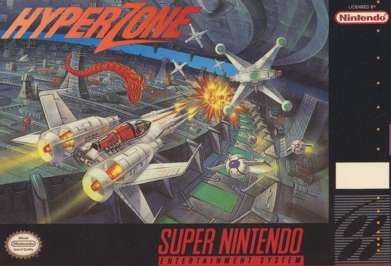 Hyperzone by HAL labs, released shortly into the SNES' lifespan in 1991.

Yes... Hal. they made Kirby. they made Kabuki Quantum Fighter. Of course they made Smash Bros. And they also made what should have been a much more represented genre on the SNES, but strangely it wasn't - the on-rails cyber shooter, presented in glorious pixelated Mode 7.

So what of Hyperzone then? Effectively, this is something of a crossbreed of rail shooters such as Space Harrier and racing games like F-Zero. Unlike the latter, there wasn't really any racing going on here, but the presentation was quite similar (and certainly the tech matched quite well). You control a ship flying into the screen - your mission is to merely blast the baddies, enjoy the scenery and music, and just.. try not to get shot down too much alright kid? These space pods don't grow on trees ya know.

Of course, this game has the distinguishing feature of letting you actually fight against a SNES controller. Imagine that! Otherwise, not much going for it - Hyperzone might have some fans, but really it's quite a boring little ride. As I say for many games of this ilk, it looks good and holds some promise - I'd still love to play a game with tech like this but some actual meat on its bones, gameplay-wise. Perhaps there's some wind in those sails yet! Check out Hyperzone for a look back at yesteryear, when games that looked like this sold SNES units - but remember what came after was the real meat and potatoes!