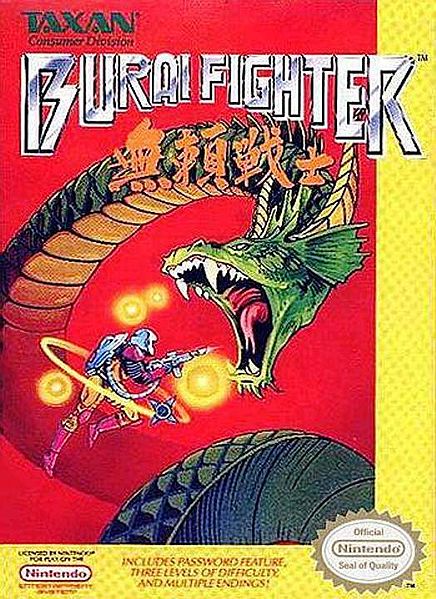 Burai Fighter by Taxan, released for the NES in 1990.

Ah, Taxan. They were one of the lesser-known companies on the 8-bit Nintendo scene. Always kinda there, putting their games out, everything they made had a certain look to it where it didn't look at all bad.. just not very interesting, somehow or other. That was kind of a cardinal sin, in the days when developers like Konami, Sunsoft and Capcom were truly bringing their A-games to the system.

And that's just the thing; Taxan's games weren't only well-meaning, but they were actually well-assembled, and different enough (if derivative) to merit attention. There were plenty of lesser developers who seemed much more successful with their software lineups. But this is how it goes in any industry, and as usual timing is everything. 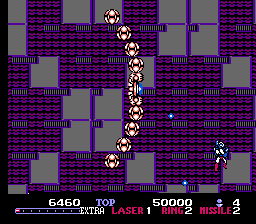 When Burai Fighter was announced, it raised some flags (in a good way). Side-scrolling shooters, while passe', were never really overdone in the NES for technical reasons. This one looked like it might sit alongside the best of them, between the features it toughted and the vibe it gave off. Immediately it felt like it could be the NES version of Side Arms or Forgotten Worlds, and at the very least take a cue from what Section Z did (hmm, all Capcom games..) The game ended up recalling elements of those shooters, but (admirably enough) doing it's own thing as well. Bristling with firepower, your fighter could shoot in multiple directions as you floated through each screen - and each level would scroll multiple directions as well, which was quite unusual for this sort of game. Burai Fighter would seamlessly switch between being a side-scrolling blaster and an overhead shooter, and this was something new. The gameplay pulled off quite nicely. 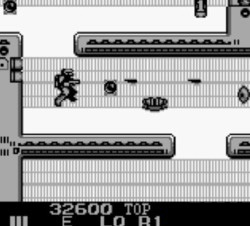 So what was the big problem? The presentation was a little rough. The game just looks funky, and again this is owing to an issue with Taxan games in general. The graphics are detailed, but often garishly colored and the overall feeling is just almost goofy as a result. This might have sailed by, had there not just been so many other very good-looking games of the sort available (particularly, Konami's line of shooters). Adding insult to injury, the game released fairly late into the NES' lifespan, and it was difficult to get excited for the aesthetics of a game like this when compared to many of the much more interesting-looking 16-bit shooters that were starting to blanket the scene.

Burai Fighter is not a bad game at all - it's actually quite fun, have a look at the YouTube video and it's not hard to imagine how much more this game could've sold if they had just spruced up the presentation. There is a black and white GameBoy "deluxe" version (hmm, how does that work?) which is also worth investigating as well.