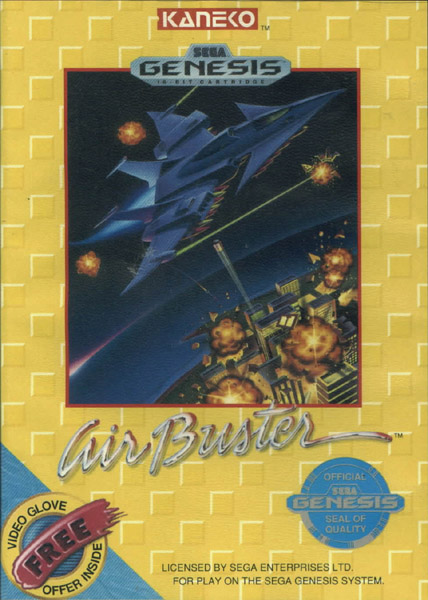 So then! Back in the day, as longtime readers of Retro Game of the Day might be able to tell you, I was quite the shmup fan. Games where you controlled a little ship and the screen scrolled continuously, with oodles of little alien enemies were constantly trying to blow you to smithereens, those were absolutely my bag. I especially was partial to these horizontal ones, or horzies as the true geeks call 'em. Air Buster was another one which I had a keen eye on. 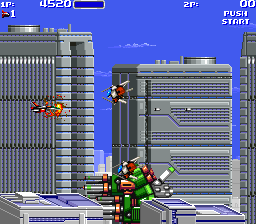 Sadly, AB took it's time in finding a release date; a game I was quite interested in for awhile, by the time it did actually see the light of day I wasn't so keep on picking it up. Nevertheless, I gave it a rental. I found what was certainly a nice colorful shooter, lots of parallax (always a treat!), lots of well-animated cyber-baddies trying to blow you out of the sky. 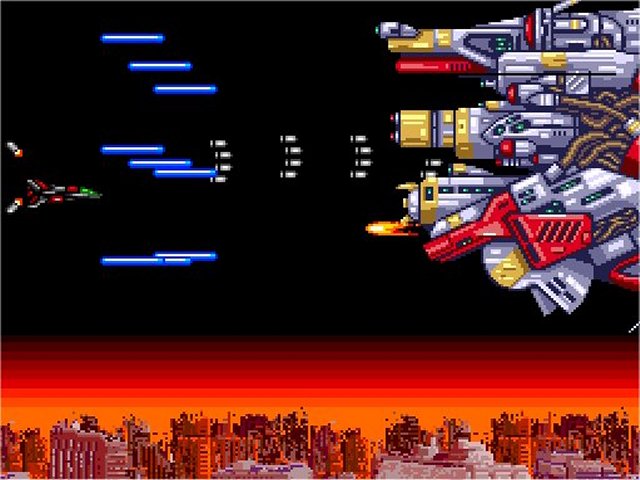 A nice touch for this game was that it started out right over the ocean and then a futuristic city, something that was unusual for shooters in the day (most of them were set against your standard asteroid belt or some such typical space setting). Not bad, those just got boring after awhile, so this was a nice change of pace. To top it off,the whole city gets completely leveled partway through the first stage.. unsettling, but awesome! Getting into the game, you notice that there's these big.. ugly.. flying garbage canisters which must be shot to deploy a whole payload of poweruppy goodness. The canisters looked stupid and were sort of a turnoff.. but the giant explosion of POWs was welcome for certain. 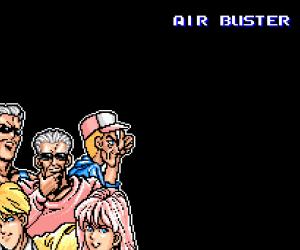 At the end of the day, AB is just another shooter with a couple of nice things going for it; very unique to this game was that it's on a short list of 2-Player side-scrolling shooters, and that alone makes it worth investigation. Also unusual is its' load screen (in a cartridge, wha?) and the fact that a version released for the TurboGrafx-16 as well, under the name Aero Blasters (with somewhat better graphics, I do recall). Also.. man, that boxart is hideous. Still, if shooters are your thing, and especially if you've got a buddy handy, you guys might wanna give Air Buster the once-over.