Postmortem: Hymn of the Sands

A postmortem of capstone project "Hymn of the Sands" by a producer at the Guildhall at SMU.
Dustin Davis
Blogger
December 18, 2013

Today marks the end of a five month capstone project by Working as Intended Studios, a team of graduate students at the Guildhall at SMU.  Our project was to create a game demo in the time given.  I joined the team as producer about a month into development, after Proof of Concept Gameplay, making me the fourteenth team member.

From the start, the team had very few limitations on their design - they had to work in UDK and the game couldn't be exclusively first-person.  Other than that, the rest was up to us, so long as we make a fully-working demo that showed what we were capable of.

At the time I joined the team, they had the game type (puzzle and isometric action) theme (Egyptian gods) and a rough art style figured out, sample combat mechanics working, examples of traps and enemies, and a version of our core game mechanic: Realm Shifting.

Unlike other projects I've produced at the Guildhall, from my perspective the development of this game was notable mainly for its steady progress.  Now that may not sound interesting, and we certainly had problems and challenges, but from my first day on the project to today, the game got better and more complete.  We somehow made it through wihout any of the dramatic stops and starts that can come with game development, and student projects in particular. 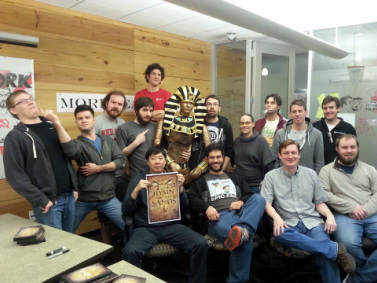 The following list is a few points brought up during the postmortem our team discussed today.

What we would fix:

My experience on Hymn was a highlight of my time at the Guildhall, and was one of those fortunate times where you can easily see the value of your influence on a team.  I'm graduating this month, while the rest of my team has another semester remaining at the Guildhall.  I wish my team the best, and hope to work with them again somewhere out there in the industry.