How to optimise your Steam page as an indie developer?

Practical steps to optimising the Steam game page - from description to screenshots and tags. This article goes through some of the most successful indie games and analyses what their Steam pages do well.
Karl Kontus
Blogger
March 08, 2021

This article has been written by the creators of Video Game Insights – a free games market trends website. It’s a follow-up deep-dive to our article on indie game marketing tips, available on ‘15-point marketing guide for small indie game developers’

Steam page optimisation and its impact to sales is often underappreciated by new indie developers. There are some easy and straightforward steps that can make a big difference as well as some less obvious ways to improve your page.

This article goes through some of the most popular and successful indie games and analyses what their Steam pages do well.

We reviewed 15 of the most popular indie games released over the last 3 years to draw conclusions on what they’re doing. They’re games like Hades, Rust, Factorio, Rimworld, Raft and Space Engineers – a mix of genres and publishing methods.

It became incredibly obvious when researching for this article that there are a few rules of thumb that make a big difference on your Steam page. The most important of which is to tell the players exactly what they’re buying.

Think back to when you’ve bought Steam games. When it was a new game you found, what did you base your decision on? Did you care more about knowing the main character’s background story or the fact that it was a multiplayer open world RPG with city building elements?

Tell your potential players exactly what they’d be buying. Leave the lore for when they’ve bought it.

The first thing anyone will see on the games page are the screenshots. Therefore, it makes sense to prioritise this and to make sure you really get this right. The most successful indie games all follow a very similar pattern.

For example, Valheim has screenshots of both glorious exploration views as well as smithing with your friends, effectively summarising the key features of the game. Check out their Steam page for more detail. 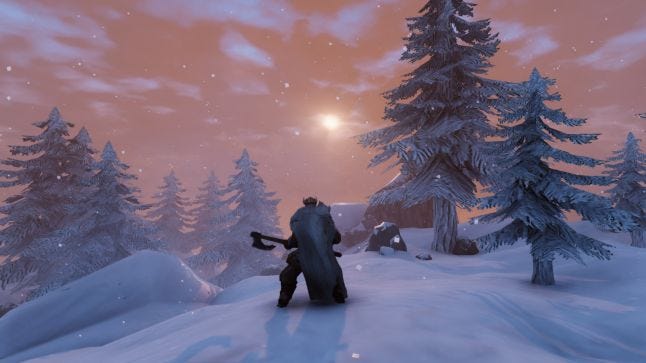 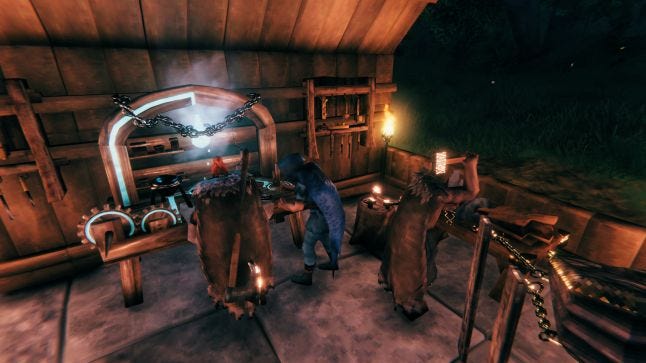 These games also had a lot of screenshots – 18, on average. That being said, there were quite a few games such as Hades that had only 9-11 screenshots and still did very well. 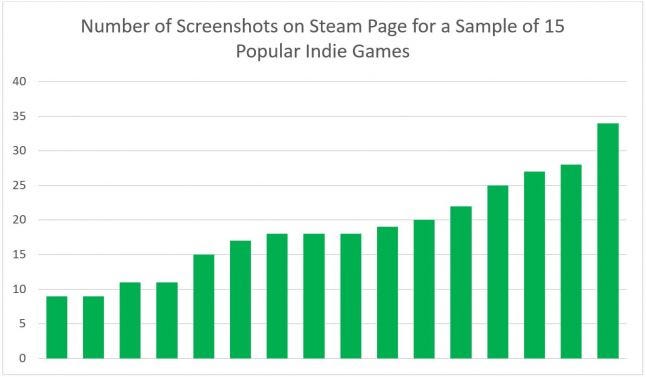 Takeaway: Have a diverse set of gameplay pictures that demonstrate the game play elements as well as the art style.

Everyone has trailers, but they don’t have to be complex and time consuming

All of the best performing indie games covered had trailers, most of them had 2-3 of them. It’s not the first thing people typically look at. However, it can be an important final push towards a purchase.

Trailers can be time-consuming to make and I can see why some indies would not go down that route. If you do, however, there are some dos and don’ts.

The trailers of every game I reviewed followed the same principles as the screenshots. They were concise and focused on gameplay and mechanics. They didn’t include long cinematic intros giving an in-depth overview of the game world. There was no history of the struggles of the Kingdom or whatnot.

Cinematic trailers with limited gameplay footage are something that only AAA games can afford to use. Indies need to show their goods.

When looking at the most successful indie games, their descriptions always follow a similar structure. They’re short, to the point and talk about the gameplay and core mechanics.

I’ve highlighted some examples below where the games had described exactly what the character can expect.

“Space Engineers is a sandbox game about engineering, construction, exploration and survival in space and on planets. Players build space ships, space stations, planetary outposts of various sizes and uses, pilot ships and travel through space to explore planets and gather resources to survive.” 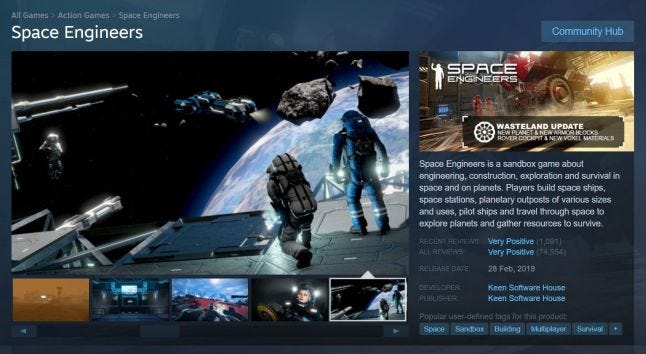 Space Engineers is an excellent example or a description that only focuses on gameplay. You immediately know if that’s the type of game you’d enjoy or not.

“Factorio is a game about building and creating automated factories to produce items of increasing complexity, within an infinite 2D world. Use your imagination to design your factory, combine simple elements into ingenious structures, and finally protect it from the creatures who don't really like you.”

This is another good example of focusing on what you can do in the game. This description, combined with screenshots and sub-genre defining tags, gives an exhaustive overview to the potential buyer.

When I looked at a random section of not so popular indie games, I found most of them not to follow this simple rule:

“The great warrior Archibald challenged Glass and now his mission is to walk to the Crystal City, defeating all the vassals of the king.” – This description doesn’t give me anything.

The tags are adventure, indie and casual – again, not very descriptive.

“It’s a 2D platformer with realistic physics where a great warrior, a stick figure called Archibald, takes on the vassals of the king.” would have been infinitely better.

“It's time to take the Plunge! Enter the adventure of Billie, the billionth prisoner who longs to find freedom on the other side. Dodge, dash, and defeat a wide variety of guards, creatures, and otherworldly beings bent on preventing Billie's passage in this exciting turn-based dungeon plunger!”

Takeaway: Focus on the gameplay and core mechanics. Do not use this as a story or lore demonstration unless your game is purely defined by that.

Tags should focus on the genre and gameplay

At this point, you’ll probably guess what the trend is here

Things NOT to highlight

Over 1,000 games have tagged character customisation. I mean, if that’s the defining tag in your game, chances are you’ve got bigger issues than properly tagging your steam game. Only include the real core gameplay elements.

Takeaway: People search for specific games to play, so tailor your tags around it. Sub-genres and themes are critical.

Long description can go more into lore, but should still highlight the key features

The top games vary more in terms of the long description. Some get more into the lore and start to immerse the player to the game world already. Others give a much more detailed overview of the mechanics. The majority of the top games, however, list the key features here.

Takeaway: You can be more creative with this section. It’s still worth highlighting the features in more detail though. This is especially true if your game has many different elements and mechanics.

Everyone gets positive reviews. Make sure your negative ones aren’t deal-breakers

All games also get at least some negative reviews. Don’t worry about this too much, unless they are deal-breakers – critical bugs, too little content for the price you charge, terrible gameplay mechanics etc.

Optimising your Steam page really matters, just do it!

Chris Zukowski has written an excellent article on why Steam page optimisation actually matters. He’s done a much better job summarising it than I could, so check it out.

In short, this will improve your funnel metrics, and, therefore, impact any additional marketing or publicity you might get. The impact can be bigger than having a good feature during a Steam Festival!

It’s easy and there are no excuses for not doing it.

If you found this article insightful, you might want to check out our free Video Game Insights Steam stats platform with Steam trends, game revenue estimates and more!