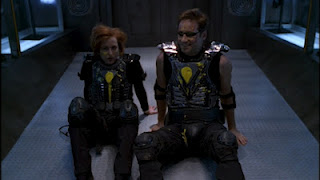 A version of this post originally appeared on Experience Points.

Ever since I discovered that the entire run of The X-Files was on Netflix streaming, I've been devouring episodes at an alarming rate.

Imagine my delight when I came upon an episode called, "First Person Shooter." Yup, it was time for Mulder and Scully to enter the mysterious world of video games. I'm always a sucker when it comes to analyzing how games are portrayed on the small screen, so let's see what this episode says about our beloved medium.

Mulder and Scully are sent to investigate a mysterious death at a video game company that specializes in making extremely realistic virtual reality shooters. Of course, before they can even talk to anyone, they have to go through more security than they encounter when trying to get into the FBI building to go to work.

Badges, retinal scans, private security goons, harsh NDAs; it's all only slightly more extreme than the steps real game companies take to hide their own trade secrets. Now, if your game company is designing games that can literally murder people, I can understand the need for secrecy.

The fact that it closely resembles the steps real publishers take to hide information just highlights how silly the pre-release/hype machine actually is. Imagine the chaos that would ensue should people learn the number of grenades you can carry in the next Call of Duty!

The crux of the episode revolves around a digital femme fatale AI who goes rogue and starts killing players. Of course, she conducts business burdened only by the most minimal amount of clothing. The twist (you knew this was coming) was that the AI was originally created by a female programmer as a side project to undercut the testosterone-laden environment in which she worked.

Putting aside the killer AI for a moment, it's still a familiar story in the video game industry. Blockbuster titles are still overwhelmingly created by men and targeted at traditionally male audiences. Power fantasies, scantily-clad women, and explosions defined the X-Files' fictional game, but such characteristics apply equally well to any number of popular shooters we play today. Scully skewers games as immature hobbies made for men to "get their ya-yas out," and she's not wrong. Unfortunately, she also dismisses any women that might be interested in the medium (an oversight which almost leads to her demise).

It's also important to consider the historical context in which the episode was released. In early 2000, the frat house environments of companies like id Software, 3D Realms, and Epic Games reigned supreme. The CEO of the fictional game company is a dark cross between David Jaffe and John Carmack, one obsessed with both technological and design matters but blind to any consideration for inclusivity. Probably even more so than it is today, shooter development in the late 1990s and early 2000s was a boys' club.

The FPS company brings in the legendary Daryl Musashi to figure out what went wrong in the game. Everyone except Scully regards him with a hushed awe, as he is world's premier gamer; someone that seems to be naturally in tune with the program. The preternaturally-skilled Asian kid is a persistent stereotype, one that I'm sure people have (or will) study for some time.

After all, we talk about Justin Wong and Daigo Umehara the same way folks talked about Dennis "Thresh" Fong back in the heyday of Quake. Who knows if the writers (William Gibson(!) and Tom Maddox) knew about this real life analog? I made the connection. Of course, I may have been acting the fanboy just like Mulder and the rest of the geeks.

The Search for Immersion

The episode relies heavily on the assumption that the holodeck is the holy grail of games, that with sufficiently advanced technology, we can physically enter a game. All this makes sense in the context of the late 1990s and early 2000s, during the hardware wars and graphics card competitions. However, after the turn of the century, something unexpected happened that disrupted this vision of the future.

Instead of retreating into game worlds, we're pulling games into our world. The rise of social networks and new platforms like iOS have blurred the line between where a game ends and where everyday life begins. We're not wearing goggles or haptic gloves, but many of us are under a constant barrage of game-related information. Push notifications, status updates, email reminders that it's your turn to move in a dozen different Facebook games get mixed into the everyday tasks of life. Games have become increasingly immersive thanks to social tools rather than virtual reality.

In the alternate reality of this X-Files episode, a game like Rage would be more important than Angry Birds, since it pushes us closer to photorealism and theoretically draws us further into the game. In our world it's the opposite: games like Angry Birds are designed for us to draw them into our world and integrate them into our daily routines. It's not the kind of immersion we dreamed of in the late 1990s; it's a much weirder, unexpected, gradual phenomenon.

In a shocking display of prescience, about 75% of "First Person Shooter's" action sequences involve people taking cover behind chest-high walls and shooting dudes (and dudettes). Also, Scully's big move to save the day was basically one extended turret sequence in which I discovered that watching such a scene is about as dull as playing through one.

Arbitrary cover and boring turret sequences in the year 2000? Are we just supposed to think that the episode was ahead of its time? I, for one, am not buying it. I've watched enough X-Files to know that somewhere, there is an ominous, cigarette-smoking man who visits every major publisher to "convince" them of the need for chest-high walls.

To what end, you ask? I hesitate to guess, but I should point out that a human-sized chest-high wall would offer the more diminutive Grey nearly full-body protection. Think about it. The truth is out there.