How to Craft Challenges with Sculptable Difficulty

Today's post looks at the concept of sculptable difficulty; giving players the ability to essentially customize the difficulty of your game.
Josh Bycer
Blogger
December 06, 2016

Games that feature sculptable difficulty typically have a combination of player skill and abstracted design, as you need to have multiple ways to challenge the player and impact the play.

In this way, players can make a game easier if they're having a tough time, or harder if they want to push things, as our examples will demonstrate.

The examples that I want to talk about today are some of my favorite games in recent years. The first is my long-time favorite The World Ends With You. I've talked about it multiple times, so I don't want to repeat myself too much.

The game allows you to impact the difficulty based on the setting, the number of enemy groups you'll fight and your max health going in. These factors determine how much experience and money you get, the chance of getting different items and their quality.

The player can change these settings at any time outside of combat. There is a baseline that the player can keep to, but they are always tempted to make things harder for greater rewards.

Bastion takes things further with specific difficulty totems that change the game for each one used. These totems impact the enemies and alter their abilities during play.

The more totems active, the more experience the player gets. There is a big difference between playing Bastion without the totems vs. having all eight on. The follow up from Super Giant Games Transistor also allows you to alter the difficulty.

Our final example is Kid Icarus Uprising who literally has a difficulty scale between 1 and 10. The harder the player makes the game, the higher quality in terms of weapons they'll find.

The game opens up extra hard paths with more rewards if the player is playing at or higher than the difficulty rating.

With those examples said, we can turn to the challenges of designing a game in such a matter.

You can tell the difference between developers who think about the game's difficulty setting as part of the design, and those that rush through it. The games that work have difficulty settings balanced with the experience. The ones that don't typically feature difficulty scaled so far up that it makes the game a slog to play through.

Games built on only player skill, such as platformers, aren't good candidates for sculptable difficulty. The reason is that there must be abstracted elements to modify.

Looking at games like Bastion and Kid Icarus Uprising, they both have a baseline or normal play. You must get the baseline set before you begin designing modifiers. This point should be obvious, but needs to be said: Your game should be beatable with any and all modifiers on. Try not to have modifiers on top of set difficulty values, as that can add complexity on top of complexity. 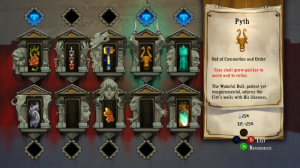 Our final point goes back to the rewards. There must be a reason beyond just recognition for modifying the game. This serves two purposes.

First, it allows expert players to get something in return for making the game harder. And second, it gives newer players a reason to improve and see more of the game and get rewarded at the same time.

Getting it Just Right:

Sculptable difficulty is one of those elements that has to be a part of your design from the very start and integrated in. Even though it won't fit in every game design or genre, it can certainly elevate a game's design when it works.

Besides the games mentioned, can you think of other examples of games that featured sculptable difficulty? If so, be sure to leave a comment about them below.