How OK/NORMAL meditates on the endless loop stage

How OK/NORMAL uses an uncharacteristically long segment to harness mundanity and get inside the player's head
Matt Morey
Blogger
January 13, 2021

This article will contain spoilers for the game OK/NORMAL. If you are interested in playing it before reading, it is cheap and can be finished in one playthrough.

Pacing in your kitchen while your coffee brews. Being stuck in a traffic standstill. Waiting in line at the store when you don't have your phone. Spending yet another day quarantined in your home. Boredom and anxiety are closely linked, and OK/NORMAL gets this.

Published in 2018, OK/NORMAL is the first game by 98Demake, a youtuber who makes popular animated “demakes”—short mock-ups of games like Assassins Creed or Dark Souls—in the chunky style of PS1 games. He even creates the box art, blurbs and all. What he brings to the table with OK/NORMAL is a short, vaporwave descent through PS1-era graphics on floating walkways surrounded by darkly psychedelic skyboxes, all presented on a CRT screen.

While more could be said about its messages and presentation, I want to focus on a later stage in OK/NORMAL. The map's relatively long size and pacing is an abrupt change from the rest of the short levels, and teases the player into wasting their time whilst also hooking them to do it longer. It can induce a panicked and fatigued state in the player. How does it achieve this?

In the typical stage, the player inexplicably navigates their Greek statue levitating on a Playstation, and his smiley face cloud companion. All they need to do is collect a dozen items of food or pills to get to the next level. It begins normally, but after a couple maps the player sees a tone change with twisted screen filters, disturbing objects, and heartbeat ambient sounds. “Is this,” the cloud begins to ask, “normal?” One would be forgiven for thinking “hell.” 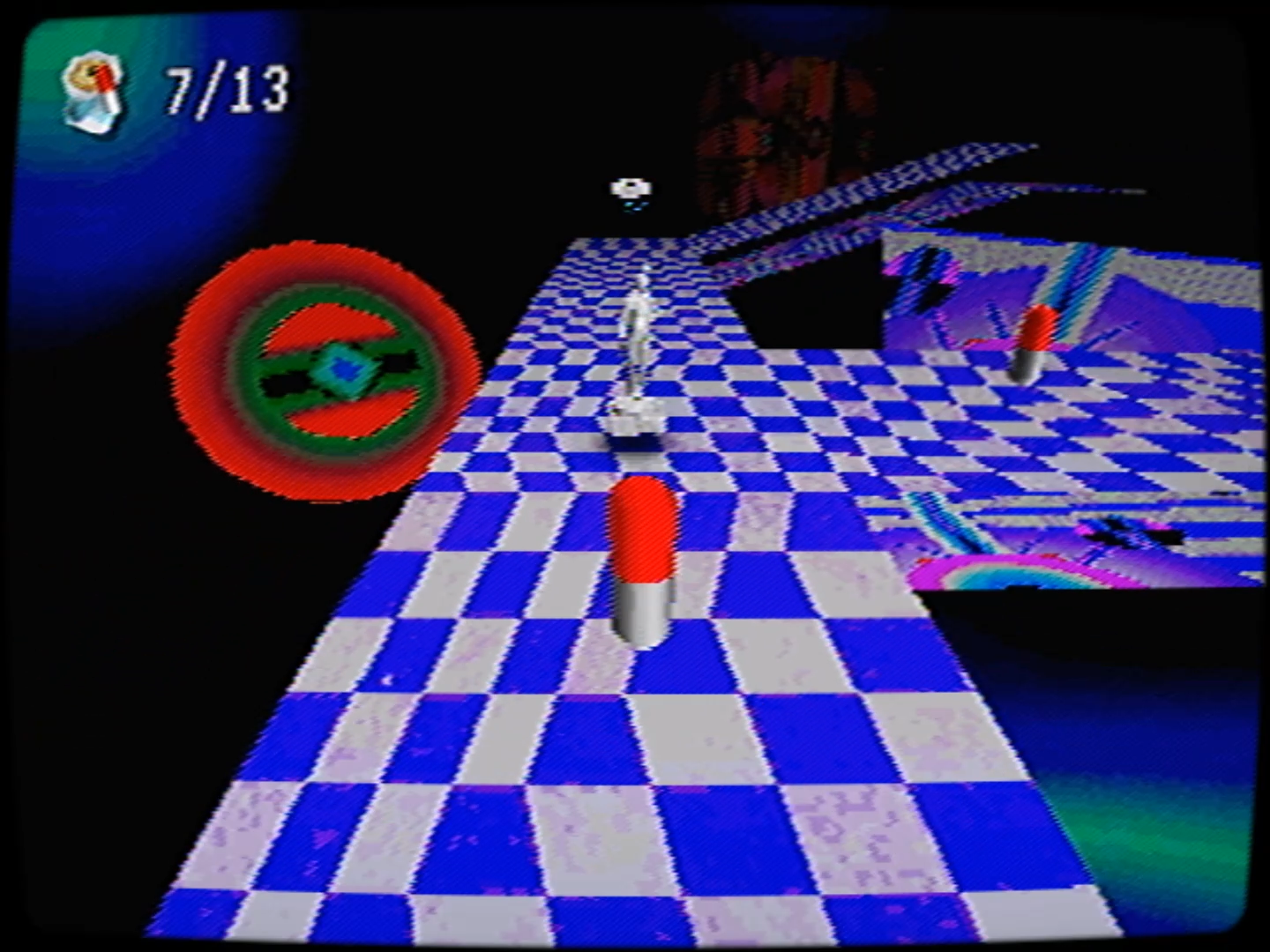 Even though the initial maps are creepy, there is also momentum and novelty. The tiles change color; the UI glitches; a fog overlay relaxes on the environment. Once you collect enough food and pills, counted in the top, you warp to the next map, sometimes eerily similar to an earlier one. And then there’s that stage.

After about 10 maps and 20 minutes, the player unassumingly reaches the heart of the game—a zone featuring eye-ball dice and crimson rock tiles—which tasks you with collecting six keys. It begins like any other, but it feels more peaceful and spacious, so you can catch your breath. It is a larger map and difficult to build a mental picture of. I collected four keys, and spent my time searching for the other two. It took longer than usual, and I recognized I wasn’t playing as well as I was earlier.

"We’re so close, I can feel it,” the cloud says. Gamers have been stuck before, have googled walkthroughs to find the next NPC to speak with, or to compensate for their incompetence. I wasn’t discouraged. “Anybody else would have completed it by now,” he says. This must mean the player frustration was planned, so it slyly allays their concerns. After several moments, the player may ask what happens if they jump off the floating plane. “Just fall into nothingness,” the companion encourages. “You know I don’t need you.”

So I jumped, and started at the beginning of the map, my key counter dropping from four to zero. My heart sank, and I collected five again, believing I was close, but kept returning to the same landmarks. “No more of the mundanity,” my companion chimed in. I jumped down three more times, partially thinking it added a new key or triggered an environmental change, but mostly just out of sheer frustration. This was nothing but self-destruction. The cloud wanted me to stop playing, like there was a monster at the end of the book.

Even after receiving unsettling messages from the cloud companion, I still thought, am I doing it slower than the developer intended?

I worried that my time could be spent elsewhere, and like I had failed, because Steam reviews indicated other players had accomplished it faster. I tapped my feet, and scratched my lips with my teeth. My resignation turned into anxiety. I was confronted with my own thoughts for 60 minutes—or was it 30? One hundred and twenty?

This map is not satisfied with optical trick—it also plays temporal illusions. It does this by taking a bet. If the player is not addled and easily secures the keys, then proceeds to the exit, they will miss the meat of the game. They see no reason why they should not be this player.

Most games either stumble into these “stuck” repetitions accidentally, or include locations that manufacture it for traps or vast locations. After stepping up the endless staircase in Super Mario 64, it’s obviously a loop when you walk back a few feet to the entrance. The "Lost Hills" area of the original Zelda feels large, but the map repeats when the player travels north, east, or south. When the cheap loop is identified, or resolved—go north four times—it loses its magic. The player perception is separated from Link’s in that the player now accepts or pretends in the fiction that the Lost Hills are infinitely confounding, whereas this is Link’s reality. 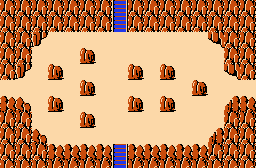 In OK/NORMAL, there is no severance. Once you’re invested, the feedback loop of knowing you’re close to the final key and then barely missing it can only be resolved by trudging on. The FOMO, the dread, the comparisons—all anxieties are magnified by player agency.

Until the sixth key is obtained, and the exit reached, the player may not even trust the game. After all, it has already broken the tone, the cloud’s character, and the UI is not reliably stable. The ending’s gentle catharsis comes much too late, and the player may retroactively try to imagine they received it on a quicker, more ideal playthrough, where the tormenting red mundanity was symmetrically paced. A 'normal' playthrough, if you will.

But getting lost is part of the design. Even getting more lost than you think you should is.

It’s not unfair, however. By remembering familiar tiles and locations on the map, the player may develop an internal map, but it is easy to get upset when they return to the same spots. If the first few levels offer some repetition, the rest is self-induced. There are many paths, and switching to a first-person angle reveals landmarks, like pyramids, in the distance. This is encouraged by the tiles and set-pieces, whose trippy textures seem to oscillate when zoomed by in closer proximity.

OK/NORMAL’s simple gameplay mechanics and help it boil down a latent question in other games: Am I playing this game normally? Or am I bad at it?

Given the (seemingly) personal themes of routine and frustration, especially regarding diet and drugs, it may also reflect this question in real life scenarios. How do we know if things are “normal,” after all? The jarring dynamism, the discouragement, and the resulting headspace is embodied in the red level. Few games capture an abject state of mind as well as OK/NORMAL does.