"There was nothing stopping us from writing this code four years ago, other than that nobody knew how to do it," says Brandon Laatsch, one of the developers behind Stress Level Zero's VR hit Boneworks.
Phill Cameron
Blogger
March 06, 2020

After an early 2017 visit to Seattle, Brandon Laatsch and Alex Knoll were stuck at the airport for nearly seven hours. They had been up in the Pacific Northwest to see an early version of Valve's new Index virtual reality controllers.

They were excited. "[Valve] showed us the Index long before anyone else," said Knoll, who was still working on Stress Level Zero's other project, Duck Season, at the time. "We immediately got the idea into our head of how this is going to change how we interact in VR."

That experience gave them the idea of "the incredible physics experience" they wanted to create. Laatsch told Gamasutra over video chat, "We let ourselves run wild creatively. What would these controllers be for? It moved away from being controllers in your hands to capturing the presence of hands themselves. Let's make something that centers around your physical agency."

Laatsch started working on this new concept as soon as he got back to Los Angeles. It launched in December of last year as Boneworks and has become a breakout VR hit on PC and a standard-bearer for interactivity in VR. 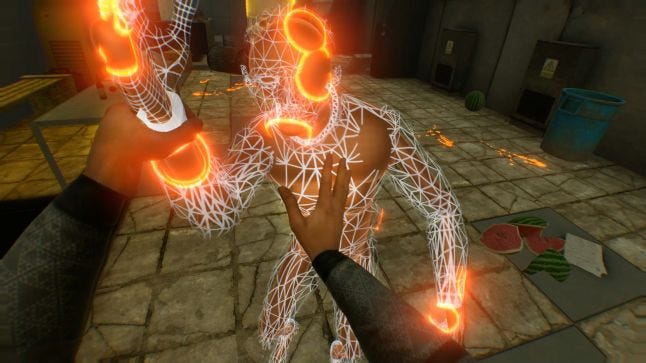 Boneworks is an experimental, sandbox-style VR adventure with an extremely high level of interactivity. Laatsch describes the game's concept as "full body presence, maneuverability throughout the world." Players can move, pick up, and throw any items they would be able to in real life in order to solve puzzles and defeat enemies. Objects have weight and can be manipulated in ways not possible in most other VR games. "Creatively this felt like the start of VR generation 2," Knoll said. "...It went from seeing everything to touching everything."

Laatsch and Knoll believed that VR design was lacking elements of non-VR game design. Teleportation, the lack of an ability to jump or crouch, and the lack of full-body presence (our bodies are more than just floating hands and heads) limit the player's perspective.

"VR games weren't attempting to use those in their suite of tools," Laatsch said. Stress Level Zero wanted to restore those elements in Boneworks and use them to encourage players to explore and interact with the environment in whatever way the players wanted.

Once they knew what they wanted the Boneworks concept to be, the team searched for a narrative structure that would help them direct their focus. They chose to set the game in a virtual operating system so they could move players into open rooms with combat encounters and puzzles.

Puzzles range from destroying boxes in order to reveal a crowbar that's blocking a door, to using a hook to weigh down a bridge you need to walk across. All the puzzles are fairly simple and they give players the option to approach from multiple heights, angles, and items depending on the level.

"I wanted to just improvise most puzzles," he said. "I had very few that I planned out in advance. I would essentially have the place where the player starts, the place where he needs to get to, and all these pieces and I would just start putting things together."

Knoll and Laatsch knew players would try to manipulate and break the physics engine whenever possible to bypass puzzles, which is common for many games trying to do what Boneworks does. "Pre-launch, a lot of players assumed that they would be able to exploit the flaws in the physics system," Knoll said. "And post-launch, it seems as though they've found that the physics is working well enough and is robust enough that there aren't really any exploits they can accomplish with bugginess of the physics."

The two designers believe the lack of bugginess is due to their commitment to "classic game mechanics." Their commitment to the concept of full-body maneuverability means they couldn't take some game design shortcuts that save time.

"We were able to do it by sticking with a pure simulation where there isn't something introducing an infinite force. The way jumping works is that your feet physically thrust down to propel yourself up," Laatsch said. "It's not sudden like you just get a magical force pushing you up. Something went down in order to create this equal opposite reaction and the decision to stick with that made it our system robust against the normal sort of physics exploits. Just by sticking to the principles of classical mechanics."

So when your character goes to jump in Boneworks, their legs actually bend as they prepare to leave the ground. Like all objects in the game, the player has an actual weight (82 kilograms) which helps ground the design. The jumps, and amount of force the player can apply to objects, is rooted in that weight. "It takes more code and more time to implement," Laatsch said. "But the reward of implementing it that way and sticking with that format made everything sort of inherently compatible with each other."

Despite a lack of exploits available to players, they've still created all sorts of ways to bypass puzzles that Knoll created. One player even created a pogo stick by combining a metal stick with a cannonball to better maneuver around a level. Solutions like that, which Laatsch and Knoll had no way of predicting, is something the development team wanted. Players can't use exploits to help them get through puzzles, they wanted the physics engine to give a level of freedom that feels like an exploit even when it isn't. 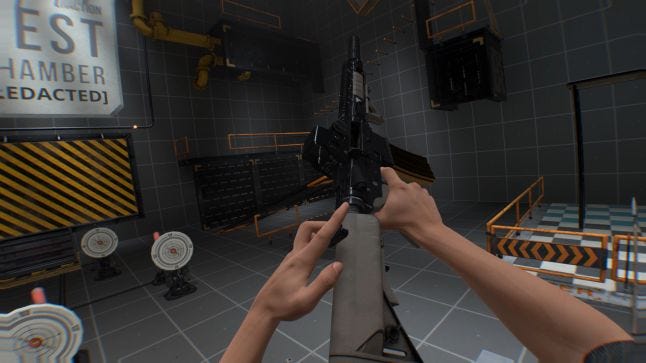 For many challenges, if a player can think of a solution it'll probably work. They can climb over fences, use a crowbar as a Swiss army knife, and all sorts of unconventional approaches. "If you feel like you're breaking the puzzles in order to solve them, you're doing it right," Knoll said. This level of freedom for players does come with its own set of challenges, particularly that puzzles can't be too complicated or intricate. Making too much of a specific task would mean players might be limited to how they can progress.

"A lot of the design over the course of the game for me was very much like a roller coaster," Knoll said before bringing up the level "Runoff" as a specific example. "Almost all the puzzles involved go upwards and all of the combat generally involves going downwards. That sort of exemplifies the feeling that I wanted to get across the entire game."

Laatsch brought up a comparison to Breath of the Wild, that players can basically fast travel by using Link's glider once they climb to a high enough peak. "The rewards for the puzzles is sometimes getting up to a higher altitude," Laatsch said. "And then from that vantage point you're going to be able to physically progress faster by going downhill."

On the surface, Boneworks is a straightforward first-person shooter with a deep level of environmental interactions for its puzzles. What makes it special is how unprecedented that level of interaction really is. It's something that the two didn't think they could make without the experience of their previous games and the visit to Valve.

It took iterating off their other games for years. The release of non-VR games No Brakes Games' Human Fall Flat and Spiderling Studios' Besiege led them to believe that the market might be ready for a game with a physics engine with the depth they envisioned.

"I don't think anybody could have made this game in 2016," Laatsch said. "The three years of iterations, four or five years of developing the in VR, [and] thinking in VR before it all came together gave us the necessary experience. There was nothing stopping us from writing this code four years ago, other than that nobody knew how to do it."