How an Architect May Be Useful to Your Dev Team

This blog post outlines the parallels between in the field of architecture and game development, and why an architect can be a great addition to the development team.
Game Developer
Staff
April 03, 2017


"Have you ever been to Florence? The Il Duomo Di Firenze (Florence Cathedral) is absolutely beautiful."

As a former architecture student turned game designer, such a response is both motivational and inspirational. It reminds me that the two fields, which are both near and dear to my heart, are not that much different from one another. Deanna Van Buren wrote a Gamasutra article outlining how architectural knowledge proved useful during the development process of The Witness. When people ask about my career change, I tell them that there are many parallels between the two fields. As an architect, I was taught to think in 3D; architects are taught to visualize all aspects of their designs. They have a thorough knowledge base of architectural and cultural history and iconography (a branch of art history, that studies the identification, description, and the interpretation of the content of images); knowledge which can be used to develop more convincing virtual worlds.

Contrary to video game development, architecture is one of the oldest industries in the world. When you look at how architectural structures have changed over time, the differences are not that significant. The base materials have stayed more or less the same, and the main principles upon which the study is based have remained unchanged since first outlined in 30 – 15 BC by Vitruvius. On the other hand, game development is one of the fastest evolving industries of the modern day. This young industry still has a long ways to go, and various aspects can be vastly improved  with the help of one of humankind’s oldest industries – architecture.

Nowadays, we strive to be new and innovative with startups at every corner. In an effort to create a holistic game identity, video game developers often commit to one style, period or genre in their games. However, this is not how environments exist in reality. The environments we inhabit today are layered; they have been painted by history and molded by the stories behind them. These are subtleties that the games of today lack, which could be introduced into our virtual environments with some architectural expertise.

A scale model of the Cathedral Mosque of Cordoba created by University of Waterloo architecture students.

In order to design modern-day buildings we need to have a thorough knowledge base of how humanity got to where it is today. Any architectural education consists of a healthy amount of history courses which range in subject matter from iconography to the history of art and religion. Architects are tasked with recreating structures in miniature in order to learn about the structural details that went into developing and constructing these iconic buildings. They learn how to find the information they need, as often what they seek is not something that is readily available on the internet. Often, they are required to dig through scholarly journals, archives and/or refer to artworks for historical information (depending on how far back they are required to go). Every architectural project starts with an extensive amount of research regarding everything from geological information about the area where the structure is to be built, to the history of the surrounding buildings, and the cultural influences that may affect the structure.

Concept art from Assassin’s Creed for the character of Cesare Borgia, made by Vincent Gaigneux. Image © Ubisoft Montreal [Image source]

When Ubisoft Montreal was developing Assassin’s Creed II, the art director Vincent Gaigneux was in charge of designing Ezio Auditore da Firenze (the main character). He enlisted the help of Maria Elisa Navarro, who at the time was working on her PhD in Architectural History and Theory at the University of McGill. At first, his intention was only to question her on how he could familiarize himself with the look and feel of the Italian Renaissance, so that he could best design the costumes, weapons, etc. However, once Navarro told him that he had to access archives to study documents and original paintings from the time-period, Gaigneux soon realized that the task was very foreign to him. With that, Navarro was brought onto the project for the next two years.

Ubisoft needed to familiarize themselves with the time-period between 1476 and 1503, to design the characters, 3D models and gameplay. Navarro’s job consisted of preparing master classes for the team, in order to teach them of the Italian Renaissance, the House of Medici and more. She also prepared documents from the archives in response to specific design needs. Beyond architecture, Navarro’s influence also spread to the wardrobe of the characters as she had discovered that the clothing differed by region. Through studying paintings from the time-period, she found that they depicted distinctive differences between the fashion of Florence, and that of Venice. This knowledge was then translated into the game world with the help of the artists and designers on the team.

Every day I see games that aim to create hyper-realistic environments, but many fail in recreating the intricate details that a seasoned eye would notice. Video games depict incredible atmospheres but often these depictions paint an idealized picture, without considering history. For example, the game may be set in a futuristic city filled with shiny and gleaming structures but that is not how our cities are built. Our cities consist of layers of history where even the newest and most modern cities will have both new and old structures side by side.

Other times, artists will not take the materials of the structures into account and will only worry about what they deem aesthetically pleasing to the eye. Does it matter that your model has stone columns on wooden floors that would never actually be able to stand in the real world? Does it matter that your Italian Renaissance building has a wrought iron balcony that does not correspond to the era that the game is set in? Depends on what you, the developer, consider important for your game. 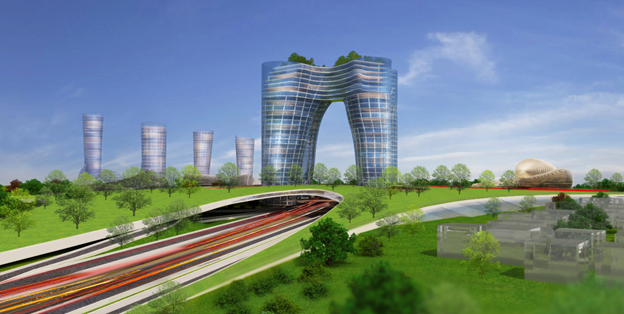 Unlike architecture, game development offers me more room for creativity, where my designs need not be bound by the physical world. I can put the needs of my players first and design based on what is best for them. While working as an architectural intern at Yashar Architects in Israel, I was tasked with building the 3D model for a conceptual design competition that the firm entered. The entire team was so excited at the sight of a conceptual competition. The entire firm soon became involved, and the designs that we created were otherworldly. The excitement on my coworkers’ faces could not be contained – they were designing unique buildings without worrying about client needs or how much money they would be making for the developers. 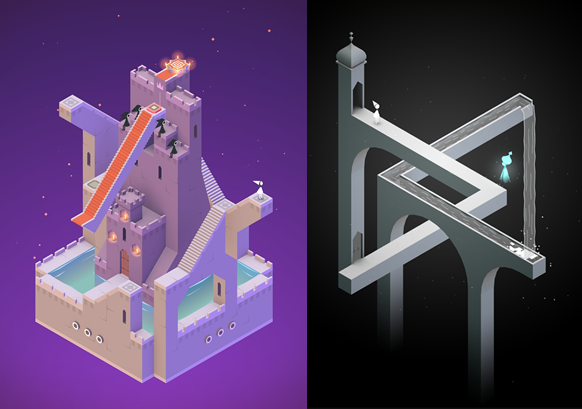 Monument Valley questions what we consider architectural bounds and allows players to manipulate the architecture in its fantastical game world. [Image source]

Trained to think 3-Dimensionally, architects would be able to create breathtaking, incredible structures when given the opportunity. Trained to work in proper scale and add detail as necessary, architects would be able to bring more depth to already unconceivable game worlds like in Monument Valley. When I first played this game, I was mesmerized at how I was able to manipulate the architecture to traverse through the levels. Heavily influenced by M.C. Escher, this seemingly simple, yet very elaborate game is able to immerse players into its game world through the consistency in the details (using the palette and structures). Through an outside eye, it may seem silly to spend a great amount of man-hours on seemingly miniscule things like the furnishings, door handles, window openings, etc., but all of this greatly adds to the environment while still aligning to the chosen art-style. Any architect would be excited at the opportunity to bend architectural physics in order to create a fantastical game world.

What is Your Story?

Ask any architectural student to explain why they chose to design something a certain way and they will provide an elaborate reason or backstory. Architects are taught that they must be able to justify every single design decision that they make. The reason may be related to the geological state of the site where the structure is to be built, geographical location, culture of the area, or something else entirely; but there must be a reason beyond just the superficial aspect. Architects sometimes create their own architectural stories to go with their designs. The same would benefit the game development process – there should be reasons behind design decisions and stories behind the games we make. 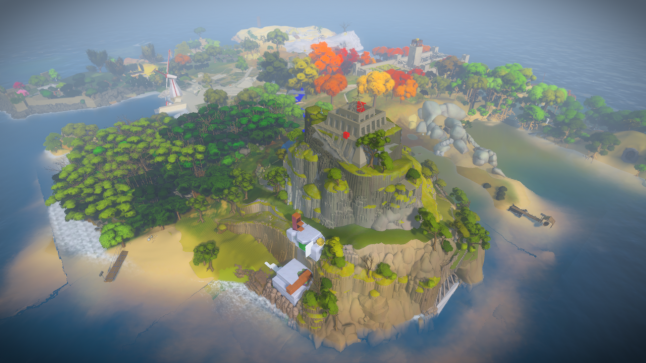 Developers of The Witness hired architects to help them create the island in the game. [Image Source]

As previously mentioned, architects were hired to help create the island in The Witness. In the real world, architecture and landscape are based on the historical, physical and institutional constraints of the world we live in. What is the topography of the land? What materials are available to us? What climate are we in? What are the zoning laws of the area? Those are the types of questions that designers should consider when creating a game as they would bring more authenticity to the virtual world. During the making of The Witness, Deanna Van Buren’s first question for the developers was “where is north on the Island?” The significance of such constraints is immense.

Just like architects are bound by constraints of reality, designers should create boundaries for themselves when designing a game. It is important to establish a frame for the world that you are trying to create. Developing a narrative would help define these constraints and would allow for more realism. While the game does not have to be graphically realistic, the existence of constraints such as passage of time, directional sun, an established climate, etc. help the players relate more to the game world and thereby feel more immersed.

However, just as the developers would have to adapt to the architectural constraints, architects would also have to adapt to the gameplay constraints that they are not used to. After all, the buildings of the Italian Renaissance were not meant to be viewed from above, nor were they designed to be climbed on. Nevertheless, the architects and designers need to configure the game world so that the players would still feel as if they are in the appropriate time-period, but the gameplay would not suffer.

Regardless of whether your game strives to create a hyper realistic environment, or a fantastical world, you can enlist the help of architects for their thorough knowledge base of architectural history, culture and iconography to help develop these virtual worlds. We can lure them with the endless architectural possibilities that virtual environments can offer, where they would be able to explore architectural and environmental limits. We can take pointers from this well-established industry and create stories behind our designs in order to bring a more authentic feel into our game worlds. As game designers, we can learn a lot from the architectural industry, and where applicable, employ architects to supplement our design needs.