Disaster Report! and the Art of the Immediate Narrative

How the PS2 game Disaster Report! uses our innate knowledge of the real world to its advantage - something Hitchcock successfully did many years ago.
John Brethauer
Blogger
September 06, 2016

This a repost from odplot's blog here. However, this piece is entirely of my own design & thoughts.

Since I’ve been working on odplot’s first game so much recently, I’ve been neglecting giving myself time to play video games, when I should be playing as many as possible to improve my design skills. So I’m going to make a pointed effort towards playing them and documenting what is great about them.

Specifically, I’m going to be playing older adventure games and analyzing them for what made them great.

And this first one is really great: Distaster Report! (SOS: The Final Escape in EU, and Zettai Zetsumei Toshi in Japan) 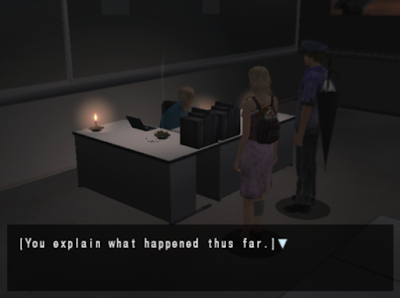 The idea behind this game is that you are in a city, and that city is collapsing, and you have to escape the city. It’s simple, and immediate, and effective, and speaks to one of gaming’s greatest strengths: the heat of the moment. Like film, games tend to be well suited to simple and immediate plots. Mostly because we as players need something to do. If we don’t have a goal, we become lost, and in this game the goals are always quite clear :

This echoes something Hitchcock had once said: he made movies only if the dangers were immediate and present and sensible to the audience, because that is the only way that dangers would give them an instant visceral reaction. Hiding the danger behind layers of rules and monster abilities and such ("gamification") obfuscates that sense of danger so that only a player who is intimately familiar with its systems can feel it. In a game like this, anyone can pick it up and know what to do, and feel its dangers.

This is also why physics puzzlers are so popular. 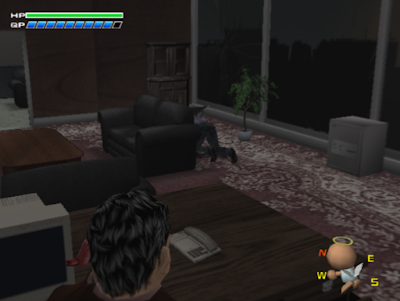 Mechanics that service the story

Another thing that is great about this game is that each ability you can perform, every system in place, is in complete service to the story and experience. It is not, for instance, a Silent Hill 2-like controlled shooter game with Silent Hill replaced by a collapsing city. It is completely its own thing.

By holding R1 to “brace” yourself, you do not fall when aftershocks hit, which reduces your time on the ground, which reduces your chance of being hit by a falling building. If you fall off ledges or just barely make jumps, your avatar clings onto the edge and the camera swoops dramatically upward, showing the player the great height at which he is at risk of falling.

There are many games today that involve avatars clinging onto edges from great heights, but none do it like Disaster Report! does it. They don’t really have the sense of height. They understand only its form, not its function.

But what is most important about these things is that these particular features work only for this game. They were included to give the player the sense of fleeing a sinking city, and as such their incarnations can never just be ripped from this game and put into another. They only work in a “fleeing a sinking city” game.

The mechanics also play on knowledge that we, as humans, all generally posses. They are clear, logical mechanics that one would sensibly actually do if trying to escape a sinking city. We all understand that if you "brace" yourself, you will not fall during an aftershock. In this way, they are very effective for getting player response. 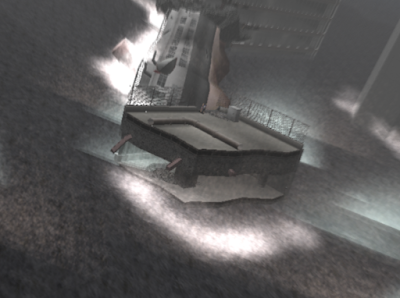 Where Uncharted gets it wrong

I was thinking about the Uncharted games a lot while I was playing this. They, too, include climbing stuff and trying to not die while jumping around collapsing structures in grand fashions. And while the Uncharted games clearly have a much larger budget than this game had, it really felt more exhilarating to try and not be crushed in this game. In the Uncharted games, I don’t feel like structures will “fall” onto you. It sort of feels like a structure animates that it falls, and if it detects the player is in the path of it falling it gives you a game over screen. There is a layer of budget that glosses over the whole thing, and as a result the tactile feel of something massive falling somehow goes away.

Another missed opportunity in the Uncharted games is the sense of direction we humans posses. Because you are able to essentially hold a button and press forward and reach the end, danger evaporates. There is no option for where to go, and no thinking about where to go because the only way is clearly foward. Disaster Report!, on the other hand, again uses our innate human abilities to its design advantage. 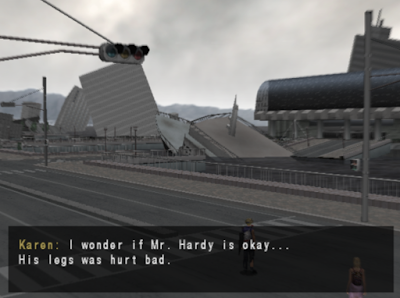 The Uncharted games remove all sense of discovery that one should feel when playing a game about treasure hunting because it forces you along this one path that you take and there is never any question that you should take it.

In Disaster Report!, instead of the player being pulled along the one path, you have to use your own sense of space and intuition for how to progress. As humans, we like to draw conclusions and make inferences. There may be three different streets to go down, but if we can tell that two of them are blocked by rubble a short ways up, we'll go down the third instead of wasting our time trying the other two. And the difference between the two games is that Disaster Report! uses that as a gameplay feature: something that is already built into every one of us.

Uncharted feels like it is designed to be visually appealing first, with cues to tell the player where to go added second, when it should have been designed so that the player can get lost, or at least waste time going down wrong paths, but can use his intuition to stop that from happening. Disaster Report! was designed firstly to have the player figure out his path, with the visuals as an afterthought.

One is better to look at. One is more fun to play. 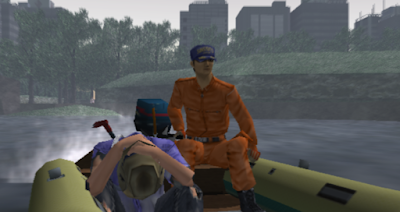 The only real gripe I have with Disaster Report! is its bizarre need to have alternate paths and endings. There are at least two points in the game where you take one path over another which, as far as I can tell, leads to chunks of content being missed. This game's budget was already low, so I think the money would have been better spent on improving the sound effects or something. And the branching paths don't do anything for the game on a narrative or design level. The alternate endings are the same way. They are just sort of there. But that's a discussion for another day.