Designing for Deep Gameplay in Anew: The Distant Light

Anew: The Distant Light is a Metroid-style open-world game currently in development and nearing feature-complete.  (We also have a Kickstarter underway.)  This article discusses the practical application of some design theory for deep gameplay with examples in Anew.

What does it mean for a game to have deep design or deep play?  This is a personal question with different answers for different people.  To me, it means that a game has a large possibility space, dense with interesting player choices.  It doesn’t require an endless game world (though the world of Anew is quite large) or hundreds of redundant items.  It does, however, require thoughtful planning by the designer.

Deep design can be approached from the top down.  The developer can create multiple roads (literally) to get from A to B, provide different viable methods to defeat an enemy, design multiple solutions to a puzzle, or lay diverse clues about the truth behind a mystery.

It’s not just about having options though.  Each way should have varied advantages and consequences so that the player’s approach, conscious or accidental, has meaning.  For some players this will involve an analysis to find the path of least resistance.  Curious players will want to explore multiple paths.  For the most skilled players the path chosen may just be an expression of their style.

A bottom up approach to deep design can also grow a game’s possibility space and create meaningful player choices.  This is all about building interactions--how the functional pieces of the game (characters, items, and environment) affect each other.  The results of many of these interactions should be designed, but with enough interesting game systems emergent play will also develop.

Emergent player options can be overpowered.  If they're fun, and the advantage is only circumstantial or contextually limited (or can be made so), often the right design decision is to keep them.  Though, such such things shouldn't be allowed to entirely overshadow other potentially interesting ways of playing.

But, why design for gameplay depth?  The short answer is that deep gameplay creates positive emotions that feel good.  Here are a few examples:

So, designing for deep gameplay seems like a worthwhile pursuit.  Revealing that gameplay depth at a consumable pace is also important.  A player shouldn’t be overwhelmed with decisions when they start.  Early options should be apparent, satisfying, and have intuitive outcomes.  The best games entice new ways to play and allow for accidental discoveries without too much tutorial.  If a game is fun and deep, but the possibility space takes a while to explore, it helps keep players engaged and improves the replay value of the game.

These abstract design concepts are touchstones for many aspects of gameplay in Anew, but for equipment in particular.  Let’s take a look at our bottom up design concepts applied to a couple of our player weapons.

We want to create meaningful choices and deep interactions between game systems.  So, we could say that each weapon must have at least two unique combat advantages and two utility advantages, such as mobility or environment access.  Through this design approach, even a standard issue SpringSteel Shotgun can yield deep gameplay.

Here are some uses for our Shotgun:

As you can see, there are many diverse and circumstantial reasons to equip and use the shotgun for offense, defence, and movement.  The different uses are also varied on the amount of player skill required for success.

In Anew, all weapons are designed to have unique roles.  This helps make decisions meaningful while still growing the possibility space of gameplay.

Let’s look at a less conventional weapon, the Buzzsaw.  This tool is powerful, but it spins up slowly, aims slowly, and slows your movement speed (especially once the sawblade is dug in).

If you’ve ever held a heavy power tool or felt the unwieldy gyroscopic effect of a spinning bike wheel, those are some sensations we wanted to convey in game with the Buzzsaw.  It’s not easy to make that come through the screen and controller, but we've made some good headway.

Some uses for the Buzzsaw:

The Buzzsaw has some obvious and easy uses, some that you have to figure out, and some that require skill.  When to buzzsaw a durable enemy with other threats present is a surprisingly deep tactical choice.

Back to our game design touchstones.  What about maintaining interesting decisions and discoveries as the game progresses?  We know that it’s good to expose the possibility space gradually.  This helps to keep things fresh and also allow a more gentle learning curve.  So, we put weapon upgrades behind a few locked doors.

In Anew you will have to find ways to bring different parts of your homeship online, one being your workbench.  There, you can upgrade any of your weapons along a unique customization path.  Each upgrade requires a rare component found in the game world. Every upgrade is a choice between two mutually-exclusive options and the decisions are permanent (as far as you know).

For the Buzzsaw, the upgrade item is Focused Plasma.  There are a small number of these scattered throughout the game world, hidden or defended.  With one bit of Focused Plasma and some Materiel (a resource acquired from most things in the game world), you can apply your upgrade. 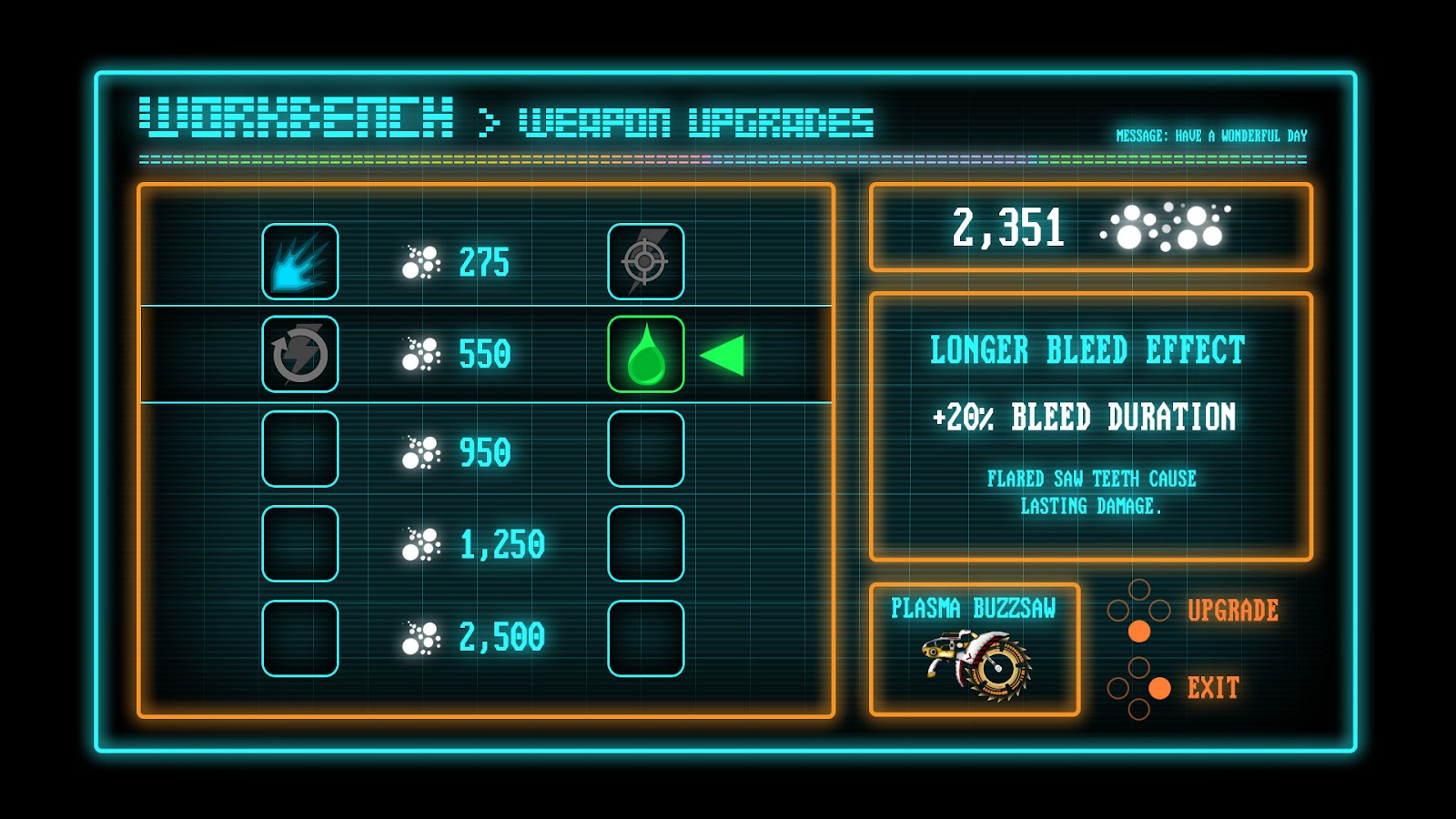 Upgrade options for the Plasma Buzzsaw:

These choices are designed to be meaningful and provoke some internal debate.  The player will want to select improvements that fit their play style.  Some of the upgrades exist twice and those benefits will stack, creating further tension between other enticing choices (especially those that offer new mechanics).

In Anew, the player doesn’t need to nitpick over stats--every weapon is substantially different and each upgrade has a meaningful change that you can feel.  So the player only has to consider the concept of each upgrade and not pull out a calculator to make a decision.

We’ve seen similar upgrade systems in other games and found them to be deep, despite their relative simplicity.  We hope that you like these ideas for deep gameplay and we think they’ll help make a fun, highly replayable game.  Please share your thoughts in the comments below.

If you liked this, you may want to read my other Gamasutra article on creating fluid gunplay, which is somewhat more oriented toward art and programming.

Steve Copeland and Jeff Spoonhower have worked on games in franchises such as Bioshock, Borderlands, Star Wars, Uncharted, Lord of the Rings, Command & Conquer, Saints Row, and others.  They are co-founders of Resonator and comprise the two-person team developing Anew: The Distant Light, which currently has a Kickstarter underway.