Burning The Mother Down: The Failings Behind Diablo 3's Inferno Mode

There has been a lot of criticism behind Diablo 3's endgame. Today's post examines the problems that rear their head in the final difficulty setting.
Josh Bycer
Blogger
July 20, 2012

Over the course of the last two weeks, I've easily spent 20 hours going through Diablo 3's hardest difficulty setting: Inferno mode. As it currently stands I'm on act 3 stuck due to inadequate gear. Over those same two weeks, I've had a chance to examine Inferno mode and came to a realization: Blizzard screwed up.

Before we begin, this piece references my earlier thoughts on Diablo 3's design and difficulty and if you haven't read them yet, it will be a good idea so that everyone is on the same page:

A look at Masochistic Difficulty

And if it's not already made clear, this post and discussions can have spoilers in it.

The Only Way Out:

In my Diablo 3 analysis, I touched on the problems with the itemization that plagued the game from Normal to Hell Difficulty. Because characters only received direct bonuses from their primary stat and vitality, it limited the gear that each character could wear.

In the earlier difficulties, the level of the gear available goes up with each act, which makes the player start to see gear that is relatively better then ones before it. But, because of the importance of the stats, lower level gear could be better for specific characters if they have the right affixes of bonuses. That however gets thrown out the window once the player reaches inferno.

At the level cap (which is currently at 60), players will of course not receive any more levels, skills or runes and must rely on equipment to continue improving their character. But while the player is done improving, the level of gear available continues up for 4 more levels: 60-63. The difference in base stats between level 61 items to those below it is huge. This is where weapons' Damage Per Second (or DPS) begins to reach into the high hundreds and armor that has the affix that gives resistance to all types of damage becomes easier to find. 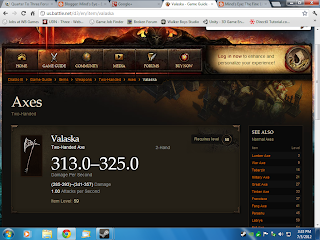 Before, lower level gear could still be viable, but not anymore. A rare level 55 item will not be anywhere as good as a level 62 or up magic item. And the jump between level 60 to level 63 items is also a big deal, as level 63 weapons can have their DPS above one thousand. While the player can find level 60 to level 63 equipment, there is only one option to survive inferno mode: level 63 or bust.

This mechanic presents several major design flaws with Diablo 3. First is that it makes the already limited choices for finding good gear, even more restrictive. Because the player can't improve their character any other way, they are at the mercy of the auction house and random number generator to have any hope of getting through inferno.

The even bigger problem is that the designers have destroyed the power curve behind item growth, which was one of the major attractions behind Diablo 2. In Diablo 2, loot was always scaling up, and the equipment you would find in one act, would be weaker than the ones in the next act. That meant that as a player, you would get more powerful the further you played.

But in Diablo 3, once someone reaches inferno mode, the loot available stops at level 63 and can be found in act one. The only difference between the acts is the chance that a higher level item will drop. Meaning that someone could easily find gear in Act 1, that would be used all the way into act 4.

Not only does this ruin the power curve, but it also affects the auction house as players are only going to buy level 63 items due to their innately higher base stats. What Blizzard should have done was tighten up the level curve to make only level 60 and up items drop in inferno and then add more item levels between each act. For example: act 1 would still have level 60-63 items available, but act 2 would have 60-64, act 3 have 60-65 and act 4 would carry 60-66.

This change would give players a higher chance of finding good gear and at the same time, motivate them to continue playing through the acts to improve their character. As it stands, you could just keep replaying Act 1 and eventually get the best loot in the game, which the game is designed around at this point. 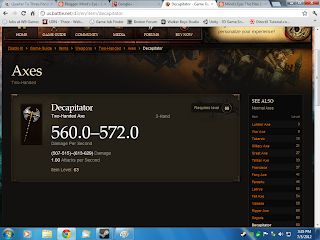 The Enemy Affixes of Doom:

The next problem has to do with fighting special and elite enemies. In the earlier difficulty levels, players would have dealt with the various modifiers attached to special enemies. But with enemies that are naturally harder in inferno, which I talked about in my masochism difficulty post. And when you take those mechanics and add the higher enemy stats combined with the combination of modifiers pushes the game's difficulty into cheap territory.

Several modifiers (Waller, vortex, and jailer) cannot be avoided by player skill. Once the enemy uses them, the player is going to be affected. The only option the player has is if they have a skill not on cool down that allows them to recover. But when an enemy group is using the same modifier, chances are the player will be hit by it again before their escape skill has finished recharging.

All the player can do then is just wait and hope that the enemy doesn't finish them off during the several seconds of immobility. Things become worse when the modifiers around enemy shields appear. When an enemy is shielded they are immune to all damage for several seconds. After the shield goes down, players only have a few seconds to do damage before it comes back up.

When you have fast moving enemies who can do a quarter or more of the player's health per hit, giving them immunity to damage is effectively an "I-Win Button". Once again this gets back to removing the player's skill from the equation. It doesn't matter how skilled the player is, or what their character's stats are, when the enemy can become invincible for several seconds constantly during a battle.

These modifiers that remove player skill and control are bad enough, but the next detail just seals the deal on the problems with difficulty.

Once the player reaches inferno: special, elite and boss enemies will have a new ability. If the player spends more than 5 minutes fighting one set of enemies, they will become enraged. What that means is that either the enemy's damage output would go through the roof, or by being near the enemy the player will take constant damage until they die. For bosses, it meant that the player will be killed without any way to avoid it.

The problem with this mechanic is that it further destroys skill customization which was already at an all time low. Going into inferno, a lot of the skills and runes available lose their utility thanks to the increased attributes of the enemies. But with the enrage timer, it makes characters built towards defense obsolete, as even if they can take the damage, they'll be killed once the timer goes off. This mechanic once again limits the skills and runes available and forces the player to focus on offense. Having the timer for boss fights was an even more confusing decision. As not only does it limit choice, but it punishes players who team up with their friends. As each new person in the group, increases the health pool of the boss. If your friends aren't strong enough, they can make the boss impossible to kill before the timer goes off by no fault of their own.

In a recent forum post, Diablo 3's community manager said that Diablo 3 doesn't have a proper end game and that the itemization is not enough at this point. Without sounding too smug all I can say is "duh." It took me less than 2 weeks to see the problems with inferno mode and I'm starting to question the design decisions at Blizzard for them not to see these issues after working on the game for years.

The part that has me really worried is that maybe the designers aren't as foolish as I think they are, and instead planned this as an excuse to sell more expansions. I really hope that I'm wrong on this point as there are a lot of good things in Diablo 3. But the further I played the more problems and quite frankly, stupid mistakes I see with the design.

Diablo 3 could have easily been at the top of my best games of 2012 list, but as it stands the numerous problems are dragging it further and further down. It's baffling, like watching a high rank Tennis player, lose in the early rounds of a tournament against a lower ranked player. You know they have the skills, but for some reason they just can't get it together.