The UK's Office of Fair Trade recently proposed 8 principles for in-game purchases. Monetization design consultant Levy looks at what following these principles means for game developers and how it will have a net positive impact on free-to-play games.
Ethan Levy
Blogger
September 27, 2013

On Thursday, the UK’s Office of Fair Trade released its Children’s Online Games report and consultation. The report outlines 8 principles for games targeted at children that contain in-game purchases. The “report outlines the main issues we identified through our investigation and our proposed remedy: to produce a set of industry-wide Principles to make clear the OFT’s views on businesses’ obligations under consumer protection law and what they should do to avoid being the subject of targeted enforcement action.”

No doubt inspired by stories like the 8 year old girl who spent $1,400 inside of Smurfs for iPad, the report is one I have heard concerns about when talking to clients over the past few months. I am no lawyer, and this post in no way should be taken as legal advice, but my personal interpretation is that these 8 principles are largely great for game developers.

If you operate a game in the UK that offers in-game purchases, I suggest you get acquainted with the principles and start updating your game accordingly. From my perspective, the definition of child (“the OFT considers that a child is likely to be considered a person under the age of 16”) is a bit broad and even though the report tries to target games more on The Smurfs’ Village end of the spectrum with guidelines like “inclusion of characters popular with or likely to appeal to children,” “cartoon-like graphics,” and “bright colours” I believe that by defining children at 16, more or less all games (regardless of platform) rated less than Mature (by ESRB standards) could fall under these provisions.

I believe that enforcing these 8 principles will be great for game developers. There is no reason to be concerned about these principles changing your game’s design or impacting your ability to make a profit. The overall effect of the principles will be to reduce or eliminate some of the more intentionally confusing user interface practices that tend to give this sector of our industry a bad name.

As a monetization design consultant, I spend the a lot of effort on user interface design. The principles laid out by the OFT largely demand implementing better user interfaces that make it clearer when the player is going to spend money. For the rest of the article I will focus on principles 4-7 where compliance is “likely to fall almost entirely to games operators” and how they would affect UI changes in a sample game. For the purposes of the article, I thought it apropos to use The Smurfs’ Village.

Principle 4 is where, as a layman, I see the most grey area that should be more clearly defined. “Consumers are not prompted while playing the game to pay for additional content or features. Any messages with a commercial intent are clearly identifiable and distinguishable from gameplay.” I do not know how a clear line is drawn between being in the app and playing the game - or, I know how I as an expert would draw the line but do not expect that my mother would be able to easily understand my definition by looking at a game. The report says that for purchase prompts “information appears in the form of an advertisement that is distinguishable and separate from gameplay.”

But the report gives more details that help clarify the issue. One is that language should clearly differentiate between using in-game resources and buying items with real money. For example, this screen is a proper example of using an in-game resource: 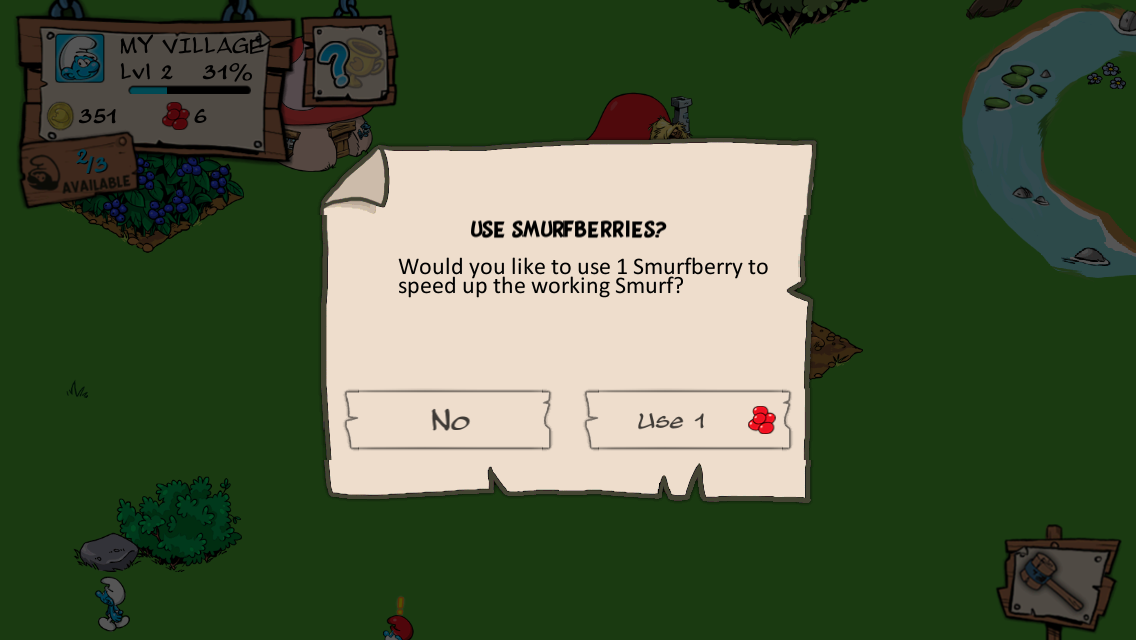 But this screen and all communicating a similar message should clearly use the word buy and generally make it clear you are headed towards a real-money purchase. 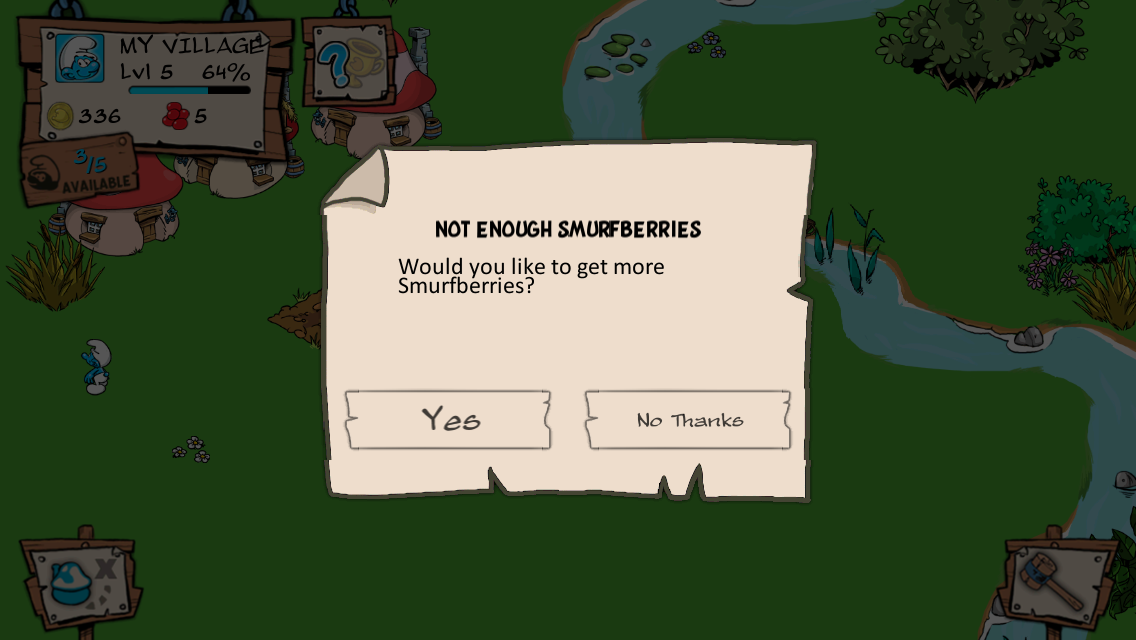 A conservative interpretation of the principles would have the string revised to “Would you like to buy more Smurfberries? Smurfberries must be purchased with real money.”

Principle 4 further states that “if they try to do something for which they do not have enough in-game currency, both free to play and paid for options are presented with equal prominence.” This equal prominence requirement is the one likely to require the most widespread UI changes (and, in my opinion, simply enforce good UI design practices). It is mentioned in Principle 4 for prompted purchases as well as in Principle 5: “both paid-for and non-paid-for options are presented clearly and given equal prominence to consumers.”

If I look at this screen, shown after I have clicked a farming action in process: 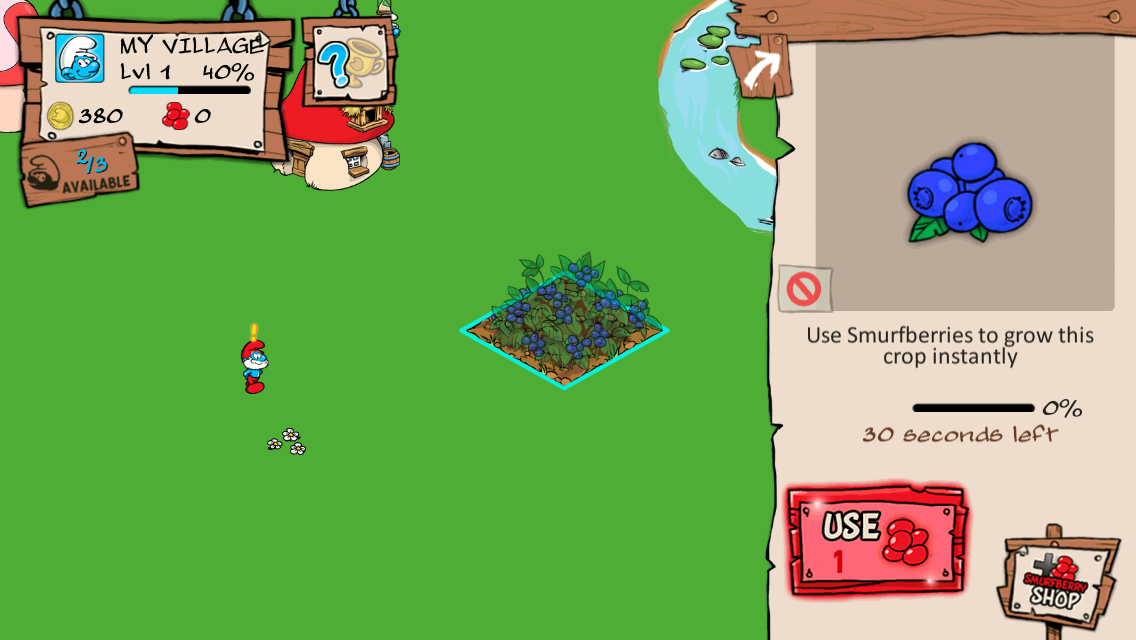 I interpret 3 actions the player can take. Use 1 Smurfberry, visit the shop and wait. If the player chooses to wait, he must click the small return arrow in the top left corner of the UI element. Judging by size, positioning and messaging the option to wait is clearly not given equal prominence.

This practice is widespread throughout our industry, and frankly very annoying as a player. I think that we will only benefit from removing this UI practice from our vocabulary, where the option to decline a purchase is obscured by only allowing it through the closing of the dialog box. A clear and equally prominent “I’ll wait X seconds” button where the shop button currently sits will only make this a better screen and, when proliferated throughout the app, a more playable game.

From my reading, Principles 6 & 7 deal primarily with using better copy. Clearer, more transparent, less exploitative. I could not easily find an example in The Smurfs’ Village that exemplifies crossing principle 6 which requires “A game provides information to consumers about premium content or features available for payment. That information is given in an objective, clear, accurate and non-exploitative way.”

This seems targeted at DragonVale style breeding games that include caring for creatures. The example the report gives is to say “Your seagull is hungry! Feed him sardines or ice cream to make him strong” instead of “Your seagull is hungry! Feed him ice cream or he will be unhappy.” The intent here is that when using a resource is tied to a purchase (when you run out of that resource) you must avoid using emotional appeals that prey on a child’s attachment to the cartoon character. This style of copy is clearly exploitive.

Principle 7 is again about clearer copywriting. In regards to in-game currency “when the consumer runs out of that in-game currency, there is no prompt or in-game encouragement or incitement to buy more. The game may nevertheless give information about what may be bought and how the payment mechanism operates.” The line here is that there is a clear difference between imploring the player to buy more currency “You have run out of cherries. BUY MORE NOW from the shop” and informing him of his ability to buy more currency.

Polishing off the tarnish

I applaud the OFT on the quality of the suggestions in their report. As a game designer, I feel that they have in no way restricted or diminished my ability to make an excellent game using the in-game purchase business model. There is no feature I have recommended in the past 12 months that I will not be recommending in the coming 12 as a result of this report. I see no way that following these principles restricts my creativity as a designer or earnings potential as a business.

What the OFT has done is set clear guidelines for those practices that are not only distasteful, but potentially exploitive and illegal. Following these principles will require many games to overhaul their copy and UI, and require game studios to enforce stricter requirements around the copy and UI used in relation to in-game purchases. Over time, the result will be to polish off some of the tarnish that has built up during the rise of free-to-play on social networks and mobile devices.

Free-to-play games will be better thanks to these principles.