Why failing your Kickstarter might be a good thing

Is it a sad story about failure, or just another tale about recognition and success? That depends on what you take from it.
Aiaz Marx
Blogger
June 14, 2019

This article is dedicated to all entrepreneurs, game developers, and just creative passionate people.

Is it a sad story about failure, or just another tale about recognition and success? That depends on what you take from it.

Okay, bear with me.

My name is Aiaz Marx. Originally from Russia, I moved to Spain about 4 years ago and I’ve lived here ever since. Now I'm 20.

Last year I finally graduated from high school, but because of the economic situation in my family, I couldn't go to college. A normal person would try to find a job and hope to enter the next year, right?

Well guess what? I was always far from normal. I decided to take the difficult path of becoming a successful game developer from nothing, in just one year! I know what you think. Don't be judgy.

So, I convinced my parents to give me this time and I started my journey.

First of all, I had to improve my pixel art, coding and storytelling skills.

But the hardest thing for me to learn was to share my work and take critique for my games... and there was a lot of it. Believe me, being a solo dev in the Russian internet community is like surviving a zombie apocalypse.

So after months of trial and error, in December, I finally found a good idea for a game and escaped from my soviet bunker to Twitter and Tumblr.

It was a truly pleasant experience, and my small community was gradually growing. Soon I managed to find an editor and release my first demo on itch.io.

This can't be true, right?! I immediately checked my YouTube feed and indeed... there it was - a full 50 minute long play of my humble 2D horror story-driven game!

My heart was pounding, my hands shaking.

I posted this on my Tumblr and in just a few minutes I somehow got a response from Jack himself! 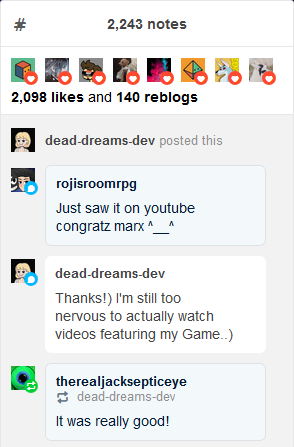 Needless to say, it was HUGE for such a tiny solo dev like me.

A celebrity playing your game. Check!

Now it's time for Kickstarter!

I had it all planned out. My Tumblr and Twitter communities were growing fast. If I release a new demo, even cooler than the old one, and translate it into three languages, I would easily reach my $3,000 goal!

On June 1st I launched my game ironically called "Dead Dreams"... and it flopped.

Remember all these people who didn't believe in your success? They were right.

The next two days were some of the worst days of my life. I realized that my Kickstarter page looked very poor, as well as the game trailer.

I suddenly felt a crushing weight, as if a giant rock was on my chest. I couldn't eat. I was in constant pain and suffering from anxiety attacks. I no longer believed in my project or my abilities to make good games. I was disappointed in myself.  Nonetheless, I spent this time trying to fix my errors. I put too much work into this project and couldn't just let it die.

My worst fear was that this feeling could last forever...

Days like these, you'll need support, but please don't put your frustrations into public view. People may feel pity for you, but trust me, it will make things even worse and can irreparably damage your image. Instead, think about taking a long walk.

On the third day, I accepted my failure and started to realize that it actually wasn't one! And I was finally feeling better.

First of all, the fact that your Kickstarter has failed doesn't mean your project is bad.

Take a fine look at their website and you're going to find a handful of great games which couldn't reach their goal. You're not alone!

A successful project’s average goal is $5,000 and the truth is a lot of them were funded by the financial support of the creator’s family and friends. In many cases, the creators themselves will pledge a significant amount of money to save their campaign.

So if you're like me and can only count on your community - chances of failing are much higher.

The dream of becoming a game developer has changed me for the better, regardless of the results of my Kickstarter campaign.

Through this experience I learned to:

Don't forget, your followers are here to stay! And now you have a bunch of friendly contacts who could help you out in the future.

But most importantly this "failure" made you stronger. You reached the bottom but managed to heal your wounds, learn from your mistakes and get back on track! Be proud of it! Don't depreciate this experience!

So now you're back on track, but really it's just the beginning of your journey!

I recommend that you don’t get too fixed on your project and take some time off to think it all through all over again. Let's take another long walk.

Do you still want to finish it?

Here are some options:

It's hard to be a solo dev. When you have an experience like this, perhaps it's time to think about working with other people. Reach out to your contacts, maybe they could use some extra help. And if you've got an idea for a new project - build your own team!

Of course, after all, this is just my experience, but I hope you’ll find it helpful.

I'm still working on the game and there is no pressure, just enjoyment. I wish for you to feel the same.