SEARCH
A minimum of 3 characters are required to be typed in the search bar in order to perform a search.
Announcements
Event
Free Webinar on 5/24: How Predictive Analytics Drives Mobile Conversions & Boosts Revenue - Register Here!
PreviousNext
Business
6 min read
article

A look back at the past month for Spilt Milk Studios, including developing & launching a game, inside another game, on Stadia.
Andrew Smith
Blogger
July 13, 2020

This post was published several weeks ago for our Patrons, with extras and exclusive content. Why not become one?

Not enough has changed since we last wrote. Not in terms of social equality, at least. Lots of pandering, lots of talking, but very little real, lasting, foundational change. So we’re going to remind you of the importance of Black Lives Matter as a movement, and social justice and equality for all, before moving on to our month as a studio.

People are making a stand against fascism and the far right. We want to share the resources that we’ve found tremendously useful.

Uncomfortable Conversations with a Black Man - Part 4 now live! A brilliant video series talking honestly and without judgement about the kinds of problems that Black people encounter.

And this post isn’t covering everything we’ve been doing, because some of it is NDA’d, and some of it is too early to be talked about, even by our open standards. This coming month is going to be chock full - projects are being released! You’ll be able to play them!

SUPER DOOM WALL IS OUT! 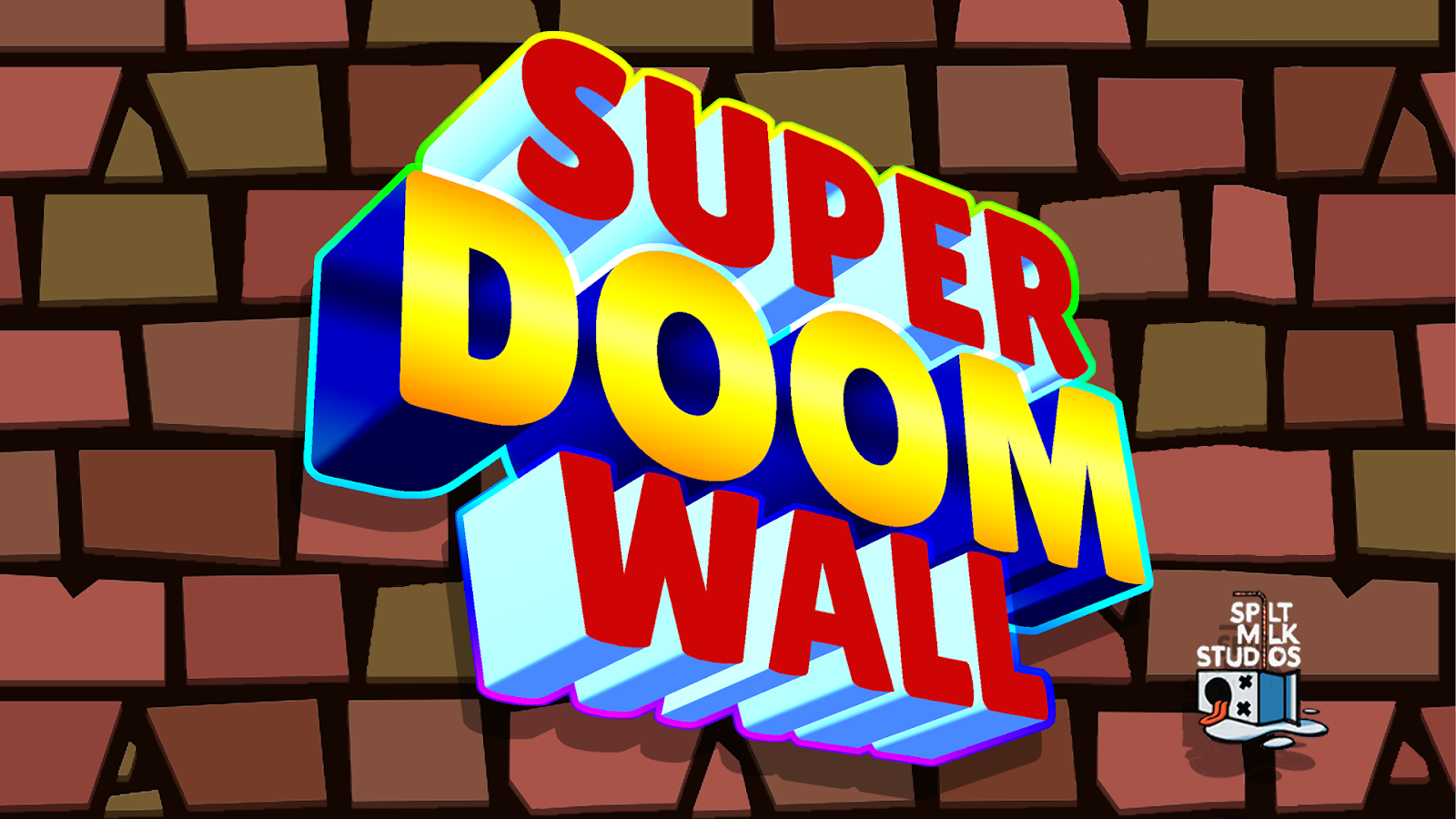 We built Super Doom Wall inside Crayta. Crayta is an incredible game-making-game that takes Roblox and launches into AAA territory with amazing visuals and an incredibly powerful toolset that’s somehow perfect for hobbyists, first timer game makers and even seasoned professionals like us! Made by the lovely folks at Unit 2 games, we think it’s going to grow into a huge success, and specifically the multiplayer aspect - having a shared workspace so you can create games and write code and build assets collaboratively with anyone else anywhere in the world elevates Crayta beyond Roblox, Dreams, or frankly anything else on the market.

What is Super Doom Wall?

Well, it’s a weird mashup of a PvP shooter, Brain Wall and Smash Bros. You compete for points by blasting holes in a giant wall that sweeps across the arena and hopping safely through to the other side!

You get points based on where in the wall you jump through, plus you can score points by knocking other players out of the arena. Damage done to players builds up how far a hit will knock that player, so over time things get crazy.

We drop powerups into the game too, different weapons for players to use in different ways, and these have a huge impact on how players move around the arena and high level play gets super complex.

Finally, the arena itself changes over time. Walls appear and disappear, sections of the floor raise up and lower back down - it’s all very intense and has a ton of depth. Here’s a screenshot from what must’ve been day 5 or 6 of the game’s development. You can see one of the first iterations of the Doom Wall itself, and over on the far right a ringed-off area for spectators. The blue bar is a rotating trap, and the arrows a jump pad. This was all testing out various ideas in the sandbox, and you can even see some of the floor colours as I tried to inject a little variety. 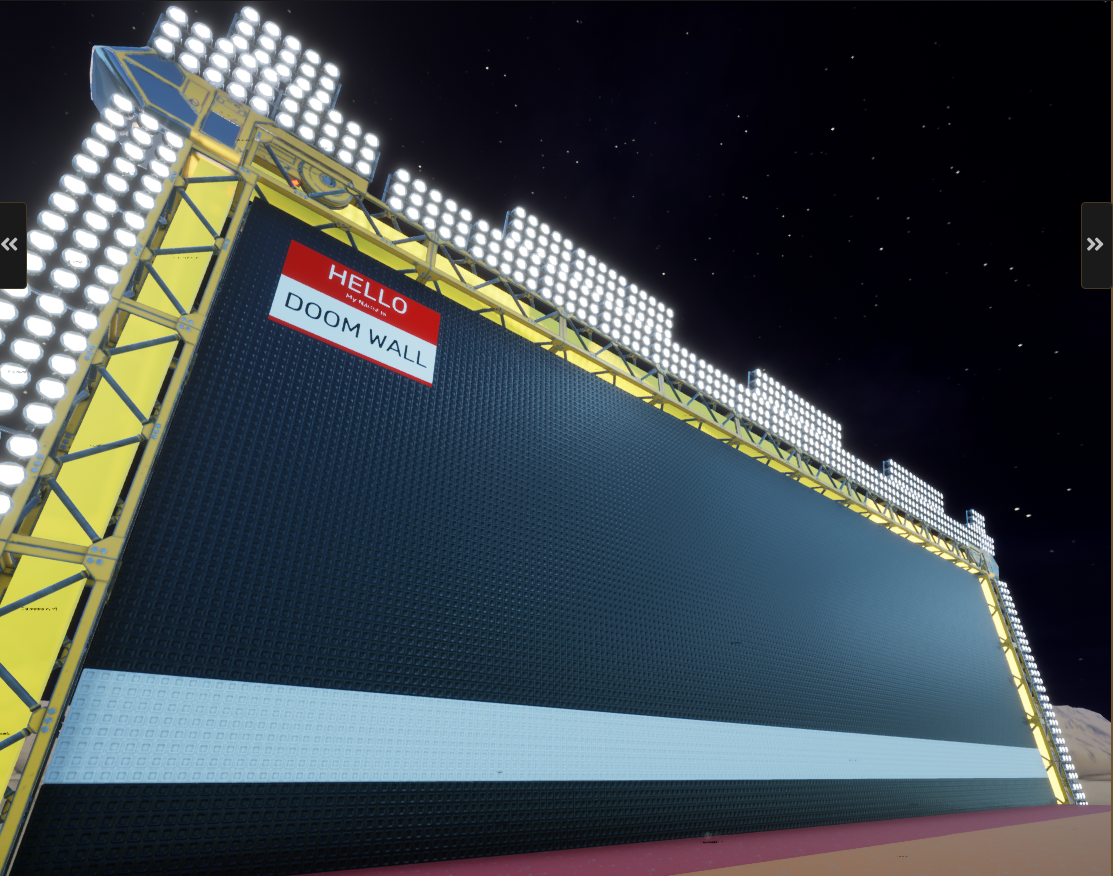 Here you can see some design thinking getting implemented. Well, first up is the excellent visual joke in the top left, but maybe more important is the banding on the wall itself. Under the white stripe is where you can duck. The top of the white bar is standing height. This kind of visual language got developed throughout the project, to help players without resorting to tutorials. 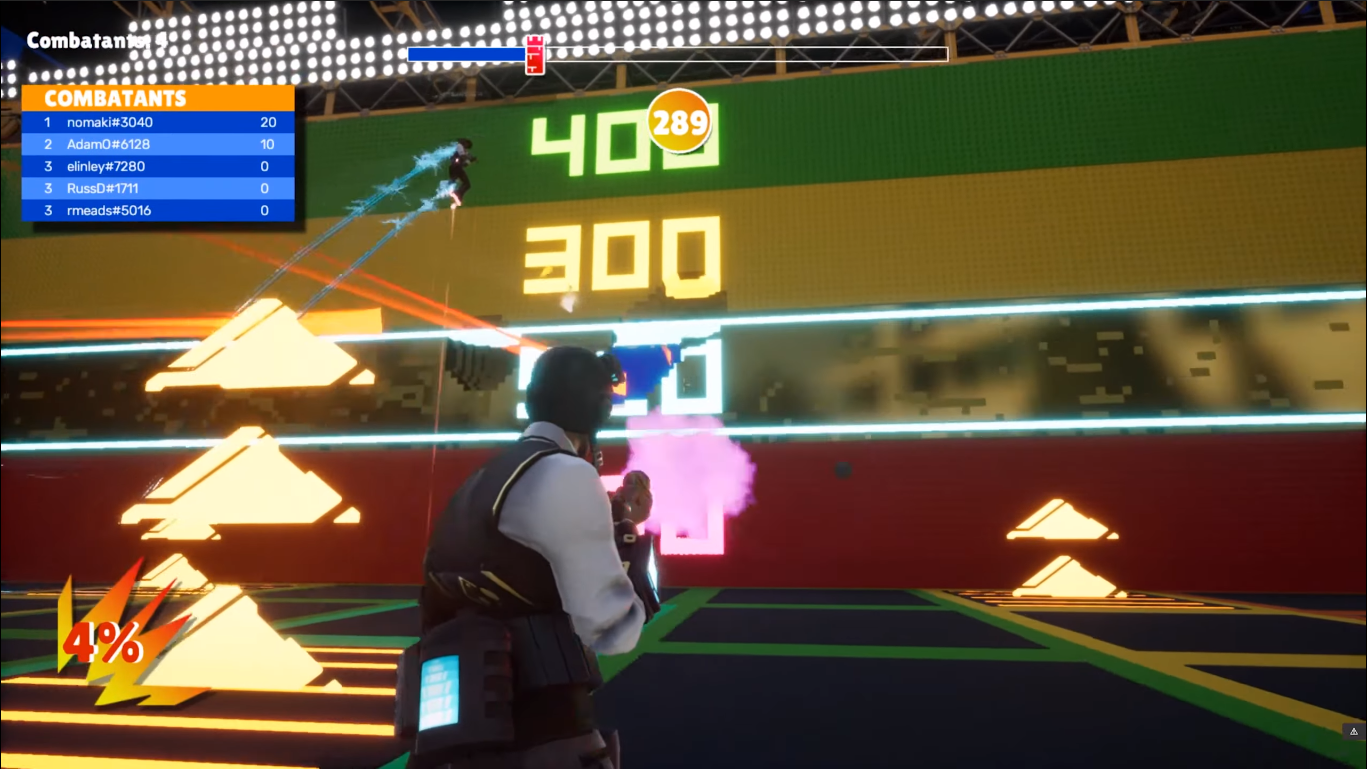 Here you can see the (nearly) end result. Various bands of wall that have scores associated (these change height between rounds), colour coded with their points value, and a nice shiny gold-and-neon effect to highlight the best band to try to blast through. 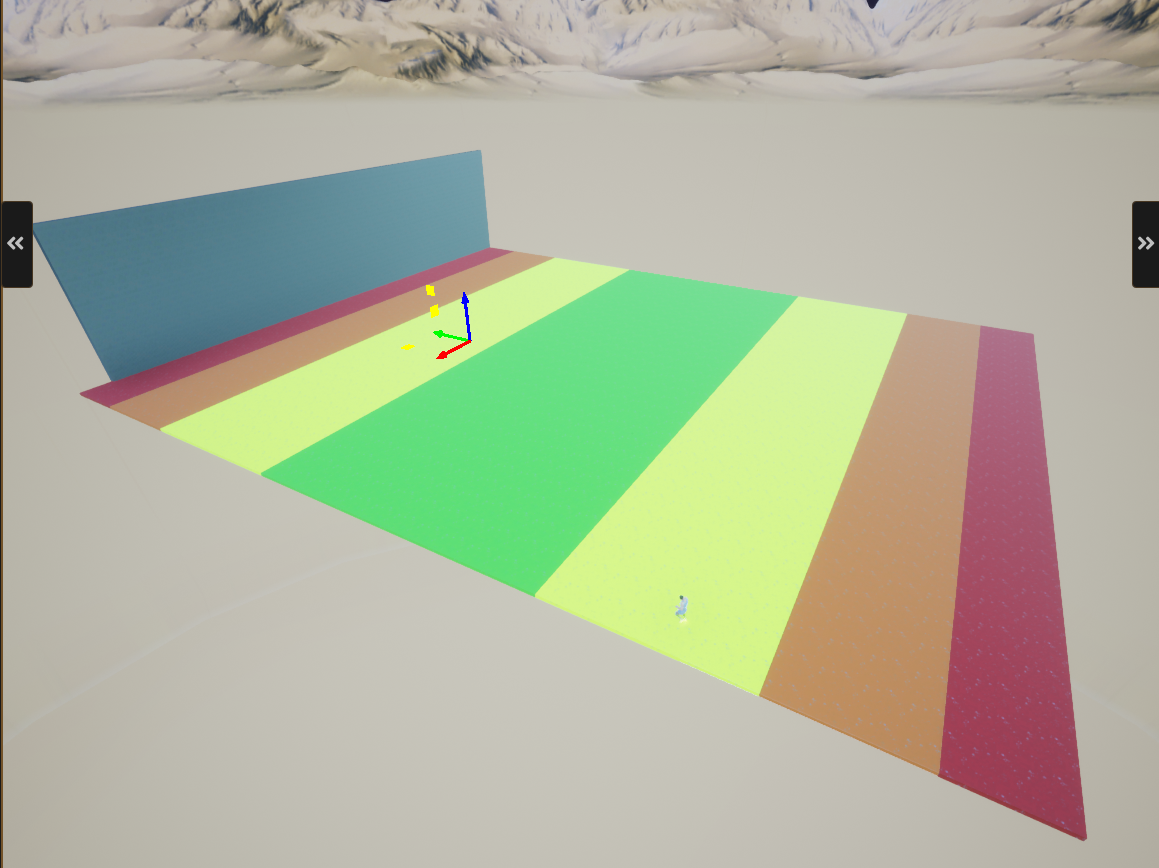 Here you can see a really very early shot of the Arena. We’d still not decided on the size or scale of the game, but already had identified a need to tell the player where they are in relation to the edges of the arena. You’d frequently be running backwards away from the Doom Wall while firing shots at it and other players, so knowing that if you’re standing on a red area you’d best be careful was incredibly useful. 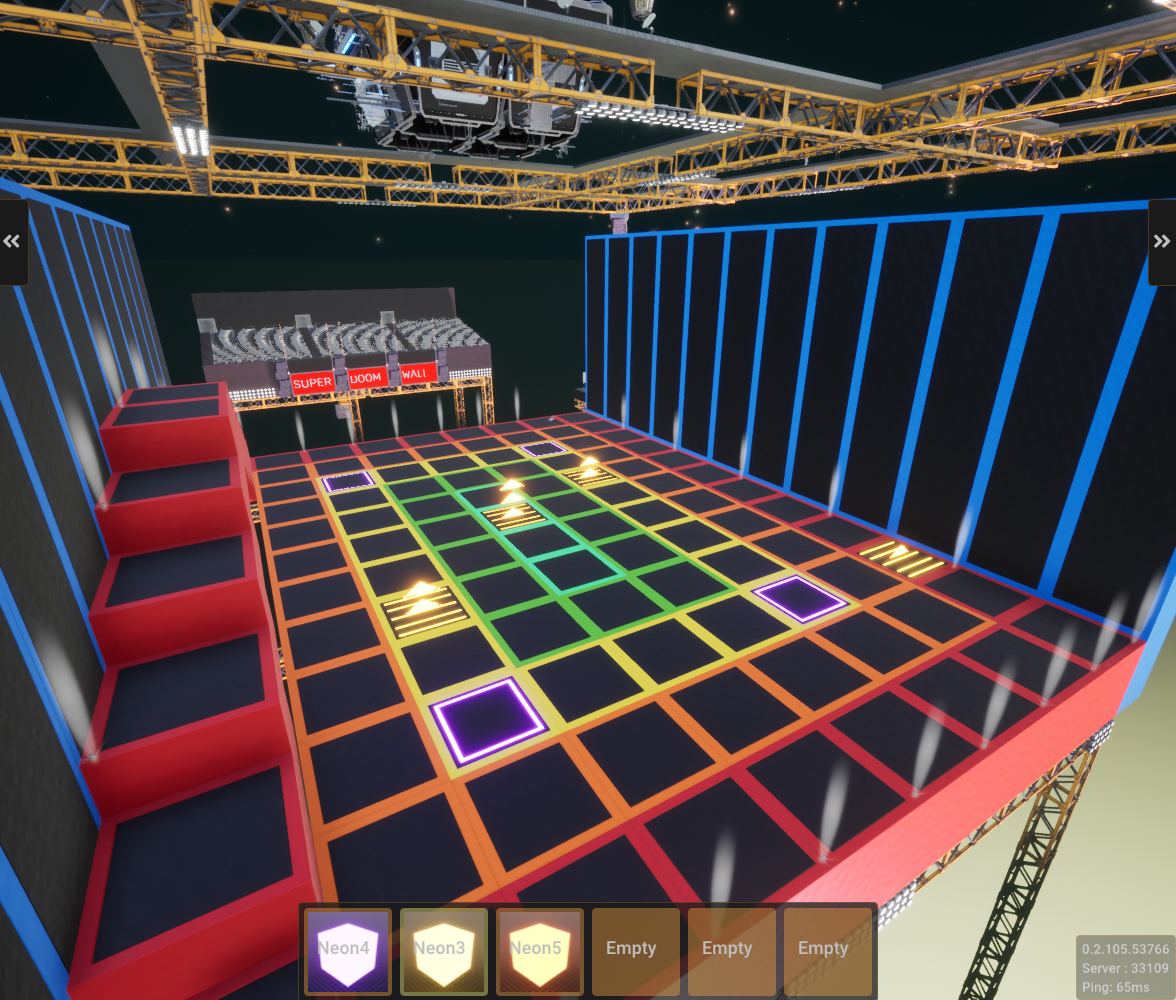 This is how that ended up in the final arena. We made sure to extend the colour banding in all directions out from the middle, because while the safety walls are up in this shot, they can disappear! You can also see how we extended the aesthetic of the game - a Future Gameshow type vibe not a million miles away from The Running Man mashed up with Fun House - and defined a visual language to include tiles which move (pink neon) and tiles that launched you upwards (golden stripes).

Crayta is so fast and easy to iterate in, so you can get into this really useful stage of balancing and tweaking really early on in a project. It’s tremendous!

But even when you’re an incredibly experienced team using an amazing piece of software to create one of the most fun and original new competitive shooters ever seen… sometimes bugs happen. And sometimes they are awesome! Like this one that meant the damage model went nuts. If you take a hit at 8000%+, let me tell you, you will fly. 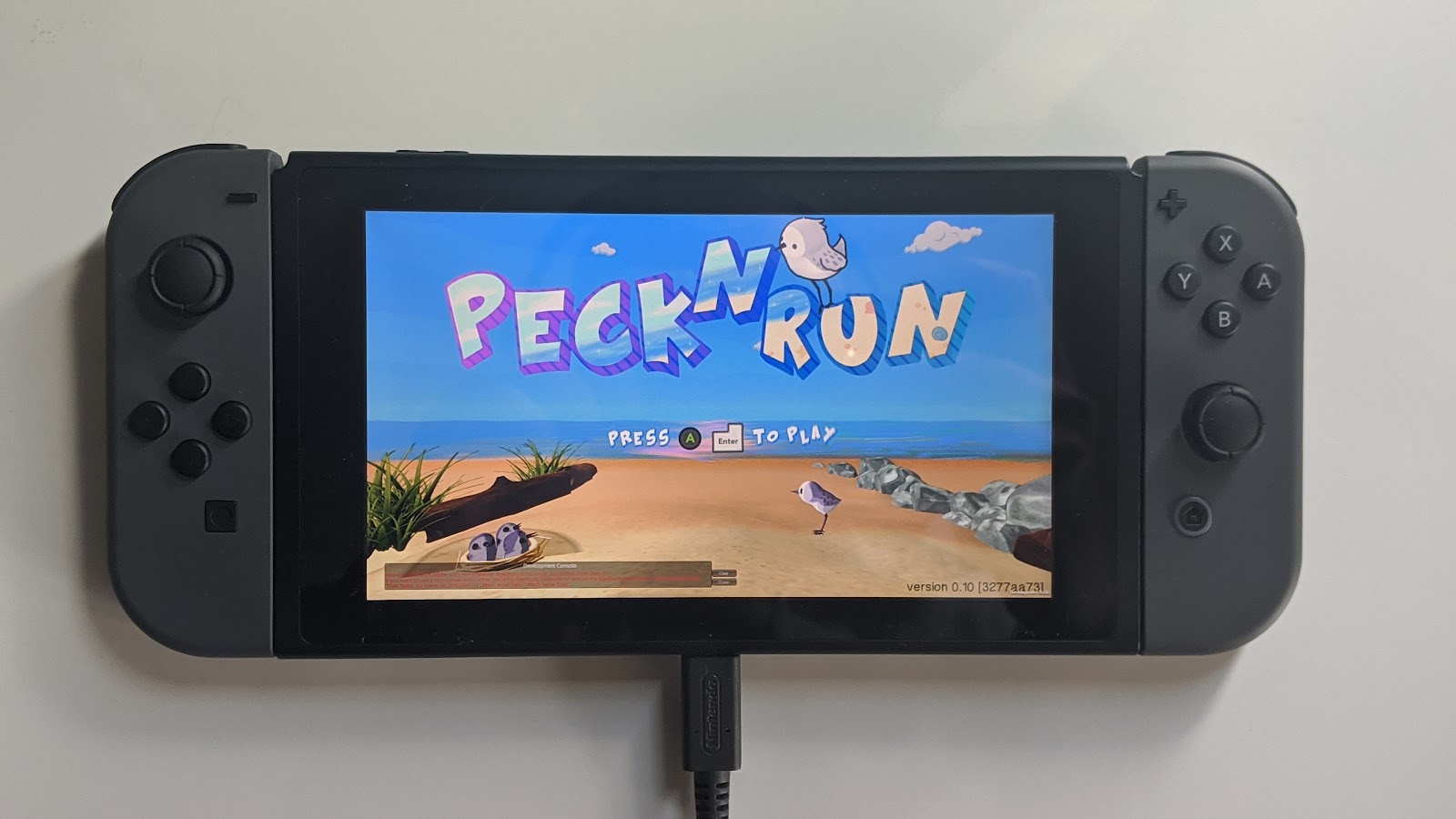 We’re very excited to confirm we’ve got 3 interns joining us for 6 weeks! We’ve got a Programmer, an Artist, and a UX Designer! We’re going to be sharing bits and pieces of what we’re doing with them over on discord, but it’s safe to point out that the last time we did this Peck n Run was born, so… you know… it’s gonna be cool!

So yeah, if you want to get this information when it's hotter and fresher, check out our Patreon. Maybe become a backer? We've growing and evolving it, so expect plenty more exciting stuff soon!