We’re continuing our series of collaborative articles with Jason Canam of Household Games, the studio and developer behind Way of the Passive Fist to talk about making a game you love, and making it so that as many people as possible can play them.
Jessica Paek
Blogger
November 26, 2018

We’re continuing our series of collaborative articles with Jason Canam of Household Games, the studio and developer behind Way of the Passive Fist. This week, Jason talks about making a game you love, and making it so that as many people as possible can play it by removing as many accessibility barriers as possible.

My studio, Household Games, was founded in 2016 by myself and my business partner, Bridgid, who is the business manager.

She’s the business-minded person, and I take the role as the creative.

Toronto has a really healthy, vibrant, diverse development scene with so much talent and so many cool people.

I worked in indie games for several years before I started the company, so I knew a lot of people who did awesome pixel art and knew how to make really wicked music.

So, I reached out and we built a team, and we immediately knew what we wanted to make: Way of the Passive Fist, our first title.

It was just under two years later that we launched the game.

Our goal was to not overreach, not go crazy, but to develop something we knew a sliver of people would enjoy.

We found our audience, and we’re really thankful for the people who play it and say, “This is just scratching an itch I didn’t know I had.”

Hearing that is the best.

When you talk to indie devs they’ll tell you, more often than not, that they make the kind of game they love: developers make what they play.

When you have that choice– to make what you want to make- you’re going to make something you love. For me, it was beat-em-ups.

I’m a huge fan of the genre, and I’ve played a ton of them. They’re some of my favorite games of all time.

So the creative side of me asked, “How can we create something interesting with that?”

I really wanted to make my favorite type of games to play, and to offer my own take on them.

I’m also a big fighting game player. I love to play all of them: Street Fighter, Mortal Kombat, and Soul Calibur 6, just to name a few.

I think it’s really cool when my opponent tries to whip out a super move and I have the right answer to deflect it, parry it, or block it.

So I thought it would be cool to take those ideals and put them into a beat-em-up.

One of my big criticisms of beat-em-ups is that they can be very button-mashy and kind of repetitive.

Even though I love beat-em-ups, they’re often games I can play while I’m chatting with a friend or watching something on Netflix because they’re the kind of games you can play on auto-pilot.

In Way of the Passive First, you have to concentrate, and you can’t just play on auto-pilot.

That’s one thing I wanted to bring to the genre.

I wanted to bring a real focused element, and that’s one thing people have commented on.

A lot of people––especially those who’ve been streaming it or making YouTube videos––have said “Man, I can’t look at my chat while I’m playing because I have to be focused the whole time,” or “I can’t really do commentary.”

The way Jeff and I have always demoed the game is that we’ve shown in pairs: there has to be a dedicated person running commentary and a dedicated person playing because it’s a focused kind of title, which for me, was the intent.

We wanted to make a game you couldn’t sleepwalk through, a game you had to intensely be focused on.

That’s also why we included the difficulty settings that allow you to be really fluid and flexible.

We wanted to give each player some leeway because we didn’t want to push people away.

This game is about timing, yes, but we wanted to let players learn at their own pace.

A lot of games send the message that you’re going to die a million times or that the game is a brick wall.

What we want is to turn you into the master. You’re going to be the master.

In Way of the Passive Fist, we give you the tools, we teach you, and if you put in the effort, you’ll  be the unstoppable master.

That’s the fantasy we wanted to fulfill.

No one’s going to touch you. You’re going to be unbeatable.

We made Way of the Passive Fist as accessible because I believe games are for everyone.

For the past 10 years, I’ve gotten a chance to work on mobile games, arcade games, and indie games.

With games I’ve worked on in the past for other studios, sometimes there would be elements that were inaccessible to certain people, whether it was a color element that colorblind people couldn’t deal with, or that the controls weren’t useable by certain players.

There was always a bit of an obstacle.

Because game development is a complex, difficult process, it just so happened, in those cases, when I was working with those studios, we’d get to the end of a project and find out, unfortunately, that some people couldn’t experience parts of the game as intended.

They couldn’t fight enemies with a certain type of type of shield, for example, and we’d think, “Well, we just spent 3 years making the game, we can’t change it. It’s too far along.”

So, once again, the joy and responsibility of being your own studio owner, your own indie studio head, I wanted that to be a priority for me.

In 2016, shortly after starting the company, I was watching Summer Games Done Quick 2016, the charity speedrun marathon.

That’s when I saw Halfcoordinated do a speedrun of Momodora.

I had actually been a fan of his for a few years before, I’ve watched him speedrun Vanquish, and Transformers: Devastation.

He speedruns some of my favorite games, and he’s such an excellent player, also a very inspiring figure.

When he finished this speedrun, he took a few minutes on camera and did a nice speech about living up to your expectations and how everyone can do better, and I took that to heart.

So I reached out to him on Twitter, and he’s an awesome person: very welcoming and warm.

I managed to get on a Skype call with him, and I told him I was making a game and I asked for his help on the accessibility stuff and for him to give us a bit of guidance.

Up front, before we even build one line of code, he told us what we needed to pay attention to, and we had a nice road map because we had guidance and expertise.

Throughout those conversations, at one point, he brought up that there are players who have cognitive disabilities.

Those are players that have lower than average reaction times, players that get overwhelmed with a lot of information.

When he was describing this, I was thinking, “There’s actually a bit of 1-1 ratio here in terms of how we make difficulty settings.”

Because when you want to ramp up the difficulty, you just dump more enemies.

So, we decided to let people control the difficulty themselves.

That’s where we kind of decoupled everything, but it’s because we had experts to help us out.

There’s Halfcoordinated, there’s AbleGamers, Ian Hamilton, and others, but the one thing that they all have in common is that they’re very open to help and that they want to help developers.

It wasn’t a secret, it wasn’t something we were keeping under wraps until launch, it was something that we were talking about very early on.

My main thing was to say that it wasn’t expensive.

A lot of people wonder they go through the trouble of making remappable controls and having all these extra features, if it will add to their budgets?

For us, the answer is no. We planned early and it didn’t make our budget bigger, it didn’t make the game cost more, and it was totally the right thing to do.

It would have been exactly the same as if we had made the game without it, we just wound up with a better game.

Some people think, it’ll add a month to my programming time, so they’ll have to pay my programmer an extra month.

In our budget, we had some money set aside for consulting and consultants, and it just so happened that Halfcoordinated was the consultant.

It was a great experience, and I got to work with one of my heroes (Halfcoordinated), which was a huge bonus for me.

How greater accessibility has impacted our community

We’ve gotten a lot of great feedback, so we think that it’s helped expand our community and allowed players to engage with us.

We’ve basically gotten more people to play the game because we’ve removed as many barriers as we could.

We don’t pat ourselves on the back and think we did a perfect job, because we’ve heard back from some players that there’s still some stuff we could do better next time

So, for a future game, there’s some other stuff we want to do better.

One of the things about being an indie is there’s no corporate barrier.

I want our players to talk to me, or anyone else who helped make the game, directly.

We fix as much as we can, as often as we can.

There are certain things we can’t, and we just say, “We’ll keep you posted, and when we can do it better next time, we’ll let you know.”

There’s nothing wrong with that, because it’s all the cycle that makes everything better.

The players, the audience, the community: it’s what we live for.

Making games is fun in itself, but having people play it is the real payoff.

Everyone wants accessibility, but it’s important because everyone should be able to play games.

For me personally, it’s just because I think video games are the coolest.

Everyone should have the right to play games.

For lack of a better way of saying it, I think it’s something every game maker, every game developer should keep in mind as much as possible.

I believe no developer ever wants to exclude anyone, so it’s important to note in the cases that sometimes a game isn’t accessible in some ways, it was absolutely not done on purpose.

When you let them know, 100% of the time, a developer reacts to it saying, “Oh, I didn’t realize that, but I really want to do it.”

Whenever I’ve heard people who get to visit studios and talk to developers, none of them ever argue saying “No, we shouldn’t this.”

It’s always, “Oh, I didn’t realize, but you’re telling me that if we just do this, it’ll be better for color blind players? Then, hell yeah, we’ll do it!”

Everyone wants it, but it’s important because everyone should be able to play games.

I wouldn’t want anyone to not be able to play a game I make.

No one should miss out because it’s a really cool way to experience storytelling and a really good way to spend time.

Everyone who wants to, should be able to.

I try to remind myself not to overcomplicate things. It doesn't have to be more complicated than that.

Gaming for everyone, period. 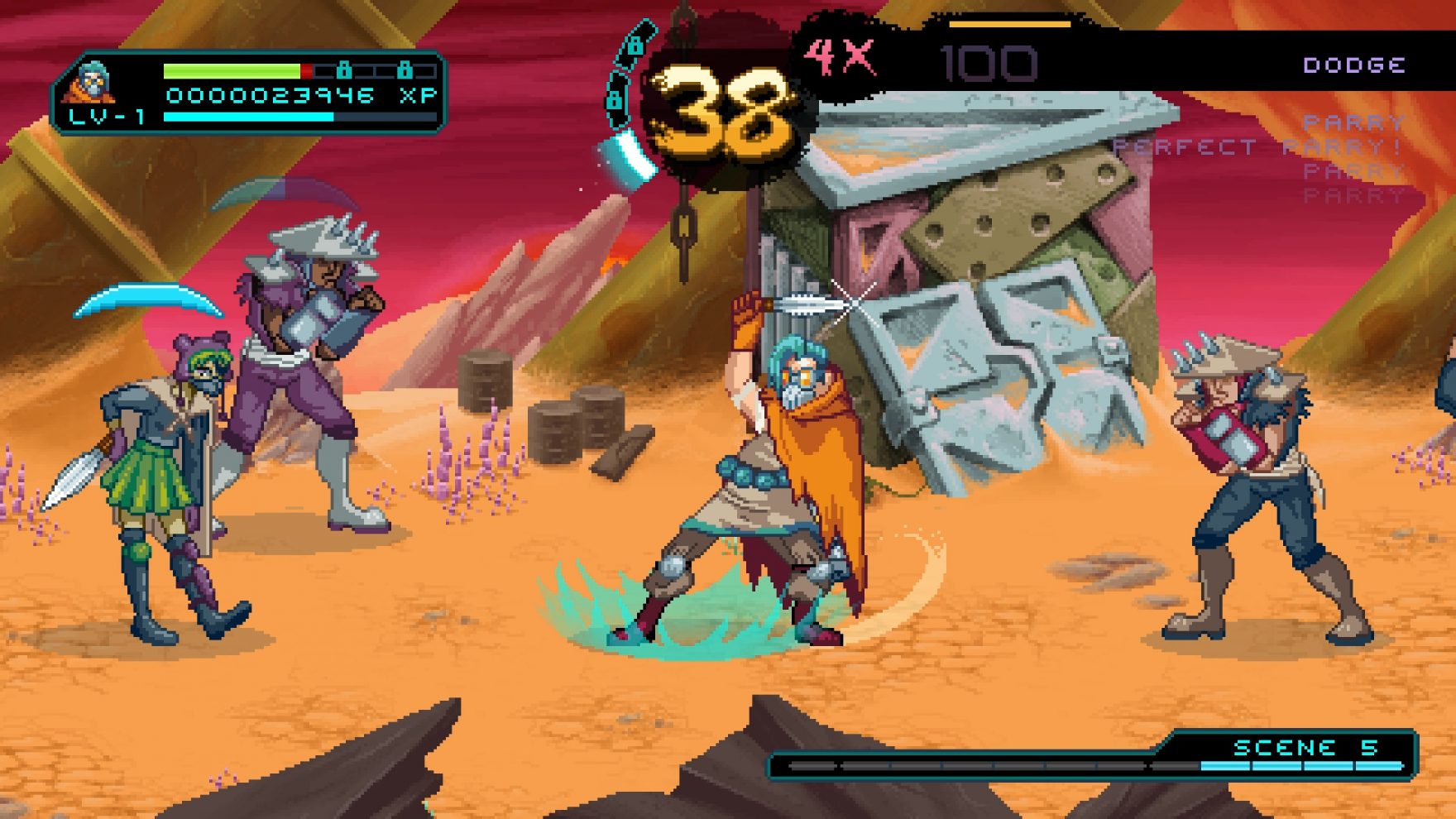