Games in the media in 2016 – Overwatch comes out on top

A look at the overall media coverage of video games in 2016.
Thomas Bidaux
Blogger
February 14, 2017

To complete the usual series of blog post reviewing the past year, I present to you 2016 and video games in the media.

Like last year, bear in mind that we are using our internal tool to collect these numbers, and understanding the methodology is important. It is particularly worth mentioning this year Pokemon Go is definitely making things crazy. Or crazier than usual I should say. In order to account for that, a lot of the numbers presented here are limited to video games media. We do have General Interest and Tech media in our tools, but they are not as exhaustively collected on our end. 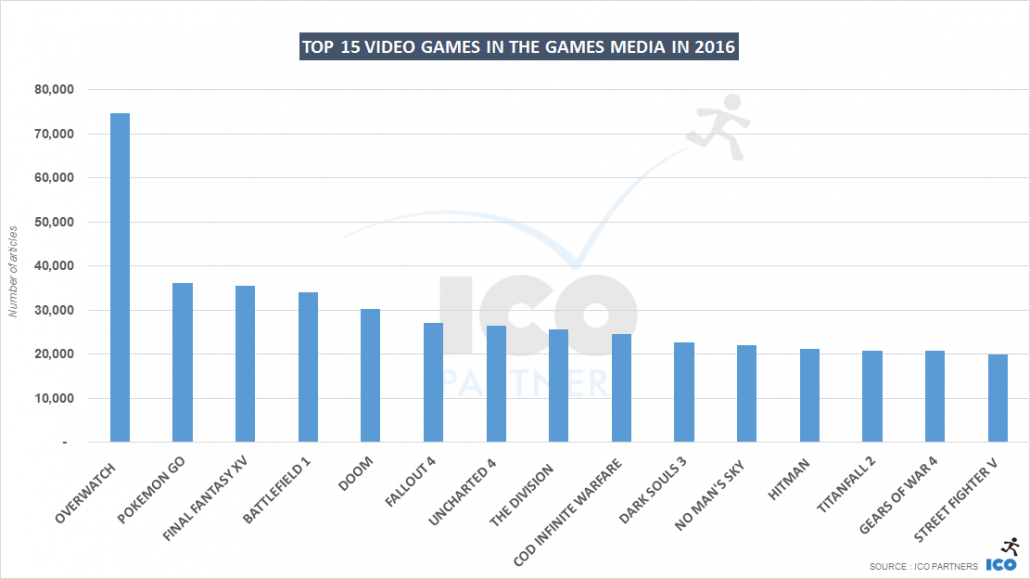 Let’s address Pokemon Go now. I wrote about the game shortly after the launch, and while things have calmed down since July, the game is still receiving an impressive amount of coverage daily, even at times where there is no new update to discuss.

This being said, it wasn’t the number one game mentioned in the games media (important to be specific here), that was Overwatch.

Pokemon Go, while announced in September 2015, received very little coverage until it launched in early July 2016. The amount of coverage collected here is basically only 6 months worth, where Overwatch was already well covered prior to its launch in May.

If we compare these numbers to the ones from last year (which take into account a wider range of types of media), Pokemon Go’s performance is striking as it is a Nintendo game (only Splatoon managed to barely get in the top 15) and a mobile game (there were none in that ranking in 2015).

Overwatch is also impressive as it had 50% more coverage than any game in 2015. The online nature of the game, with its constant updates, coupled with the power of the Blizzard brand, pushed the game to the top here, making it by far the game with the most media presence in 2016.

Overwatch is also striking in the sense that it is one of the only two new IPs in this ranking (The Division being part of the Tom Clancy’s franchise), alongside No Man’s Sky. Many industry commenters pointed to No Man’s Sky’s hype as being the main reason for its fall from grace, and you have to give them credit here, when you see the game is in the top 15 most covered by media game of the year, while coming from a small independent studio. Even the Sony PR machine can’t be the only thing at play here, as many very large productions didn’t manage to make it in these rankings. The game’s hype took on a life of its own, and got big.

For the fans of the respective series, it will interesting to note that Battlefield 1 secured about +40% more coverage than this year’s Call of Duty game. Year-on-year, Call of Duty’s media coverage dropped about -12%. 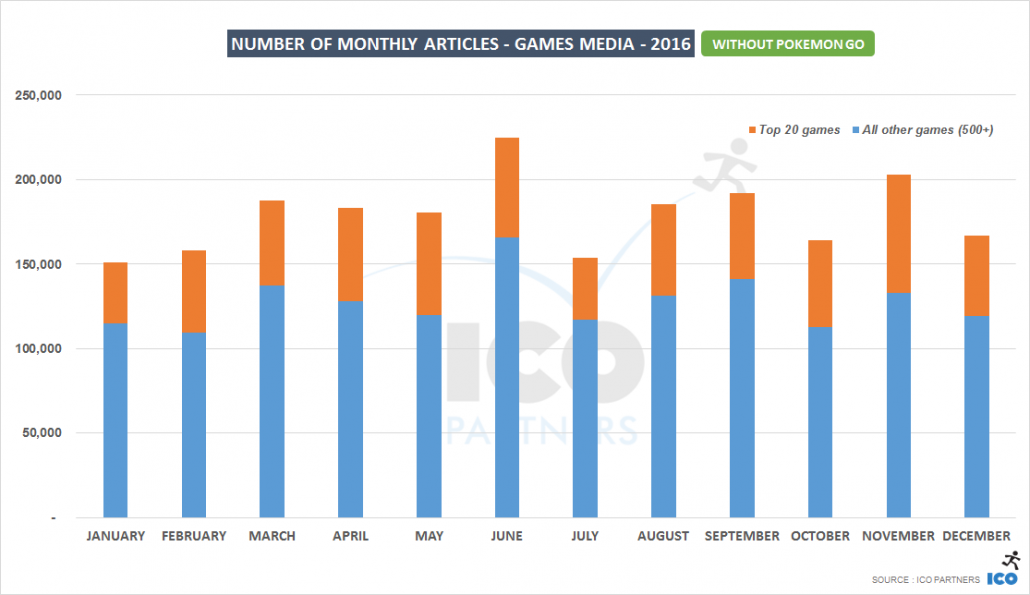 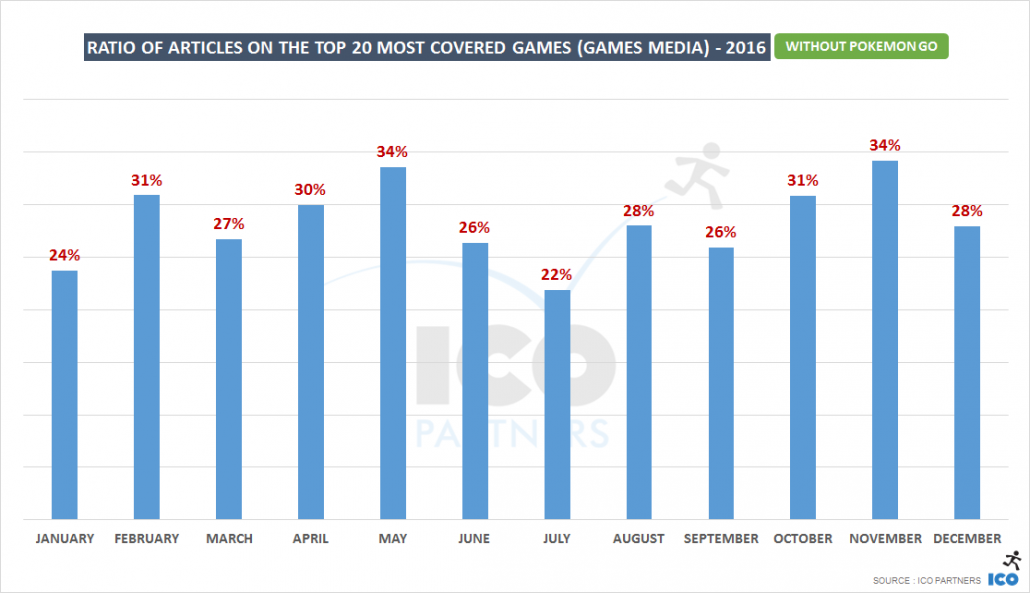 For a very long time, we wanted to run these numbers. As ICO is also a PR agency, a lot of the discussions with the studios and the publishers come around to the best timing to do a particular communication. The above is a great way to understand when certain periods are swamped, while some are on the contrary very light.

You’ll see that I removed Pokemon Go from the data. The game was so dominant at its launch that it was skewing the data (more than 7% of the articles in the games media in July 2016 mentioned Pokemon Go). Removing it is not a perfect solution either, but it draws a slightly better picture.

There are different ways to understand these numbers, but here are my takeaways:

While making these graphs, the question came up about the number of games beyond those top 20 games. The truth is, we don’t know how many games communicate in any given month. We do know how many games are released on Steam on average, and this is where the 500+ number comes from. In reality, you can expect all the games releasing to have some form of communication that month, but you would also need to add all the games that are announced, the games that are communicating about their upcoming release, the released games having some newsworthy announcement, like an expansion, or a DLC release, not to mention the live games with significant updates.

That 500+ figure for games is quite conservative in truth. 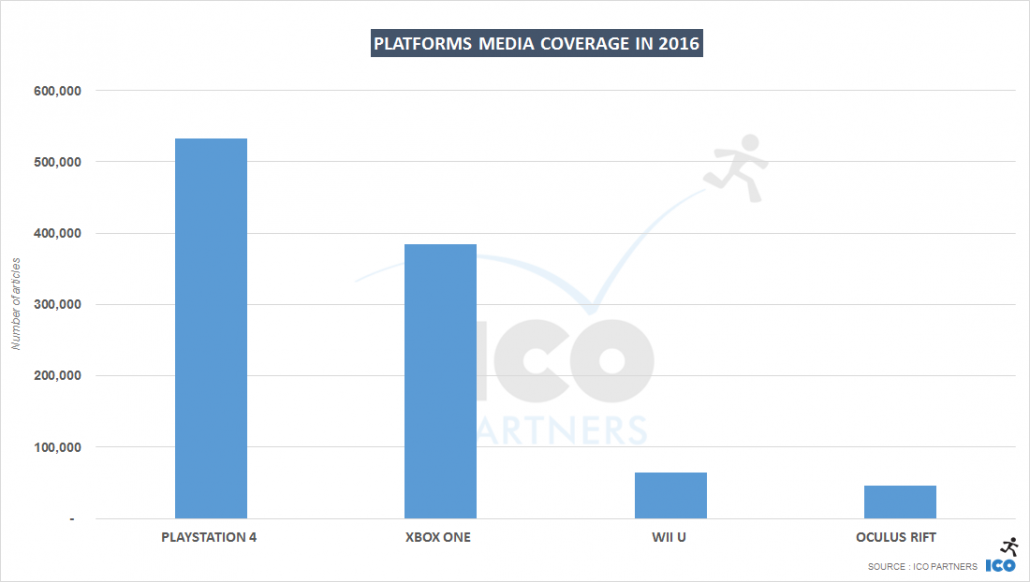 2016 was interesting as far as platforms are concerned. While there were no new console coming out, there were upgrades, iterations and major accessories announced and released. The Playstation 4 and the Xbox One are hitting their stride while the Wii U is in its last year being the main console for the Nintendo line up, with the Switch being around the corner.

For Xbox One, it was also a good year compared to 2015 (+18%), a growth in coverage not necessarily being a given considering the most important announcement, Project Scorpio, related to a new version of the console to be released in 2017.

The Wii U year-on-year numbers see a steep decline overall (-24%). Comparing it to the Oculus Rift, which is a niche platform that had its first release in the year both shows how much Oculus has accomplished, and how much the Wii U has dropped. 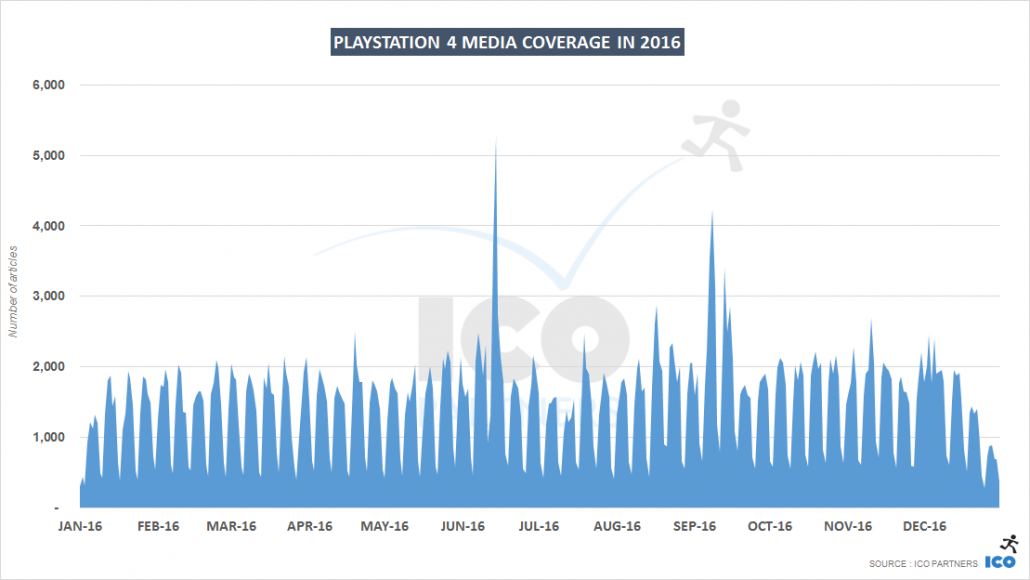 Sony’s communication strategy is well established by now, with most of its coverage originating from E3 and a combination of their own events and industry conferences.

gamescom, despite the absence of a press conference, is still an important source of coverage overall, but it does come after the press event ahead of the Tokyo Game Show.

And like last year, the Playstation Experience event in early December was a tremendous success for Sony as far as media coverage is concerned. 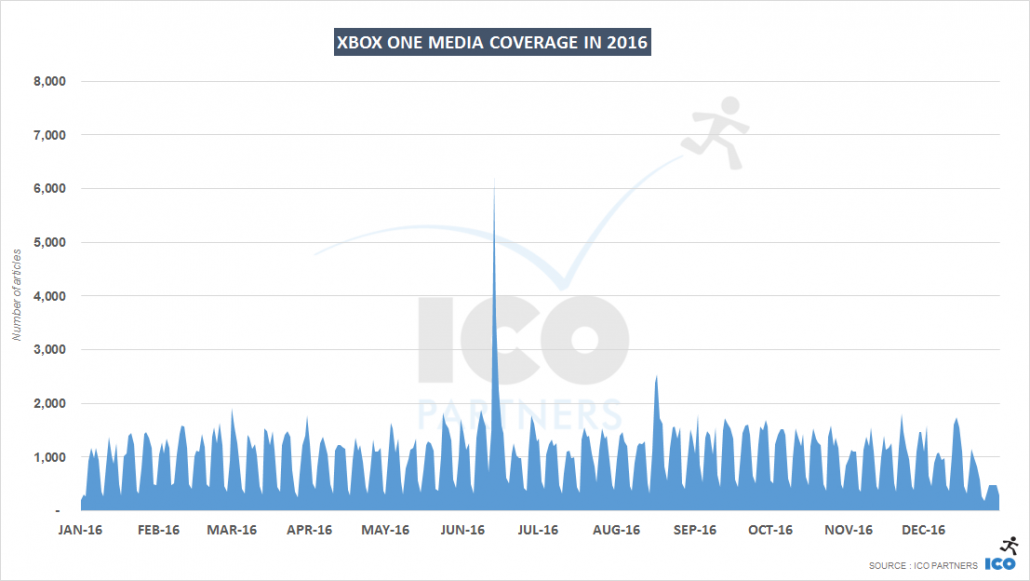 The Microsoft coverage over the year has fewer events sparking spikes in coverage. The two most notable ones are the E3 in June, and gamescom in August, even though, like Sony, they didn’t put a press conference together in 2016.

Microsoft seemed to be on the defensive in its communication strategy the whole of 2016 and the fact it still managed to grow the coverage is a good sign. Hopefully they will be more aggressive this year, with the Project Scorpio device coming, to shake things up a bit.