SEARCH
A minimum of 3 characters are required to be typed in the search bar in order to perform a search.
Business
12 min read
Featured Blog

As per the tradition, this is the media coverage analysis of the 2017 E3 that took place last week.
Thomas Bidaux
Blogger
June 20, 2017

[EDIT – the dataset initially used didn’t properly cover the articles published on the 10th of June, making the EA coverage much lower than it should be. I have replaced the following graphs: Top 15 Games; Publishers Conferences Compared; Publishers in the Media]

It’s that time of year again: the week after E3, and time for me to go over the numbers and media coverage from the show, as per tradition. If this the first time for you, please fee free to have a look at the methodology used, and read the blog posts for 2015 and 2016.

First, looking at the biggest players at E3, the console manufacturers, in many ways this was an interesting year in light of their performance at previous E3's. 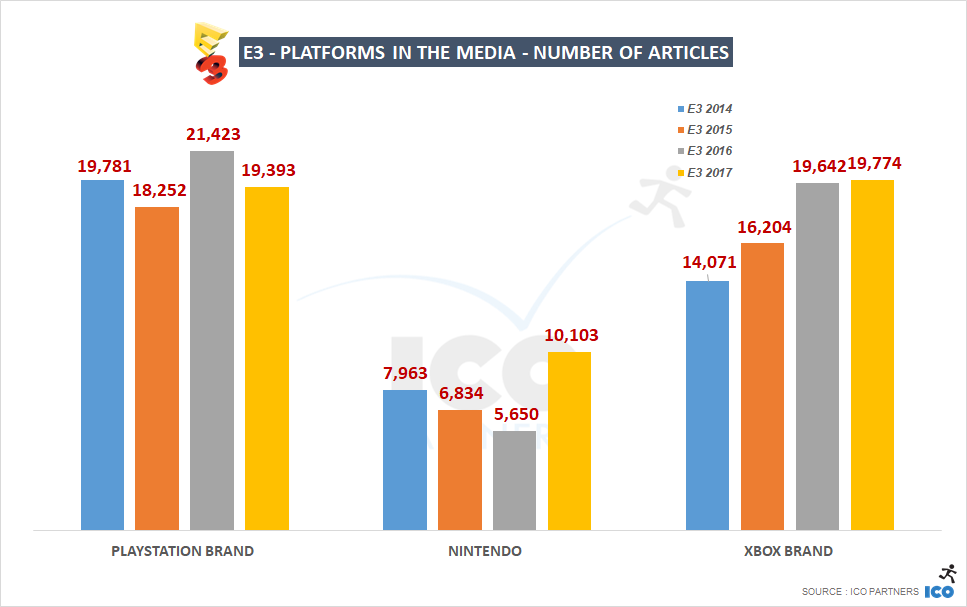 For the first time since we started measuring media coverage at E3 in 2014, Sony is not leading. It has to be said that the gap between them and Microsoft is very small, but this comes on the back of Microsoft growing for the 4th year in a row, and where Sony had its 3rd best performance out of 4 companies (on the back of its best performance last year).

Nintendo, on the other hand, has had its best E3, doubling the coverage they got last year. The Switch is clearly a commercial success and is also popular with the media. With a smaller lineup than its competitors, it is quite the performance for them. The wider 3rd party program, with Ubisoft's partnership at the forefront, is likely a significant contribution.

Like last year, I created a Google Spreadsheet to list all the announcements done at E3's press events - feel free to have a look for your own analysis of the lineup announced for each company:

Personally, here are my thoughts on the 3 manufacturer press events:

Looking at specific platforms, a few things are interesting to highlight: 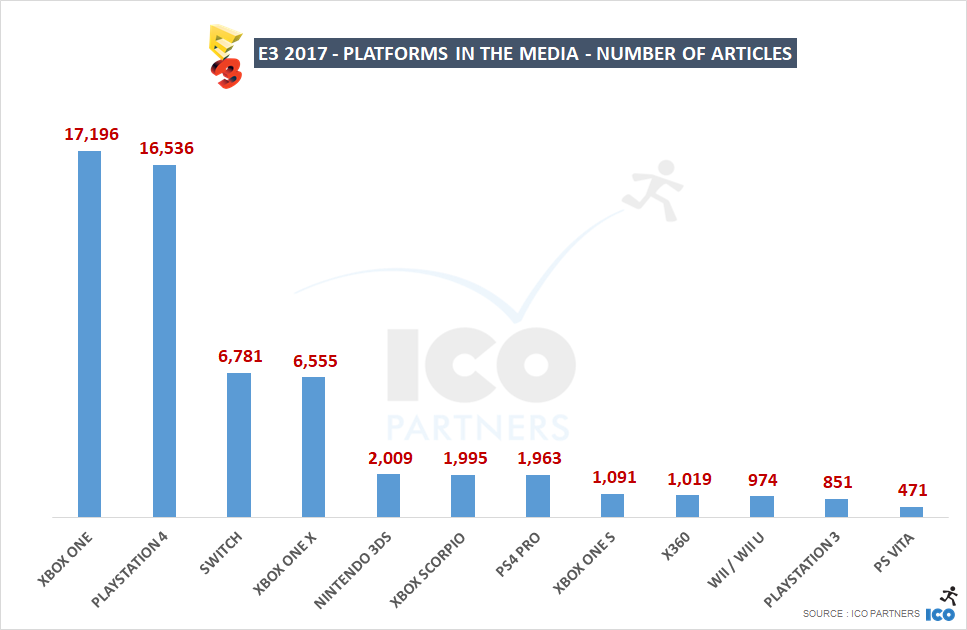 The Switch got more coverage than the Xbox One X last week - which is impressive considering the higher profile of the Xbox brand. Also impressive: the 3DS is still getting a decent amount of coverage. 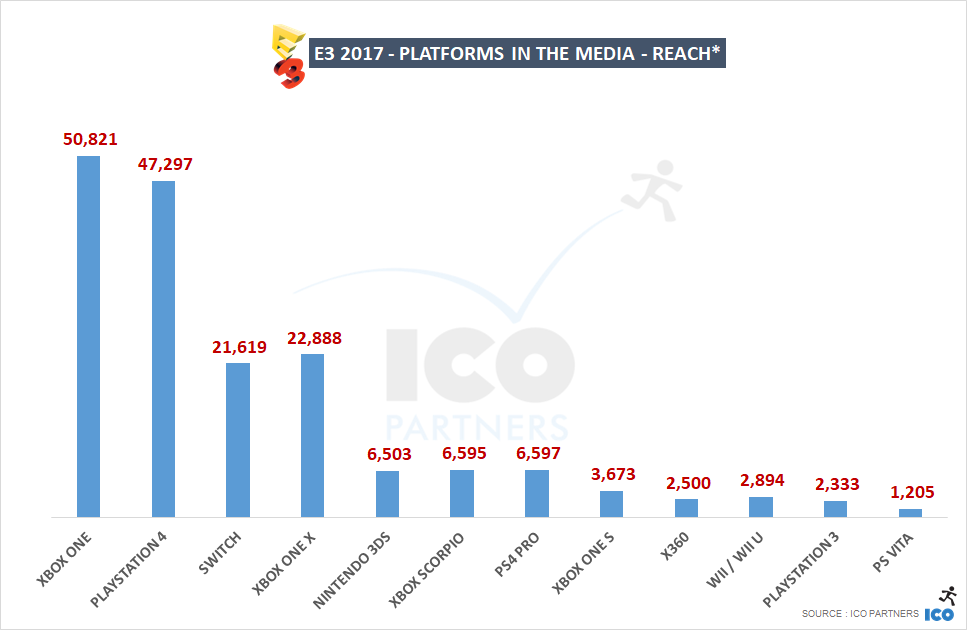 The main point to consider, looking at the reach of each console, is the fact that the Xbox brand seems to be very good at getting covered by higher profile media. The short lead the Xbox One has over the PS4 is translated to a more significant lead in reach. And the Xbox One X, being slightly behind in terms of the number of articles compared to the Switch, sees a significant lead when considering the corresponding reach.

Finally, I wanted to check the VR device coverage, to compare it with last years. 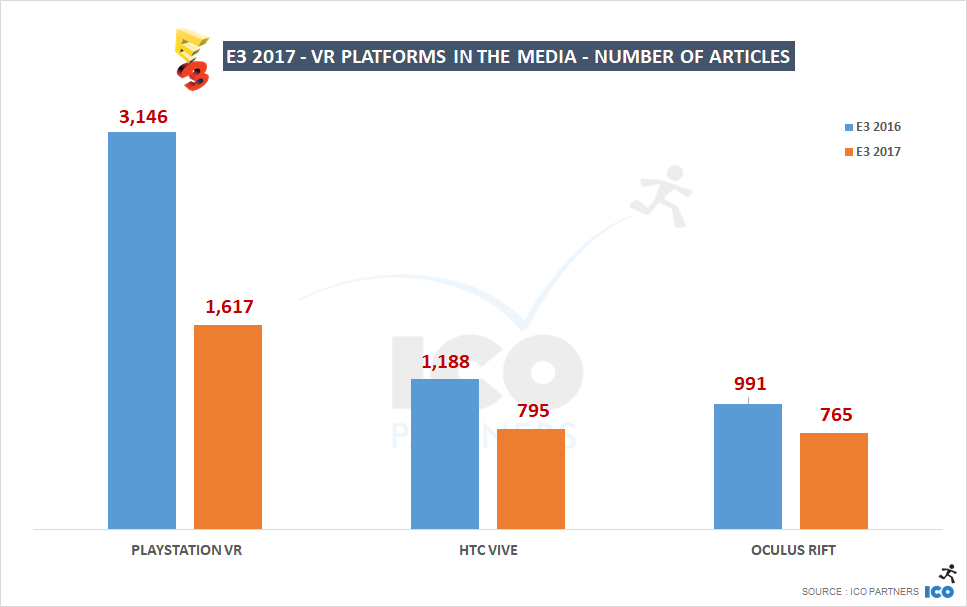 Again, PSVR is leading. But, there were about half as many articles as at last E3. That's a steep decline, most likely due to the fact that the speculation on VR is now in a different phase, with all the devices on the market and being known quantities.

Like the previous year, I looked at the top games based on the volume of media coverage. 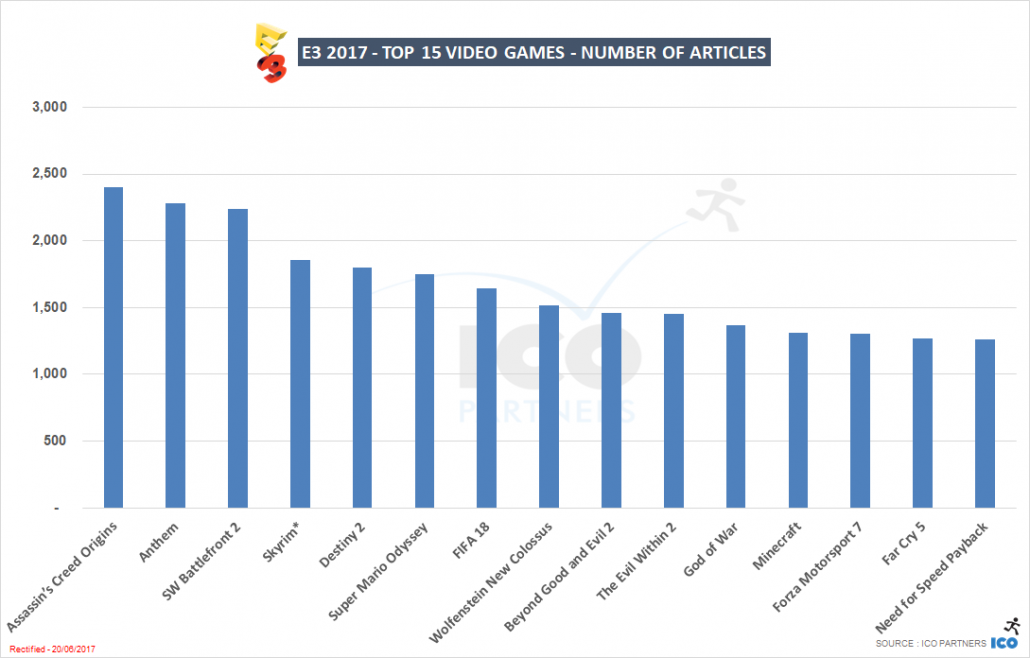 Here are a few thoughts coming to me immediately after looking at this list of games: 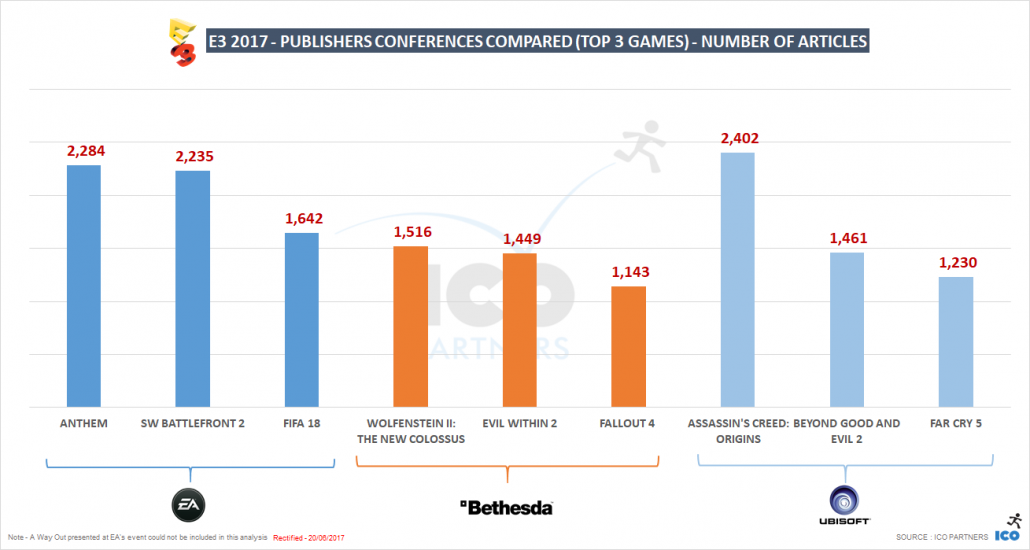 There were 3 publisher-powered press conferences this year, with Square Enix skipping it again this year. Ubisoft, after three years of growth, is finally coming on top, in large part thanks to the Assassin's Creed Origins coverage.

[This was what was initially written in the article] EA didn’t seem to manage to secure the right attention. It might be the EA Play formula that didn’t work as well as last year (a single location this time), it might mean the lineup didn’t catch the attention in the same way that last year did. It has to be said that FIFA 18 being a top game for EA this year isn’t actually a good sign, as FIFA 18 didn’t get as much coverage as FIFA 17 had last year. The most disappointing of all is the coverage for Battlefront 2, considering the power of the Star Wars brand and the release this winter of Episode 8.

[EDIT – With the proper dataset, EA’s performance is much more in line with the profile of the company over the past few years, with Star Wars Battlefront II as a top game, and Anthem’s performing very well, in great part due to the double featuring at the EA conference and the Microsoft event]

Bethesda did OK - the two new games obviously getting most of the coverage. But the really strong IPs of the publisher, Elder Scrolls and Fallout, had no revolutionary announcements around them, and in that respect, Bethesda still performed quite well considering.

Finally, Ubisoft's conference was praised by many attendees and analysts as the best of the show. It had a wide range or projects showcased, an unexpected number of new projects revealed. The lineup was very strong, and then Ubisoft also managed to throw a few curve balls. The fact that they're going after the declining toys-to-life market with Starlink was totally unexpected, for instance.

Looking into the publishers' names and how often they were mentioned in the media reinforces the apparent success of Ubisoft: 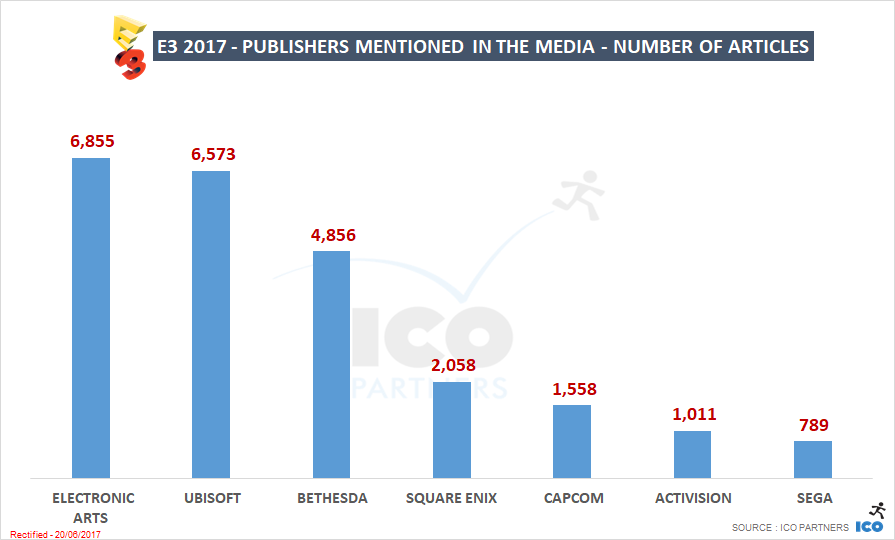 All 3 companies with a press event did far better than all the others which didn't. Bethesda and EA both had significantly less coverage than last year though (-25% for EA; -15% for Bethesda). And to nail down Ubisoft's stellar performance this year, you can look at the progression over the past two years: 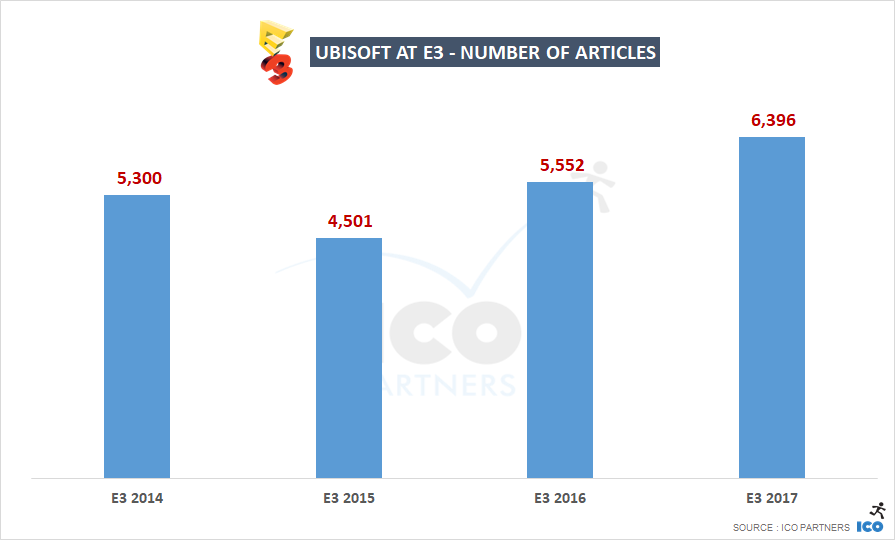 No short selection of games for this year's case studies. Instead, I looked at how 2 games' coverage evolved year-on-year, and how two games from Klei compared to each other a year apart. 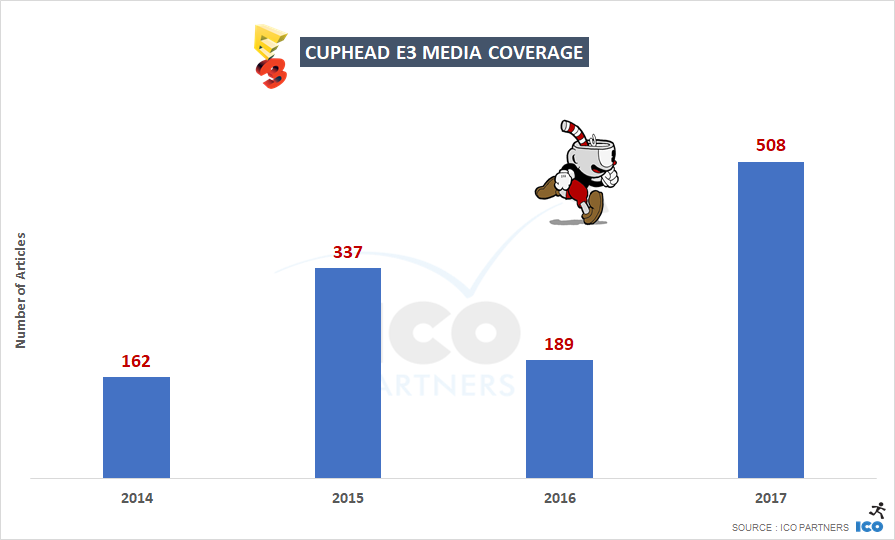 After its 4th year being featured at E3, Cuphead is finally going to be released. This illustrates quite nicely how much having a release date helps you coverage-wise. At this point, the game has been covered a lot over the years. The fatigue shows through the numbers at E3 2016, so the 2017 numbers overall indicate a very good performance for a game of that profile. 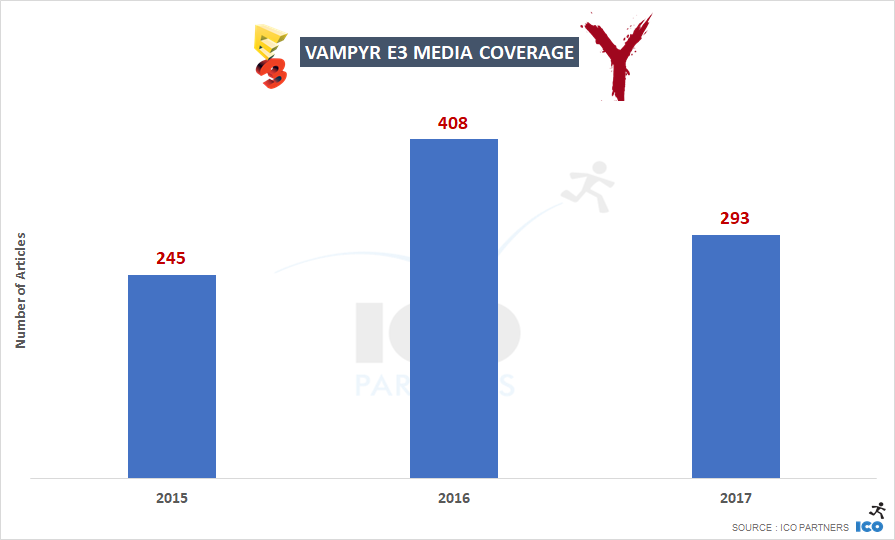 In its third year at E3, the Dontnod title coverage illustrates a few interesting points: 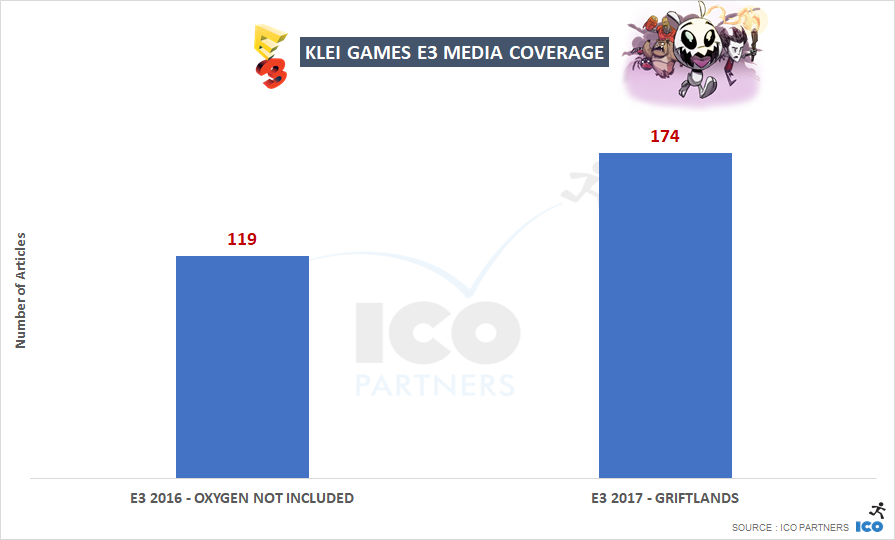 These projects by Klei are very interesting to compare: they were both revealed at the PC Gaming Show. It is very difficult to get comparable data over time, but this is quite interesting - two games by the same developer, announced at the same conference at E3.

I haven't shared data over the PC Gaming Show in the past, and it is mostly because the branding is not as strong and many announcements get relayed without mentioning the event. The fact that a games media outlet is attached to the event as the organizer might play a significant part too. Anyhow, there is evidence of growth in coverage for games featured at this event, and Klei's games illustrate this quite nicely.

I have always felt a bit conflicted about titling these articles "Who won E3?" as there is much more to the data than that. However, this year's E3 is a bit of an exception. The announcements made, the reaction of the media to them, the progress of the media coverage over the past few years; all of this make me want to declare two, very complementary "winners".

Nintendo - as they come back into the spotlight and significantly increase their media presence, this has certainly been the best E3 in years for them.

Ubisoft - with their numerous announcements, the way they were orchestrated, and the stellar execution of the Beyond Good and Evil 2 trailer release, all explain how they ended up as the leading publisher of this E3 in terms of coverage.

And I want to think that the two companies' partnership also played a big role, and is probably not a coincidence considering the position they both have at present in the industry, and their respective challenges.

Why Nintendo and not the Wii?

In the graphs on consoles over the past 3 years, I am comparing the PlayStation and Xbox brands to Nintendo. The fact is that the other consoles have consistent brands whereas Nintendo machines areÂÂÂ using multipleÂÂÂ brands. Moreover, Sony and Microsoft are two companies with activities spread across multiple industries and cannot fairly be compared to Nintendo, when we look at articles on games. Nintendo is also a strong publisher, and its brand is more established than one of its consoles, compared to Sony and Microsoft. Comparing platforms to brands is the best way to have comparable results to look at the Nintendo brand, rather than the Wii for instance (or even a combination of the Nintendo consoles).

What is the reach value?

* Like last year, I am referring a few times toÂÂÂ the notion of reach. Here is a reminder about it:


The following graph requires some pre-explanation.ÂÂÂ In order to measure the magnitude of an article, with haveÂÂÂ created a formula based on the websites’ Alexa ranking to give their articles different “weight”. The more popular the website, the more weight we give to their article. This value is called Reach in our tools and range from 0.1 to 10. For example, currently, Eurogamer.net has a reach of 10, Gamasutra.com has a reach of 8, Road to VRÂÂÂ has a reachÂÂÂ of 6. So what you see below,ÂÂÂ is a chart of the total reach of all the articles showedÂÂÂ above. We refresh the reach values constantly.