4gency's founder looks back at a first year of lessons as a mobile/tablet developer. Lesson one shows how hard it can be to make money in the arcade genre with in-app purchases.
Charles Cox
Blogger
May 18, 2013

This is Part One of a series of posts about 4gency’s first year in operation, including data on monetization, app marketing campaigns, and user acquisition. If you’re interested in learning more, contact [email protected].

This article was originally posted at 4gency.com. 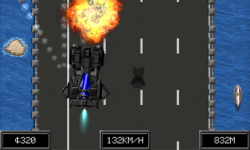 It’s been a heck of a first year in operation. With two games, four platforms, three monetization models, over 60,000 users and almost a quarter-million gaming sessions logged, we’re glad to still be in one piece. Seriously, it’s tough out there. We’ve got two games to talk about – let’s start with the second one first; with only one platform and form factor (iPhone), it’s a simpler study.

Buckle up, and we’ll dig into the whole story.

Armored Drive is a spy-car themed endless racer. Players use tilt controls on their phone to move their car left and right on the road, and touch controls to deploy weapons and gadgets to knock out other cars and get rewards. Distance and combat prowess reward the player with coins, an in-game currency, used to purchase more ammunition, gadgets, car upgrades and more. Elbert Perez, who developed the original Windows Phone game using a free-with-ads model, gave 4gency the opportunity to take the game to iPhone, going to not only a new platform, but a new revenue model as we implemented in-app purchases (IAP) in hopes of more deeply monetizing the game.

We felt Armored Drive was a good candidate for IAP. An endless racer with similar traits to Jetpack Joyride, Armored Drive had upgrades to weapons, gadgets, and car appearance that would attract a variety of players. A system of ranks and challenges brought players back in and encouraged repeat plays and investment in buying more ammo and upgrades. We felt that we could implement IAP in a reasonable, non-annoying way by using real currency only as a way to more quickly attain in-game currency. By playing the game, a player could get kills, distance, and rank up for good coin rewards without having to ever buy the consumable IAP coin packs or durable IAP “coin doubler” we offered in the real-money marketplace. 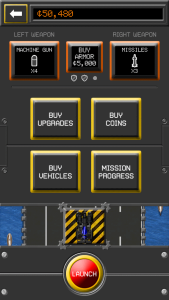 There was no “end” to the game, per se – iOS leaderboards were set up to sort on maximum distance in a single run, so an expression of superiority was not simply an aggregate number of times played, but rather how effectively a player could use their tools and skills in a single effort. Designs for “in-session” drops of additional gear were considered, as a way of extending run length per session, but had to be shelved for lack of time.

Initial designs had Armored Drive being free from Day 1. However, a Monte Carlo-style simulation run between an IAP-only and a paid-with-IAP pricing model showed paid as the probabilistic winner in a higher percentage of scenarios. I used a modified Hubbard Research model, as described in the book “How to Measure Anything” and available in Excel form on the Hubbard Research site. 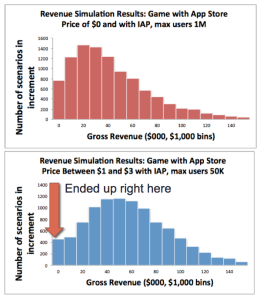 And – though we didn’t know it at the time – going paid first meant we could deploy a free promotion later to take advantage of the anchoring effect, an event that we later found drove over 15,000 users to our game virally, thanks to the network of twitterbots scouring the App Store. In the end, the prediction made by the Monte Carlo simulation turned out to be right, if overoptimistic about the number of users that would find and convert on our game.

We staged our release through a free, quiet pre-release period in Canada, Russia, and China to try out the IAP and determine depth of spend. In the test environment, we ended up with 400 downloads and $1 in revenue, so roughly one-quarter of a cent DARPU. It was discouraging at best. Regardless of how many downloads we got, the percentage of conversions was so low we’d be assured almost no return. It was at that point that we ratified going with the paid model. It wouldn’t be for several months until we saw the Big Data trend that showed us why we had very little chance of monetizing our game.

In the end, Armored Drive went through four versions, bounced between free and paid four times, and acquired about 20,000 total users. As this was a bootstrapped effort, we had no major marketing partners and worked through our own media channels to try to drive exposure and engagement in the game. 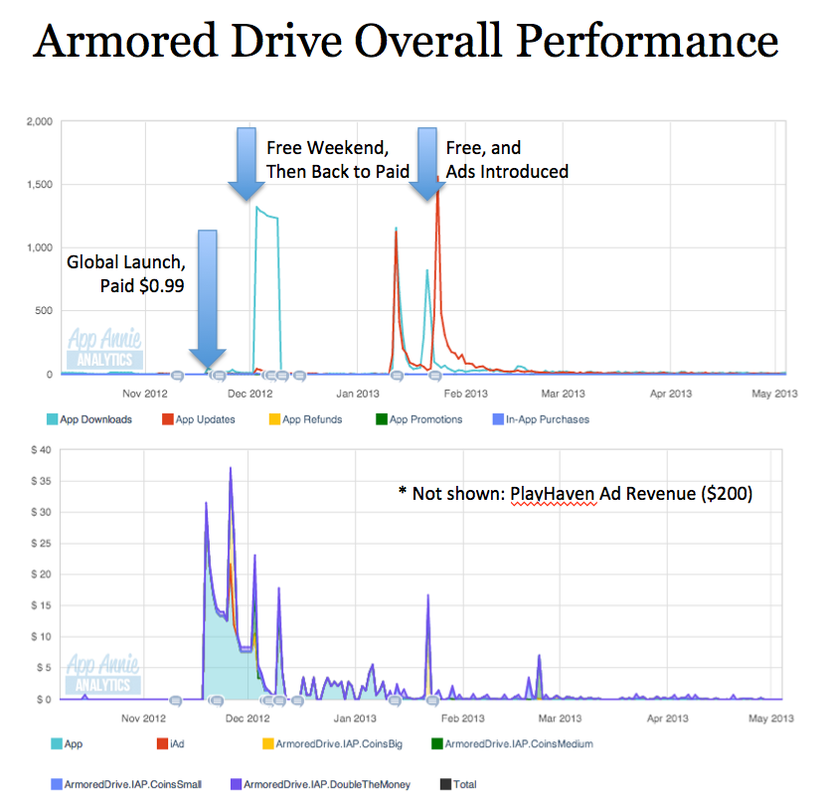 What Worked, What Didn’t

Armored Drive was heavily instrumented to send back metrics ; we got a good idea of how we were stacking up in a variety of ways:

The following campaigns chart outlines how each move made to the monetization and acquisition strategy landed with our user base. Important questions are marked in red – these are the numbers that surprised or frightened us.

Our minds were full with the most critical question: why was monetization so low? It was only a few months ago that a potential answer came up, from Apsalar: while games of the “Arcade” genre have high engagement (as we did), they have disastrously low monetization. Many will come, few will pay: 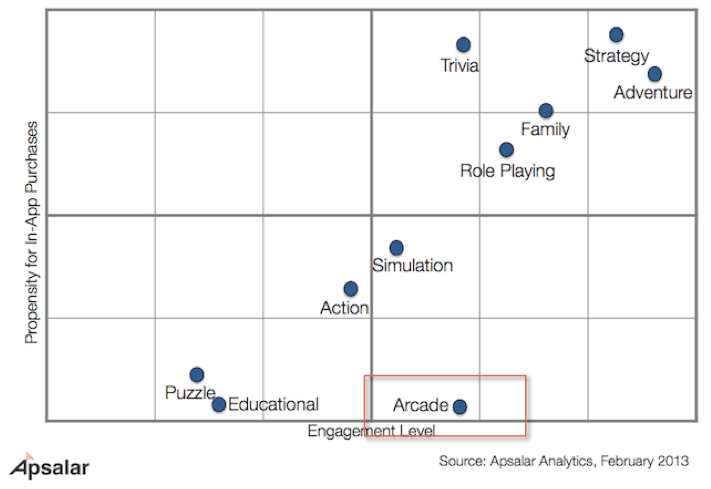 In the end, Armored Drive on iOS had a number of issues that kept it from overarching success, and stand as lessons we’ll use to better target and execute our next titles:

Over 125,000 sessions of Armored Drive have been played worldwide; roughly 6,000 hours of gameplay. We are proud to have brought the game onto a new platform, to a new group of players. While the game’s success suffered the familiar problems of discoverability and the less-known issue of genre-specific monetization, it is gratifying to know the game is out there for players to enjoy.

If you’re interested in learning more about our experiences with Armored Drive, contact [email protected]. You can also download the iOS version or the original Windows Phone version of the game.