A vivisection of Plague Inc: The Board Game's sales data and commercial performance

I’m the creator of Plague Inc. (and Rebel Inc.) Here is some data from the first few years of selling Plague Inc: The Board Game, the physical adaptation of the digital game, in case it helps future designers inform their decisions.
James Vaughan
Blogger
April 29, 2019

James here, the creator of Plague Inc. and Rebel Inc.. Today I wanted to share some data from the first few years of selling Plague Inc: The Board Game in case it helps future designers inform their decisions (especially if you are considering adapting a digital game into a physical tabletop product).

When I decided I wanted to make a board game I found it really hard to find good sales data about the number of copies a reasonably successful board game might sell.

Talking with lots of publishers and people in the industry revealed a rough rule of thumb for selling copies of board games:

I’m pleased to say that Plague Inc: The Board Game has been a ‘success’, but has some way to go before it is a ‘huge success’.

Stock levels and estimating demand:
One thing we have really struggled with is estimating stock levels. Every year so far - we have run out of stock over Christmas which is always very frustrating. 2017 - we lost 2-4k of sales as we ran out of stock, 2018 - 500-1k as we didn’t have enough in Amazon warehouses after the 19th December.
Still, it is a problem of success - and hoping to do better this year! (and yes - Christmas sales are really, really important!)

Below is a graph of our stock levels over time. You can see where stock comes in / goes out to distributors as well as the Christmas sales. Also - the shameful points where we ran out of stock entirely! 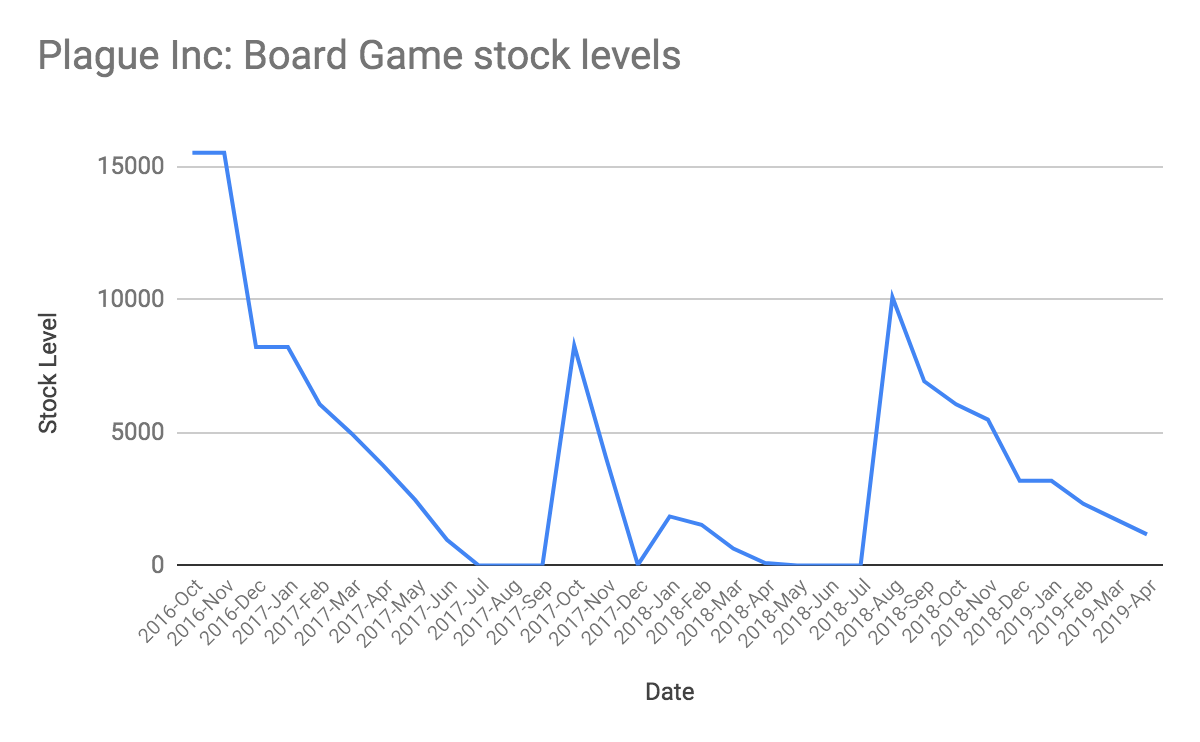 Should you make board games to make money?
No. The market is extremely competitive and having a good game is nowhere near enough to succeed. If it wasn’t for the power of Plague Inc. we would not have sold a fraction of the units.

Why do you not use distributors in the US?
We tried it in the past and might try again in the future. However, we have the ability to send potential customers directly to Amazon (we control the marketing through the digital game)  and almost all copies are sold on Amazon. When selling to distributors, we found it didn’t really increase exposure or volume. All it did was undercut the existing game on Amazon.

How hard is it to handle all the design, manufacturing, distribution and sales in house?
It is hard but I quite like doing it and find it rewarding. It’s a palate cleanser / something different from making video games. It does require several different skillsets though and a way to interact with potential customers directly.

How does it compare making board games with making video games?
Making both is really fun and really hard in very different ways. That is why I like doing both. That said, from a hard nosed business point of view - I should probably only do video games as the market is much bigger! (I always find it amusing how different the numbers are - 120 million digital players vs 35k board game players.) I really love having a physical product on my desk and something I can play with friends around a table - a nice contrast with our digital stuff and I think they really complement each other.

Are you going to make a Rebel Inc. board game?
I would love to but no immediate plans - lots of other things I need to work on!

Hope you found this interesting / useful!

P.S. If you are a talented and experienced strategy/simulation games designer (board games or video games) - get in touch. I’m always looking for good people.

P.P.S You can see the previous blog posts about the board game here, and here.