... and then it rained – a bitter-sweet success story

May 1st we released our first game “... and then it rained” for iOS. The following month was a big but bitter-sweet success story with some hard but valuable insights on the way.
Daniel Helbig
Blogger
June 04, 2014

May 1st we released our first game “... and then it rained” for iOS. Knowing that most indie game productions fail from a commercial point of view – even very good ones – and that for every success there are probably a few hundred games, which never make it to the top, we were already prepared to share that fate. Lucky us we made our peace with that long before we actually started to work on the game.

Megagon Industries consists of a bunch of game industry freelancers who all have their own business and customers, and – being burned by a few previously released games in different constellations – we never actually planned to make a living from the games we make. This independence allows us to make very unique games for a very small audience (mainly ourselves) and also take as much time as we need to polish them till it hurts.

“... and then it rained” was therefor never aimed to be a commercial success. It is the first game I have ever programmed and in the beginning it was primarily meant to be a learning experience. But as the positive feedback for the game became more and more enthusiastic it somehow evolved into an eight month long serious production.

Having the luxury to not rely on App Store incomings also allowed us to stay completely ignorant to the current app market business situation and so we decided to make a premium app (tier 2) with no InApp purchases or ads. Just pay and play.

We managed to keep our expectations and stress level fairly low during the whole production until a few weeks before release when we got the chance to show the game directly to Apple and got very positive feedback. An App Store feature was now suddenly within the range of possibility but being grumpy Germans (the glass is always half empty… and dirty… and probably filled with poison… ) we were still very skeptical about a possible commercial success.

One of the main reasons for our skepticism was that we absolutely lacked press contacts. We knew not a single person from the hundred people on our press list, which received a promo code the day before release and we knew that neither of them had ever heard of Megagon Industries before.

So when May 1st finally arrived we were prepared for the worst.

We got a small Apple feature in the new & noteworthy category and a small banner and not only did the game sell well, we also got amazing reviews from a lot of big blogs and magazines. People who had obviously deleted our release mail suddenly asked us for promo codes. The German indie community was also an amazing support and the first week we were all over Twitter and Facebook. It really felt like we hit the indie game jackpot.

We knew that most mobile games make 90% of their sales during the first week but when Apple added us to the “Our Favorite Games” section in the beginning of the second week and sales were still strong at around 1000 units per day, we really thought that we might be the exception from the rule. No matter how experienced and hardened you are, the dream of making a living through your own games is always lurking in the dark shadows of every indie game developer’s mind and we slowly started to believe in that dream again. We started to hope that the game might continue to sell well enough for a longer time to provide some kind of financial baseline for us.

We couldn’t be more wrong! Four weeks after release IndieCade announced us as part of their E3 Showcases. We sold 27 units that day…

And this was only the latest disappointment in a series of “this is absolutely amazing but doesn’t make you sell one more unit” events. Here is a short list of all the fantastic things happening to us over the last month: 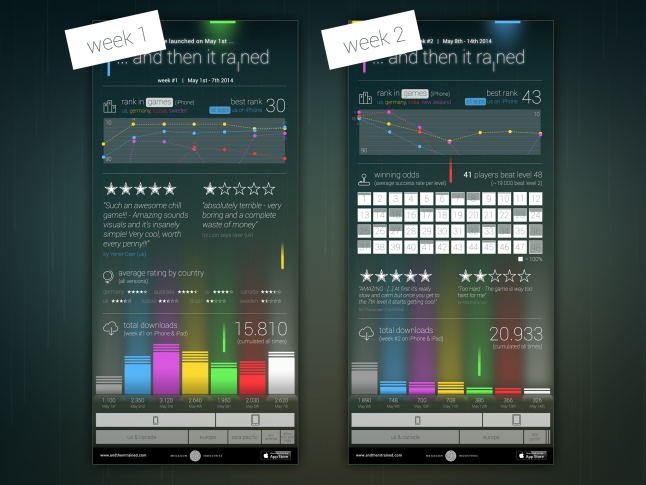 Each one of these events was absolutely fantastic and really boosted our developers pride but to our astonishment they didn’t affect our sales at all.

This leads us to some disappointing insights:

We focused this postmortem mainly on the negative sides of the success because we feel that these are the areas where we learned most (especially about ourselves) and can share the most valuable insight but that doesn’t mean that the game isn’t a large personal success for us. In times it even felt like a personal  “Indie Game: The Movie” experience.

We got so many support mails by gamers and especially by fellow developers that it really overwhelmed us. Because of the game and thanks to IndieCade we now also have the special opportunity to exhibit the game at the E3, which is something we would never thought possible a few weeks ago.

The success during the last month also strongly motivates us to keep working on the game and on ourselves: We began to look into porting the game to other platforms and this article and the upcoming E3 are our humble start to reach out to the international community. We will also keep updating the game to make it even better over the next year and we started to have a closer look into the whole ASO thing as we never really cared about that before. We are also working on the next game based on an idea, which might be stickier than “… and then it rained”.

But we are now also aware of the limits of what we can achieve as a studio at this very moment and that we will have to continue to make games the way we did before. This means working half our time as freelancers and only using the remaining free time to develop our own games.

And as much as we want to we also can’t shake off this lingering bitter taste because for a moment it seemed like this whole indie thing could work but then the dream crawled back into the shadows.