This week's roundup includes pieces on Disco Elysium & Pistol Whip, as well as articles or videos on the science of addiction, Japanese arcades, cryptography in Mario Maker 2, and lots more besides.
Simon Carless
Blogger
November 10, 2019 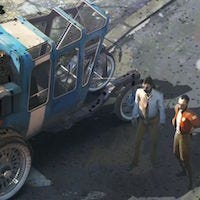 This week's roundup includes pieces on notable recent titles including Disco Elysium & Pistol Whip, as well as articles or videos on the science of addiction, Japanese arcades, cryptography in Mario Maker 2, and lots more besides.

Hope you enjoy the latest roundups - stay tuned for lots more in approximately 7 of your Earth days.

The role of posters in video game worldbuilding (Ewan Wilson / The Face - ARTICLE)
"Remedy Entertainment’s new action-adventure game Control is all about confronting a world considerably larger than we first imagined. Central to this idea is the image of the room and the poster. Referencing the 1995 film The Shawshank Redemption – where behind the pin-up on his prison cell wall, Andy Dufresne slowly chisels a hole to the outside world – the poster in Control is a gateway to a more expansive universe."

Evolution of arcade games in Japan, the penny arcade nation (Game Chronicle / ANA / YouTube - VIDEO)
"In this feature, we cover four eras of Japanese games (1980s, 1990s, 2000s, 2010s) and 100 topics — including hardware and software evolution, arcade games, latest e-sports, and Japan’s longtime favorite traditional games. [SIMON'S NOTE: this is an arcade-specific part of a neat microsite promoting Japanese games with other interviews that are hosted on ANA's YouTube channel.]

Why the Creator of Disco Elysium Hasn’t Read the Reviews, and What’s Next for the IP (Samantha Nelson / The Escapist - ARTICLE)
"The members of the small Estonian studio are all high school dropouts who had no prior game development experience before working on Disco Elysium. Kurvitz, who is 35, said they spent most of their youth smoking cigarettes, wandering the gray Eastern European architecture, and playing Dungeons & Dragons."

Publishers are dictating what esports will be (Michael Cohen / Torte De Lini - ARTICLE)
"As more esports titles become largely dictated by their publishers, the fewer opportunities there are for tournament organizers to create events. Tournament organizers not only compete with one another for calendar dates and territorial positioning but they also compete for esports titles."

When the Fun Stops: The Science of Addiction (Andrew Przybylski / GDC / YouTube - VIDEO)
"In this 2019 GDC session, Oxford University's Andrew Przybylski explains why the American Psychiatric Association (APA) and the World Health Organization (WHO) have called for studies investigating video game addiction, and what developers can do to help promote healthy play."

Nintendo boss Bowser on Switch Lite sales, 3DS support, and tiny retro consoles (Andrew Webster / The Verge - ARTICLE)
"Meanwhile, during Nintendo’s most recent earnings report, the company revealed that 43 percent of Switch Lite owners were buying the device as a second system. That’s an important part of Nintendo’s stated goal of having multiple Switches in family homes, but Bowser also looks at it from a different perspective."

Horace's incredible journey (Martin Robinson / Eurogamer - ARTICLE)
"Where to start with a game like Horace? Maybe with how it's one of the year's finest games, and definitely its most overlooked. A sprawling, cinematic and ever-inventive 2D platformer - and puzzle game, and old-school arcade racer, and pixelart first-person shooter and about half a dozen other things it morphs into over its 20-hour running time - it's a lyrical flight of fancy that could only ever, really, have been made in the industrial town of Sittingbourne, Kent..."

The Healing Power of Making Video Games Like ‘Minecraft’ (Keith Stuart / OneZero - ARTICLE)
"The mainstream industry, with its vast teams and gigantic, noisy, and explosive blockbusters, appears a universe away from personal expression. At the same time, the actual process of making a game — the numbing hours of coding, the complex mathematics — seems anathematic to soul searching. But is it?"

Riot's Runeterra Declares War Against Blizzard's Hearthstone (Various / Deconstructor Of Fun - ARTICLE)
"Purposefully capping monetisation to appeal to a small and vocal minority is either a good idea - or a really bad one. The risk is that millions of Riot’s players will spend more time on Runeterra and less time on League of Legends, resulting in decline of revenues due to poor monetisation of the game. [SIMON'S NOTE: of course, more of a monetization-centric view on this, but intriguing nonetheless.]"

Death Stranding: The Kotaku Video Review (by Tim Rogers) (Kotaku / YouTube - VIDEO)
"I reviewed Death Stranding. How do you review a game with 900 trailers? Well, you make a one-hour video with three nested intros, you don't talk about the gameplay until about twelve minutes in, and you mostly use footage from the game's 900 trailers throughout. [SIMON'S NOTE: Top quote from the video: '"With Death Stranding, Hideo Kojima has finally made a game that is like eating 60 pounds of vegetables at gunpoint."']

Ray tracing is the next generation of graphics. See the difference. (Gene Park / Washington Post - ARTICLE)
"In simplest terms, ray tracing is a computer’s graphical simulation of how light works in the real world. Complex algorithms would re-create how a beam of light would act, creating color that bounces and reflects off other objects, creating more realistic shadows and reflections."

Call of Duty: Modern Warfare Is a Brutal and Disconcerting Portrayal of Combat (Reid McCarter / EGM - ARTICLE)
"Where past Call of Duty games have incorporated civilians into their levels only sporadically—the airport massacre of Modern Warfare 2’s “No Russian”; the fleeing Lagosians in Advanced Warfare’s highway shootout; the rescued child evacuated from a German warzone in Call of Duty: WWII—the new Modern Warfare is notable for its insistence on showing, with remarkable brutality, how war devastates ordinary people in just about every one of its levels."

Pistol Whip review: The year’s freshest VR game—and oh-so close to greatness (Sam Machkovech / Ars Technica - ARTICLE)
"Pistol Whip... both evokes the simple genius of Beat Saber yet actually delivers on that rare combination of familiar and fresh. Its single-sentence pitch is just as fun: pretend you're John Wick and get into gun-fu battles against hypercolor hitmen to the rhythm of thudding techno. [SIMON'S NOTE: also see this Tested.com review.]"

'Mario Maker 2' Creators Are Using Cryptography to Make Impossible Levels (Patrick Klepek / VICE - ARTICLE)
"The underlying mechanics driving Longest Passcode Level are complicated, but the player’s task is not. You enter the stage with a spike helmet, and walk through row after row of blocks. Some blocks, when hit, contribute to the passcode. Most blocks, howvever, do not."

Playing piano with a sledgehammer: creating Death Stranding's unidentifiable score (Aron Garst / The Verge - ARTICLE)
"Kojima wanted more than the sounds of chains banging against floors and walls sprinkled throughout the score. He wanted unique sounds that felt familiar and real. That led to the trip to Home Depot and the three-day recording session, something Corelitz was brought on to help coordinate and run. While Forssell and Corelitz had an idea of what they wanted, much of the recording session involved experimentation; putting different objects together to see what kind of noise they would make."

BYG TV Clark Tank: ROI in Indie Games, Steam Top 50, and Disco Elysium! (Brace Yourself Games / YouTube - VIDEO)
"Every third Friday at 1pm Pacific time we stay on top of the latest game industry trends by examining the Steam top 50, scrutinizing the latest Kickstarted games, and by playing the most prominent recent releases."

Monster Hunter World: Iceborne Postmortem: The Making of the Expansion and the Future of the Series (Kat Bailey / Eurogamer - ARTICLE)
"Online games don't have the greatest track record in 2019. Ghost Recon Breakpoint was a bust; Anthem was a disaster, and Fallout 76's new subscription plan wiped out a year's worth of accrued goodwill in less than a day. That makes Monster Hunter World: Iceborne a pleasant surprise—an expansion met with almost universal praise."

How Magic: The Gathering card sets are designed (Alex Wiltshire / RockPaperShotgun - ARTICLE)
"Eldraine is product of a remarkable design machine which somehow spits out a similar set of new cards every three months, so I asked Rosewater how it works. “Later this year, I’ll celebrate my 24th anniversary working here at Wizards on Magic,” he says. “People always ask, ‘Don’t you get bored? How can you do the same thing for 24 years?’ And I’m like, well, every set is almost its own game.”"

A Knight In Shining Armor – Swen Vincke Talks The Long Road Of Larian Studios (Daniel Tack / USGamer - ARTICLE)
"Swen Vincke wasn’t always on top. From basic beginnings and a scrappy, dark path through the often tumultuous games industry, the founder of Larian Studios has gone from sneaking into trade shows to helming one of the most anticipated RPGs of all time with Baldur’s Gate 3."