SEARCH
A minimum of 3 characters are required to be typed in the search bar in order to perform a search.
Audio
4 min read
article

I've worked in games and entertainment for years, but in the back of my mind I always envied indie projects. This year, I finally stopped thinking about it and jumped in to TOJam #4.
Neil Gower
Blogger
June 03, 2009

To be honest, the decision to participate in TOJam this year was a bit random. I was catching up with a friend over a pint and a burger, talking about prospects for future gigs and so on. Somewhere along the way it came up that Toronto's indie game jam was happening in a couple of weeks. Shortly before, we had been talking about Google's recent announcement of their O3D plug-in. One thing led to another and the next thing I knew, things had spiralled out of control and I was signed up to make a game using the world's newest web-3D solution.

I am a firm believer in the idea that quality of coding time is much more important than quantity, having tried all-nighters many times when I was a naive university student. 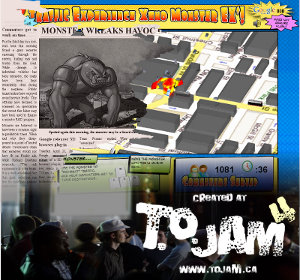 Although this meant missing out on the survival aspects of camping out at the venue, I think the 10-10 schedule was a good call. I packed up my laptop, and to keep time lost to food runs to a minimum, a cooler with sandwiches, snacks, and a couple of "work sized" beers (isn't that what the 330 mL cans are for?) and set out for a weekend of game building sprints.

The participants at TOJam #4 had all kinds of different backgrounds: students from local game college programs, hobbyists, industry hopefuls, and a few insiders. Everyone I met was very cool, and the lack of pretentiousness was great for the creative atmosphere.

Fast forwarding to the end, we came up a bit short on the gameplay (okay, there wasn't any to speak of) thanks to having to build all of the game systems from scratch in Javascript. It was a good reminder of  how many features you take for granted in a finished game engine. Regardless, we ended up with a pretty good tech demo that included:

From the technology perspective, our project was a success and an amazing learning experience.  I wrote more code in that three days than in all of my spare time over the past several years, and learned more than might be healthy about the state of the art in client-side web development. I wanted to spend more time on shaders, but there was just too much game stuff to get through before we could start worrying about good looks. Thankfully the artists made some slick web bits to put around the 3D to spruce it up. Shaders are definitely an area I want to spend time on in my next O3D project.

Next year, I'm going to go in with established tech so that we can focus on game building rather than engine building. Not because I think this strategy will help us win - jamming is about creating rather than competing - but because the best part of the jam happens at the end. The hours after the building frenzy are over provide a rare opportunity to share game ideas with people who are genuinely interested in what you've built, and have the kinds of skills and knowledge that generate concrete ideas you can actually use.

If you're already enchanted with game making, you've probably already got plans to attend an event like TOJam. On the other hand, if the magic is wearing off, perhaps you're a frustrated hobbyist or a jaded pro, a game jam might be just the thing to reinspire you. It's not all tower defence clones, game jamming gets back to the roots of game making - making a game with a few friends just because you can. So stop thinking about it and just jump in! I'm glad I did.