SCOTT PETERSEN AND Matt Uelmen rooted through stacks of CD-ROMs. Each disc was filled to capacity with yells, screams, groans, moans, thuds, grunts, slices, cracks, smacks, scrapes, scratches. They had thousands of sounds at their disposal, but when nothing pre-recorded would do, they turned to instruments and technology: drums, guitars, synthesizers, and computers loaded with cutting-edge recording and mixing software.

In this case, nothing they had on hand would do. They walked to the supermarket down the street and loaded shopping carts with melons and vegetables. Back at the office, they wrapped produce in saran wrap, turned on their microphones, and destroyed their groceries. The meaty yet hollow sound of a watermelon exploding was, in Scott's mind, exactly how a zombie skull would sound as it was caved in.


It's more like a movie set where you need to create the entire sound environment instead of letting it follow naturally from the world's architecture. You need to place each sound where you want it to be heard. -Jon Stone, programmer, Diablo II

"That was the basis for almost all of the melee damage sounds for Diablo II. It was a blast. You just find yourself getting maniacal because the process of recording is a lot like a performance. You try to get the right sound out of the object. That's sort of a musical experience whether it's a drum, or a chunk of wood, or you're hacking and slashing on a turkey carcass, which is one of the things we had—you just try and put your best effort into it so you get the best recording out of it. It was kind of intense there for a little while."

A programmer able to carry—or at least code—a tune, Jonathan Stone rounded out Matt's audio team. Matt and Scott served as Diablo II's dedicated sound designers, creating the effects and tracks that would punctuate the player's journey through Diablo II. Jon's task was to layer those sounds into an aural environment.

"It's more like a movie set where you need to create the entire sound environment instead of letting it follow naturally from the world's architecture," Jon explained. "You need to place each sound where you want it to be heard."

The original Diablo served as Jon's inspiration as well as his impetus for improvement. He admired what Uelmen had done in the first game, but noted—and Uelmen tended to agree—that the game lacked aural variety in each scene. There were six main tracks: the title theme, Tristram's motif, and a track for each of the four dungeon environments. Jon, Scott, and Matt were united in wanting to deepen those arrangements and diversify sound effects. For instance, in Diablo II, the smack of a Fallen's club against a hero wearing leather armor sounds different than if that same club strikes a hero wearing chainmail.

"That was something we talked about quite a bit," Jon explained. "Little sonic layers that could reinforce the reality of the objects in the world. A lot of time was spent in crafting small details like that. While any particular one didn't have a dramatic effect on the game, when taken together, I think they really made Diablo II sound much richer than Diablo."

"It goes back to that whole idea of being as clear as possible," Scott explained. "I was obsessed with getting the right sound for the right moment." He fixated on one effect in particular, the telltale ding of a gem falling from a defeated enemy. He created the sound by purchasing dozens of wine glasses and tapping objects against them until he hit on just the right note.

The result of creating homemade sound effects by combining everyday items is known as Foley, named after sound artist Jack Foley's technique of creating sounds from everyday objects and matching them to film. When Foley wasn't needed, Scott would comb through archives of pre-recorded effects. "I took it upon myself to really work on the combat system defining how an arrow sounds when it impacts and does damage to a creature versus when it ricochets, or glances, or doesn't do damage, and just applying that system to all the different character classes for all the melee, and doing that for all the spells, et cetera."

Despite the resources at the bosses' fingertips, North's recording environment was primitive. Foley was recorded in a closet-sized room. Scott didn't mind. Tight resources forced him to get creative. Modern 3D games can tie the sound of characters taking footsteps to that character's movement animations and the environment they're walking on, such as metal plates, soft grass, or dead leaves. Diablo II offered no simple way to link audio to visual cues, leaving North's team to improvise by creating a loop of footsteps that played according to a set rhythm. They tweaked the loop over and over, playing the game until the footsteps matched each character's movements.

"Jon was responsible for making sure that all that stuff was handled," Scott said. "He did a lot of the initial implementation of those kinds of sounds; syncing sounds to events that happened on-screen and actually adding the sounds to the game."

Eager for feedback, Scott would seek out Erich Schaefer and play a few effects. Erich would nod and go on his way. 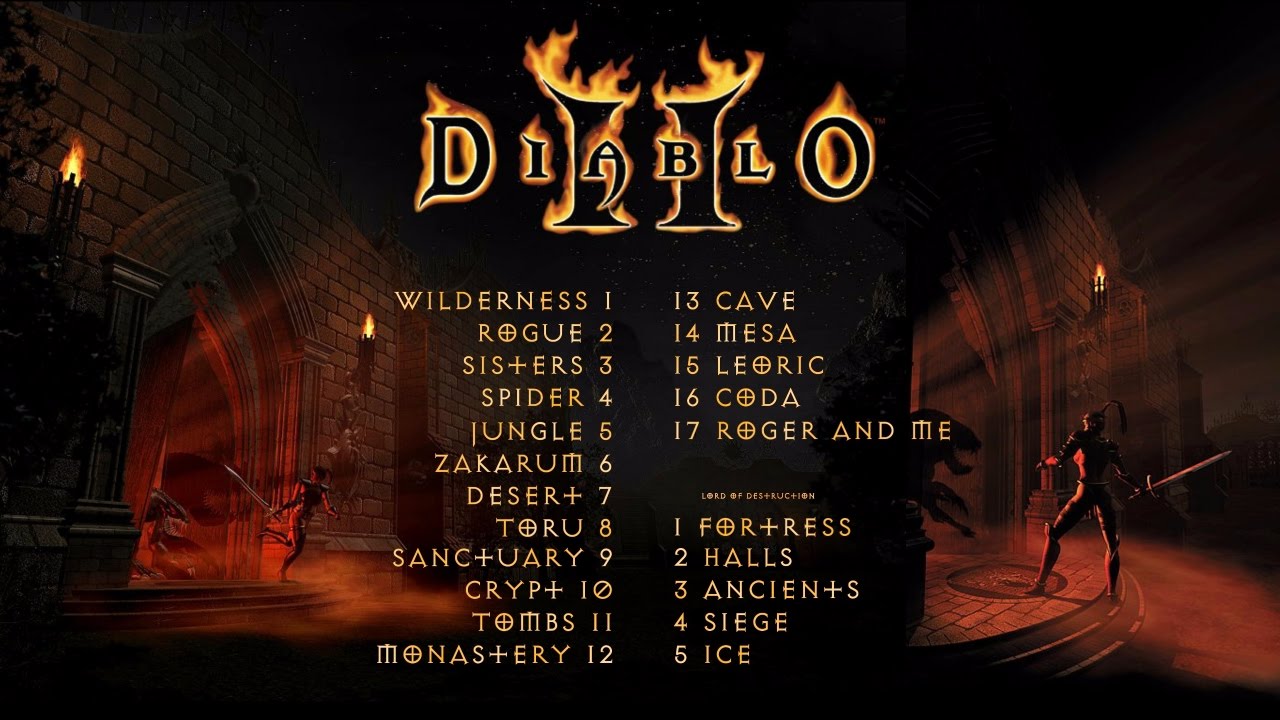 "Unless you put in something that's really, really bad, you just don't hear too much about it," Scott admitted. "People don't have opinions about sound. They have opinions about a color, but not sound. Or they'll have really washy feedback, like, 'Oh, I don't know, that doesn't really sound powerful enough.' At least they have those comments so I can tease out more information from them. Like, 'Oh, what do you mean by that?'"

One of the team's most ambitious and challenging objectives was to create a seamless sonic environment. Since players would be able to go from, say, the Irish countryside down into a cave and back up to the surface without triggering a loading screen, the soundtrack would need to flow from one leitmotif to another without any break in between.

The trick, Jon knew, was that Matt and his collaborators employed wildly different instruments from one track to the next: percussion and Chinese wind gongs for Act Two's Arabian-style town and surrounding deserts; guitars and flutes to remix motifs from the first game; electronic instruments, and more.

"The solution we hit upon was long cross fades between music tracks where the beginning of each track would be all percussion so you wouldn't have a jarring juxtaposition of two keys on top of each other. As the melody from the previous track faded out, the percussion intro of the new track would fade in. That was how we worked around the fact that we couldn't really predict when, exactly, the player would initiate a transition between levels."

With a solution in place, the sound trio did more work to hide the fade from one track to the next. The composers—usually Matt Uelmen—begin each track with five seconds of percussion and then seamlessly flow in the next track. "I can say that I've always felt like I needed the discipline of a project to really grow in terms of my musicianship," Matt Uelmen said. "The transition to Diablo II—where I needed to do an action pastoral track, something vaguely Arabic, something vaguely tropical, et cetera—was a good incentive to explore new sounds."

"As someone who has focused on visuals at Double Fine and Industrial Light & Magic, I have a lot of respect for that part of the experience, but I still feel that sound is what gives games their weight," Jon added. "It gives you the sense that there's gravity in the world, and that the objects you're interacting with are physical and grounded, not just weightless computer renders. It's something that's overlooked, and it may always be overlooked. It's something people usually don't notice when they're playing a great game: The degree to which the sound environment convinces you that the visuals are even better than they are."

David L. Craddock's Stay Awhile and Listen: Book II - Heaven, Hell, and Secret Cow Levels, will be published on Amazon Kindle on December 10, 2019, and is available for pre-order.