A while back, I decided to look up algorithms for predictive firing on the internet, but I couldn't find any that incorporated acceleration in three dimensions, so I decided to give that the old college try.
Kain Shin
Blogger
May 16, 2009

If you just want a function to paste/modify into your codebase, then go here for the Unity C# version:
http://ringofblades.com/Blades/Code/PredictiveAim.cs

Otherwise, feel free to jump to "Attempt #3" if you just want a quick answer to your search that puts you on the path to writing an informed utility function in your math library that you can call your very own.

I just found out that some folks are pointing others to this page as a reference. That is quite awesome! I am honored to have written something useful to the community at large. Feel free to add comments below or send me thoughts on ways to improve this article. Math corrections are also welcome. My favorite comments will be the ones where you tell me what game this helped you make :)

For the record, this is using math taught in high school/early college algebra, geometry, and physics. Teachers may sometimes find themselves faced with skeptical students wondering when they will ever use any of this stuff in real life:

As a product of my education, I have a particular soft spot for math and science teachers. This page is my love letter to all of them.

A while back, I decided to look up algorithms for predictive firing on the internet, but I couldn't find any that incorporated acceleration in three dimensions, so I made an attempt at deriving the algorithm, myself.

This is my story. I hope you like it. 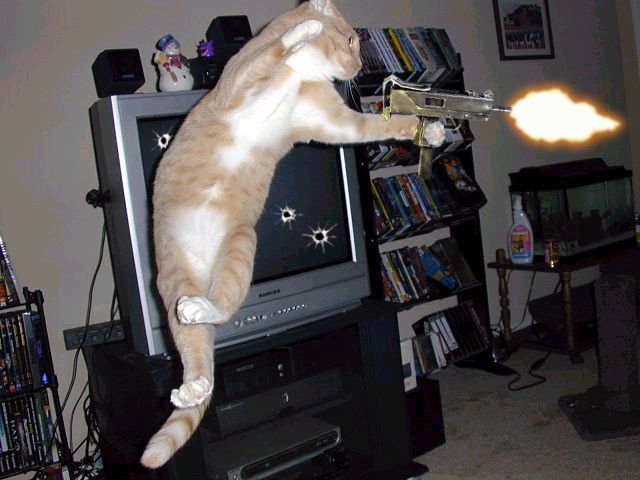 Image Credit: The Internets (possibly from Something Awful's Photoshop Phriday)

Aim a projectile launcher to hit a moving target in n-dimensional space (2d or 3d) with a straight projectile of constant finite speed.

To keep this derivation simple, we can assume the projectile travels in a straight line and is immune to gravity. Once we have the straight line solution, we can modify that solution to support lobbed projectiles.

Find a unitized vector representing the bullet's firing direction. Since we know the bullet's speed as Sb, we can multiply that speed with the unit vector to get the vector that represents the bullet's velocity and direction.

For our purposes, we will combine Sb and this unknown direction into a single variable:

The goal is to find the n-dimensional normalized vector, desiredAimDirection 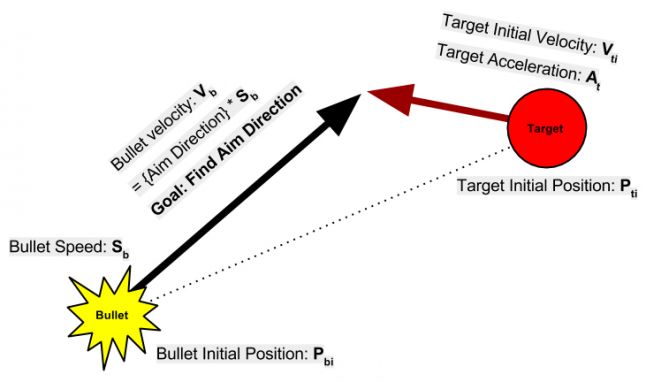 The rest of this page is an illustration of your NPC's sphere of potential influence intercepting the straight line defined by the target's current position and movement.

I am intentionally not including a picture of an arrowed line and sphere here to encourage you to develop/confirm your own neural pathways to instinctively and flexibly form this time-based moving model in your head as a prerequisite for being able to understand how this solution works for any predictive aim scenario... "Open your mind, Quaid! Open your mind!!!"

We are all born with an inherent understanding of physics, which is why we know that the line representing target motion will grow in length over time.

The Kinematic Equations allow us to convert positions, time, and speed into growing lines and spheres. This is the kinematic equation relevant to our purpose:
PositionFinal = PositionInitial + VelocityInitial*time + 0.5*Acceleration*time2

Note that I am using the word "bullet" instead of projectile in order to play nice with acronyms where P unambiguously means "Position" instead of "Projectile", and B means "Bullet". Apologies in advance for the ambiguity between time t and "Target".

The thought journey goes as follows...

Strategy #1 - System of Equations with Acceleration:

There are two unknowns in the above equation: t and Vb.

Vb is a vector of n-dimensional velocity that is the result of the normalized vector of bullet heading times scalar magnitude of bullet speed, Sb.

Since there are two unknowns and only one equation, then one method of solving this is through a system of equations. With two independent equations and two unknowns, we can isolate one of the unknowns (like t) and plug that into the other equation to identify the other unknown (Vb). Knowing the value of Vb and Sb will allow us to determine the normalized vector that defines the desired heading of the muzzle when it shoots.

For the second equation, I specifically wanted to take direction out of the picture when it came to the bullet because I know its speed but not its direction. Without direction, the bullet can be thought of as a growing sphere. Hence, the other equation I used for this method feels like a parametric representation of the bullet as a spherical AoE (Area of Effect) field growing outward per t whose radius would be equivalent to the distance from muzzle to target at the proper value of t. So when t is 0, the radius of that sphere is 0, and when t is righteous, the distance from muzzle to target will intersect in one of two places... since lines are able to intersect spheres in two places.

Combining the two concepts, I had an equation that looked like this:

Good news: Only one unknown in the above equation. If we isolate the t, then we can plug that t into this known equation:

...in order to isolate Vb, which will lead us to the goal.

Bad news: I did the math (which I'll go into detail with in Attempt#3), but gave up and then decided not to post my formulas in this article because it was uuuuuuugly. The generic solution to the combined equation involving Vector magnitude is technically doable, but an isolated t in terms of all those variables would end up being hairy to the 4th degree because of acceleration, which gives you t4 somewhere in that mix after doing Law of Cosines followed by Quadratic coefficient determination.

I decided to bail on that direction and, instead, went with an iterative Newtonian-like approximation.

If I find the value of t that coincides with perfect impact, then I can find where that impact would occur by plugging into the target's kinematic equation. That future position would be where the muzzle should point at when it fires the projectile.

Think of this as bouncing back and fourth between time, t, and Target Position, Pt which are defined by equations that feed into each other. Bouncing back and fourth gets you closer and closer to convergence as each new Pt gets you a more accurate new t, which gets you a more accurate new Pt after that and so fourth until you feel that your iterated Pt accurately reflects the actual Pt at the future time of impact, t.

A fair first approximation is to assume that the target is not moving. In this case, the value of t is the time it takes for the bullet to travel from muzzle to target's current position.

So now you have t0, which is a decent first guess at the time of impact. Plug that t0 into the target's kinematic equation to find its position when t0 seconds have passed:

Now you have a new position for the target at the supposed moment of impact, time to calculate a new t with that new position.

Now you have a new time, t1. t1 is better than t0 because it took a more accurate position guess into account. If you want, you can go on as many times as you are willing to iterate to get an answer that is "good enough". Be sure to use the original target position Pti, as the kinematic equation is based on the original known position at time t=0.

So the general pattern is...

And the answer you are looking for is...
desiredAimDirection = Normalize( Pt[n] - Pbi);
... to hit that target in t[n] seconds.

Assuming that the speed of the bullet is faster than the speed of the target (imagine a growing Area of Effect), the deltas between successive t and P values will diminish between each iteration. Those t values are mathematically bound to converge asymptotically upon the correct value of t depicting the time that projectile and target need to travel before reaching coinciding positions.

The nice thing about this iteration method is that it can be easier on CPU cycles if you arrange the code to amortize iteration steps across separate cycles as part of your AI CPU-load budgeting methods. One side effect of iteration is that using the value of t from your current step in the next iteration across ticks can make it look like your AI's aim is gradually becoming more accurate for targets that move predictably... as if they were refining their aim while looking at you :)

In the case of a first person shooter, you probably want AIs to aim their missed shots in front of the player target's camera for dramatic effect. This particular algorithm has enemy aim statistically likely to chase the moving target from behind.

Lobbed projectiles are simply projectiles that have downward acceleration on them, assuming gravity goes down in your video game simulation :)

Note that Vb is explicitly NOT Normalized in this solution. If something feels a little off about this, you are correct; we are basically saying that the magnitude of the bullet's initial velocity is affected by the angle of the lob. I will go into more detail on the relationship between gravity and initial bullet velocity after Strategy #3.

The downside of Strategy #2 is that it requires multiple cycles and even then, it is not exact. If you want to do this as a single pass utility function that is mathematically accurate on the first attempt, then we're going to have to revisit the original strategy described in #1.

Acceleration is what makes the Strategy #1 difficult to solve because it throws that t2 into the mix which eventually becomes a t4 when you convert that vector into a scalar magnitude.

The problem of predictive aim is much more solvable if we just drop this whole Acceleration bit.

For completeness sake, here is the derivation of predictive aim direction for a target moving with zero acceleration:

First find t, then you can use that to solve for Vb

Equation 1 can be broken down to isolate t through these simple steps:

You now have two possible values of t.
This can happen when you are intersecting a growing line with a growing sphere.

If t is negative, you can eliminate that value immediately because time-reversing computers will not be available to humans until the year 2942. By then, we will all be dead.

If both values of t are positive, then you may want to pick the smallest one if that is the design you are "shooting" for (get it? shooting? LOL). You basically have a situation where both possibilities will reach their mark (i.e. target is running away from your NPC at a skewed angle from a somewhat slow projectile), but you probably want the NPC to bias towards hitting sooner rather than later... perhaps. The choice is yours.

You can check your math by making sure that...
Length(Vb) == Sb

If your numbers are slightly off, then this may be attributed to floating point precision loss. The best advice I can give you on that is to...

Vb being an n-dimensional vector should get you the direction you need:
desiredAimDirection = Normalize( Vb );


Situations in which there will be no valid solution:

You can detect these non-solution cases with the following tests:

We start with this:
"finalProjectilePosition = f