Fullscreen Exclusive Is A Lie (...sort of)

Fullscreen Exclusive Is A Lie (...sort of) 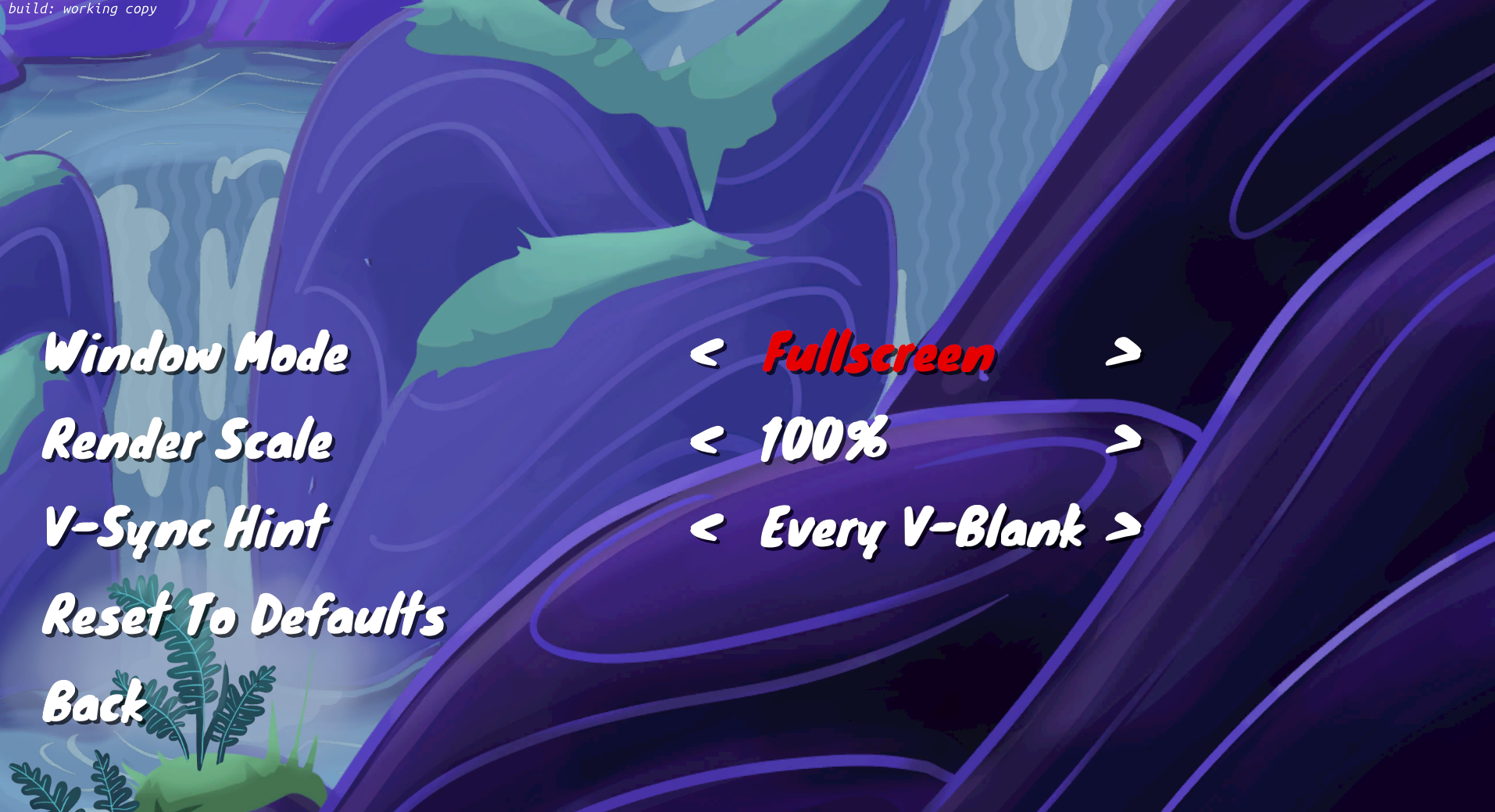 If you're an expert in this topic and believe this post is incorrect in any way, definitely email me or DM me on Twitter and I'll issue a correction!

Today I'm specifically discussing Windows 10. I'm using OpenGL and calling into win32 directly, but these results will likely be of interest regardless of your graphics API and windowing library. I should probably define some terms before we start:

It's also worth noting, most games that have a fullscreen exclusive option will mess with your display's resolution when it's enabled. Whether or not changing your display settings is necessary for exclusivity, it's certainly not sufficient: again, our goal is to bypass the compositor.

A few days ago, I decided that it was time to finish setting up the video options for Way of Rhea. I previously supported the following window modes (or, at least, I thought I did!):

I didn't properly lock the aspect ratio in either of these which could lead to UI and/or game elements being off screen on some setups, so my first goal was to fix that. In doing so, I realized that it's kind of weird that most games only let you choose from a fixed set of resolutions.

Traditionally this made sense–if you're going to mess with the display settings to get the resolution you want, then you can only support resolutions the display supports! However, if you're in borderless window mode which is becoming more and more common, you can set the resolution to anything you want since you're just resizing a framebuffer.

I figured, if fullscreen exclusive support is gonna dictate which resolutions I can support, maybe I should knock that out first. How hard could that be?

Well, you've presumably already seen the title of this post and have a guess at what the answer to that question is. :)

Presumably DirectX has an API for this, but I'm targeting OpenGL.

The internet is full of hearsay about what you need to do to get fullscreen exclusive mode in OpenGL. Some say that you need to apply the WS_POPUP window style, others say you need WS_POPUP | WS_CLIPCHILDREN | WS_CLIPSIBLINGS. Others claim you need to call ChangeDisplaySettings with CDS_FULLSCREEN.

There's a big issue with all of these claims: they're not documented, and there's no obvious way to test if they actually work!

If we're serious about doing things right, we need to find a way to test for fullscreen exclusivity.

I'd love to be wrong about this, but as far as I can tell, Microsoft/NVIDIA/etc do not provide a way to directly check if a window is fullscreen exclusive. If you search around online for ways to test for exclusivity, you'll find more hearsay:

People often check for exclusivity by changing the computer volume via a hot key and observing whether or not the volume overlay shows up on top of the game.

(I'm actually rather curious how they accomplished this, if you know how to do this I'd be interested in hearing from you.)

Another common suggestion is to check whether the Windows key works. I can see why people suggest this as a test–on some of my test machines, fullscreen exclusive windows do obscure the windows menu. However, this is not true on all of them, and if you're testing a game for which you don't control the source it's very likely that the windows key was disabled manually by the game.

If you try this test yourself, you may notice that even on setups for which the windows menu is not obscured, it causes the window to flash black as it loses exclusivity…

The last common suggestion I've seen is to check whether the window/monitor flashes black when it loses focus. In my tests so far, fullscreen exclusive windows will flash when they lose focus, however, there are other potential sources of flashes–ChangeDisplaySettings for example can cause the monitor to flash even if no settings are changed, and many games call it when gaining/losing focus.

I've managed to convince myself that can tell the difference between a flash due to losing exclusivity and a flash with another cause, but it's very subtle and not something I would want to rely on to check whether or not my game is working correctly!

A Test That Works

It's not the classic windows key test–there's a little more to it.

Alright, we've listed a number of methods that don't work. So what do we do?

If we're in fullscreen exclusive mode, we're bypassing the compositor. This means that things like print screen will not behave correctly.

In particular, if you have a fullscreen exclusive window, and you press the print screen shortcut, instead of getting a current screenshot you'll get a screenshot of *the last non-exclusive frame*. Normally this is a nuisance, but today we can take advantage of it!

The test is as follows:

Please note: I can't promise Microsoft won't fix this someday, you'll have to test for yourself whether these results are reproducible on your version of Windows. If you're never able to get an out of date screenshot, it's either been fixed or you haven't tested a truely fullscreen exclusive app yet.

I tested out the various methods of gaining fullscreen exclusivity in OpenGL suggested online on 5 different setups. Here's what I found:

WS_POPUP and DPI Awareness do appear to be necessary for exclusivity, but they're unfortunately not sufficient! On the setup that I expect is most similar to most player's setups (single monitor w/ an NVIDIA GPU) I wasn't able to figure out how to acquire fullscreen exclusivity at all.

Alright, this is kind of a mess! How the heck are other games doing it?

Testing Fullscreen Exclusivity in Other Games


Alright, this is kind of a mess! How the heck are other games doing it?

…well apparently, they're not!

I've tested 6 games so far ranging from well received graphically intensive indie games to larger well received AAA games that you would expect to care about this sort of thing.

I won't name the games as I don't want to criticize them in particular, the issue appears to be universal. Here are the “anonymized” results–I tested on the setup that I found to be the most forgiving in terms of allowing exclusivity:

Of the 6 games tested, not a single one could reliably toggle fullscreen exclusivity. Four of the six never achieved exclusivity on my setup, and the remaining two were always exclusive when fullscreened–even when in borderless window mode.

Of note, this list contains a Unity game, an Unreal game, and four different proprietary engines.

The only thing the fullscreen exclusive option reliably does in the games listed is change your display resolution to match the game–and one of the six (AAA TPS 2020) didn't even do that.

If nobody else has found a way to offer a reliable fullscreen exclusivity toggle, I see little reason to pretend that I offer that mode either!

In addition, since upscaling from a framebuffer seems to have no effect on exclusivity (and no measurable perf effect as compared to changing the monitor resolution), I have no reason to limit the resolutions at which my game can render.

Taking these observations into account, my plan is as follows:

This will give technically adept players options without over promising, and should be less confusing than a large list of resolutions for everyone else.

I am conflicted as to whether or not I should use the WS_POPUP style in borderless window mode–on one hand, with it at least some players will get fullscreen exclusivity, OTOH those players then won't be able to use print screen. I'll likely end up doing what I do with vsync–making a checkbox for it, but labeling it as a “hint” to acknowledge that I as the developer don't actually have the final say as to whether or not the setting has any effect.