The revised guidelines will apply to all forms of advertising for in-game products, although it's noted that in-game storefronts using virtual currency that can be earned in-game as well as purchased are unlikely to be considered advertising (out of scope).

As the table below shows, however, storefronts using virtual currency that's only purchasable using real-world cash are highly likely to be considered advertising (in scope). 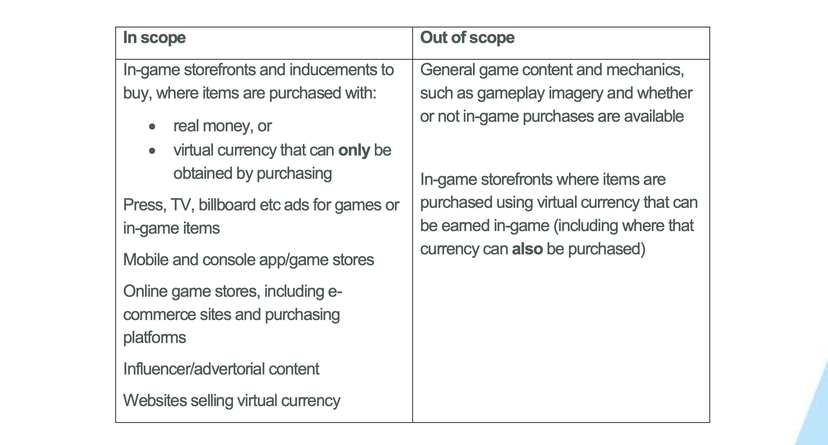 Keeping that context in mind, the ASA explains that games deemed in-scope must make the cost of any transaction crystal clear. "This is particularly important when currency is 'bundled' and sold in a way that means the price-per-unit varies according to the size and price of the bundle (e.g. 100 credits for £5 and 200 for £7)," notes the guidance.

The guidelines also state that consumers must be made aware of how much a virtual purchase would cost in real-world cash to avoid obscuring the value of a transaction. "Where a storefront using digital currency falls within remit, the value of an item should be clear to consumers; they should be able to determine easily what the equivalent real-world price is for the item and/or whether they will need to spend money on more virtual currency," it continues.

'Odd-pricing' tactics, which force players to buy more currency than they require to buy items, are also deemed potentially misleading. As such, the ASA is advising those using the technique to warn players that a minimum spend may be required when advertising purchasable items.

The ASA has even flagged the presentation of in-game purchases as problematic, and notes that "immersive marketing messages" which attempt to pressure players into spending cash -- using techniques like countdown timers or needlessly complex offers -- would be best avoided.

"For ads within gameplay, such as pop-up offers to purchase extra resources to complete or retry a failed level, or to skip waiting times, marketers should avoid the use of mechanics that may place undue pressure onto players and prevent them from making an informed choice or mislead them as to the nature of the purchase."

As for loot boxes (defined as 'random-item purchasing'), the ASA says consumers must not be misled about their chances of securing certain items, especially where multiple purchases are concerned.

Finally, the guidelines state advertising should make it clear when in-game purchases are present, and must also highlight whether loot boxes are present -- although the ASA claims any such messaging doesn't need to be "especially prominent."

Although the guidelines are precisely that -- a guide rather than a statutory obligation -- the ASA notes has a variety of sanctions it can use against offenders, and could eventually refer them to other bodies who can take more drastic action.

"One of our most persuasive sanctions is bad publicity – an advertiser’s reputation can be badly damaged if it is seen to be ignoring the rules designed to protect consumers," it explains. "Ultimately if advertisers and broadcasters persistently break the Advertising Codes and don’t work with us, we can and do refer them to other bodies for the further action, such as Trading Standards or Ofcom. Such referrals are rarely necessary, as most advertisers prefer to resolve the matter directly with us."

Those interested can read the full guidance on advertising in-game purchases right here.