Story can be found in unexpected places in games. In this article series, I will discuss my thoughts on finding narrative in surprising places, and applying those structures to your own games.
Nathan Savant
Blogger
May 19, 2016

In the previous article I wrote about Mario, Metroid, and Minecraft, discussing their use of narrative. I stated that Minecraft tells its story by setting up a sandbox filled with toys and allowing the player to interact until a narrative emerges. I then compared Metroid to that, saying that Metroid creates its story by doing the same thing in reverse. I would like to take this article to expand on that second point. 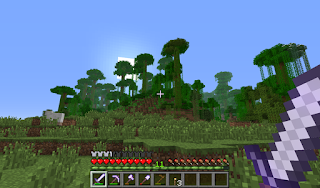 Minecraft is a sandbox game. You have a set of toys and you interact with them. Each toy works in a consistent manner, so if you use an axe on a tree, that tree will break apart and drop wood. The toys are neutral, as well, allowing any number of uses, meaning that your axe has an intended purpose, but can interact with objects outside of that purpose. If you want to dig a hole with your axe, you can, the axe just isn’t particularly good at that. Player actions are consistent, pressing the dig hole button digs a hole, even if you're not equipped with the proper tools. This allows players to build stories with their actions, because they are allowed to act in a variety of ways. Beyond that, these actions are all consistent between players of Minecraft, meaning that any story that unfolds can be told to, and understood by, any other Minecraft player.

This combination of elements is part of what allows players to act based on their personality. If an aggressive person plays Minecraft, the story that results from their action will likely involve lots of violence. They might chop down trees for no reason, and throw things at pigs or cows for the fun of it. If a timid person plays, they might build a fort that they slowly expand while hiding from the monsters that roam the countryside. Their actions, the choices they make, will convey their personality, and the sandbox gameplay will respond to that personality in kind. 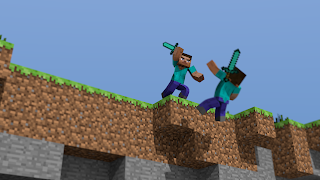 Equipped with that knowledge, let’s go back to Metroid. How would Samus play Minecraft? Well, she’s a bounty hunter, so she would have a target. She would pursue that target relentlessly. She would build the tools she needs to find the target and then immediately move towards that target. She would attack enemies as they appeared, and not back down until her task was complete. This is Samus’s personality, and we could extrapolate further if we needed to do so. 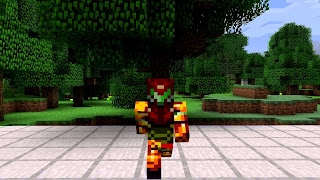 Looks like Samus is already ahead of us! (Skin Here)

Let’s imagine, for a moment, that we let Samus play a game of Minecraft. Let’s then imagine that we recorded that game of Minecraft. Each time we played through that recording, the same events would occur at the same moments. Samus would always chop the same tree, and always dig the same holes, because recordings never change. So what if we wanted someone else to experience life from Samus’s perspective? Perhaps we could recreate that Minecraft run that we recorded. We could rebuild the world and place every element in the same position that they were in when Samus encountered them. Then our task would be to get the player to emulate Samus’s actions. We could use tricks of psychology, such as placing easy-to-dig-through sand where we want a player to dig, to incentivize others to recreate the actions that Samus took. We could litter the ground with desirable objects to make a player go one direction, and block a path with enemies to prevent them from going in another direction. These are all standard game design tools, and they’ve been explained by people far more qualified than myself. All I’m trying to convey is the idea that a linear, story-based game is a game about a player experiencing the world through the eyes of another person.

The characters in our games are not merely that. They are people with personalities, and they make choices based on circumstances. Those circumstances are built by the game designers, as are the choices available to the character. If a person has a plasma cannon, how will that person use that cannon? Would they only use that cannon in combat, or would they also use it to burn through walls or locks? What are the other toys in their sandbox? And how do they interact with those toys? Are those toys only useful in one particular circumstance? And if so, why are they still playing with them?

A linear game is merely a sandbox with a specific narrative. A linear narrative is merely a series of choices that have already been made in that sandbox. Samus chased Ridley to planet Zebes, and down into its depths where they fought until Samus was victorious. That is what happened, and the game, Super Metroid, exists to allow players to experience those events. Samus, and the world around her, would be interesting even if the story were completely different. The toys in her sandbox could be used even in another platformer game, such as Mario, or even in a survival game such as Minecraft. The world of Zebes would make sense even if we landed on a different part of the planet, and pursued a different enemy.

In part 3 of this article series, I'm going to talk about developing the world to reflect the narrative and the player character.