"While it may just seem like another suit, this symbolized the team spirit we have at Insomniac and serves as a great example of our collaborative nature."
Chris Kerr
News Editor
July 21, 2021

The web-slinging heroes of Insomniac's Spider-Man franchise have become unexpected fashion icons. The combination of a well-crafted photo mode and plethora of impeccably designed suits in both Marvel's Spider-Man and its spin-off Marvel's Spider-Man: Miles Morales have made unlocking new threads and turning New York into your own personal runway one of the series' most satisfying pastimes.

Naturally, every player will have their own favorite look, but deep down we all know there's one suit that shines brighter than all the others. A stunning piece of hero-wear that incorporates an often friendly, always adorable, and sometimes ferocious companion. Yes, we're obviously referring to the Bodega Cat Suit.

Understandably, the Bodega Cat Suit became something of a talking point on social media around the time of launch, and why wouldn't it? The internet adores furballs, and here's one that'll swing around New York with you and occasionally assist Miles by booping nameless goons on the noggin'.

For Insomniac, though, the Bodega Cat Suit is more than just a tweetable fashion statement. Taking to the stage at GDC 2021, studio art director Gavin Goulden explained how the suit has come to symbolize the collaborative culture and spirit that propels the development team forward. 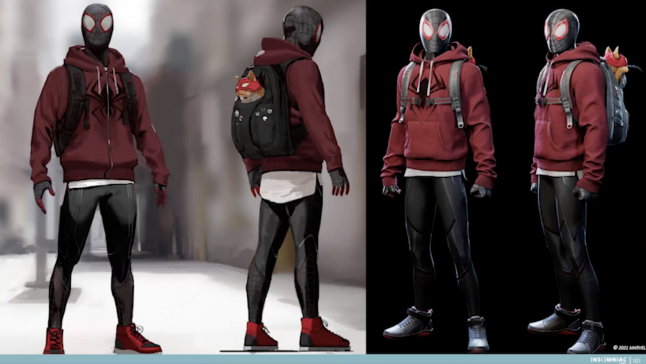 Offering some context, Goulden says the suit initially began life as a mission element, with a designer suggesting the team task Miles with helping out the owner of a vandalized bodega by rescuing their pet cat.

Goulden explains that mission concept, while seemingly rather basic, actually serves a number of purposes. For starters, it positions Miles as a more street-level hero by pushing him to deal with the issues of normal citizens. It also moves his personal character arc forward when the bodega owner names his feline companion 'Spider-Man' in honor of Miles, reinforcing the community's acceptance of our new hero, and has the added bonus of grounding us as players in New York (bodegas are a huge part of the city's culture).

Once the mission had been outlined, Insomniac had to actually create the suit and tackle some practical design issues. "We needed to transport the cat from Point A to Point B, and we wanted it to feel realistic and also not affect swinging, so we put it in a backpack," Goulden continues. "Then, since we already had the assets working, we naturally designed an [unlockable] suit that always had this cat in the backpack.

"[After that] our animators really pushed using the cat in a custom combat finisher, eventually bringing all of those pieces together to make a very memorable suit."

It's only one suit, but as highlighted by Goulden, it's a neat example of how Insomniac used collaboration to inform development and achieve success. In this instance, the studio utilized ideas from mission designers, animators, artists, and more to create something that has become instantly recognizable for all of the right reasons.