The entire concept of “Black Ops” acts as a rebuttal to Infinity Ward. Better, its usage of the numbers/the player himself is crucial in forming the narrative told through its high-octane gameplay.
Andrew Lavigne
Blogger
December 17, 2012

TV screens with numbers shooting across them. That's one of the first images that greets players of Call of Duty: Black Ops, but minimal attention has been paid to what this image is actually doing in the game beyond its obvious plot function as a trigger for Soviet sleeper agents.

Any music, book, and game creator will tell you: your beginning is everything and second only to your ending. It's your hook, it's where you declare what you are, it is the location of key images (or sounds) in the text. Before we find ourselves stomping about, reliving the back room of the Cold War and Vietnam as Sam Worthington avatar Alex Mason, we have the numbers.

The numbers are repeated so much that it is hardly a surprise to see that the most-repeated bit of dialogue from the game—“The numbers, Mason. What do they mean?”—has been turned into an internet meme. Strings of at-first meaningless numbers are present in the interludes between stages, adorning the monitors in your interrogation room; referenced in that above line of dialogue; appear in the pause screen, altering it during the last two missions until the player's objectives are just rows of numbers; and at the climax, when they take over the screen itself.

Most obviously, it brings to mind The Matrix's green code. As another media title where people are indoctrinated with digits, it is not a surprising comparison. A video game about Cold War era conspiracy makes a lot of sense as a place to use this sort of imagery.

They might be Mason's numbers, brain washing him, but they're also yours as his player. Humorously, the level after the tutorial prologue takes the idea of both Mason and the player being locked up in that programming by having you chained up in a gulag. 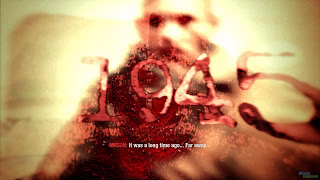 Then there's the very first thing we witness, even before the game opens: the title screen, with Mason restrained in his chair but from his point of view so that we're peering at the game logo and menu options from his eyes. Even more interesting is this tidbit from Games Rader writer Charlie Barratt:

What a cool concept. You don't just play as secret soldier Alex Mason

during the game… you play as him in the menu screens as well. Still

strapped to the interrogation chair...You can look around all you want,

even down at your imprisoned arms and legs, but you can never escape.

Or can you? You can! Simply pull the left and right triggers on your controller,

in quick and alternate succession...Do it fast enough and Mason will suddenly

break free of his restraints and stand up, free to explore the room.

We can thank Treyarch for going all the way with the “you are Mason” idea, but the numbers and brainwashing work as an almost self-aware way of addressing the previous Call of Duty games and how they treat their players.

Who recalls the “No Russian” level from Infinity Ward's “Modern Warfare 2”? The one where the game (codes, numbering—of course) forces you into gunning down dozens of Russian citizens and police at a somber pace?

The entire concept of “Black Ops” acts as a rebuttal to Infinity Ward. Better, its usage of the numbers/the player is crucial in forming the narrative told through its high-octane gameplay and plot.

Much of the critique aimed at the game from gaming-informed and -uninformed sources focus on its use of historical imagery, of its “recreation” of scenes from films, and employment of songs from popular culture. At worst, they claim, it devalues history and at best, it is a cheap rehash.

What these critiques miss is that by deploying quotations of historical imagery, film scenes, and popular music is that Treyarch is re-purposing these meanings—whether Treyarch wanted to or not—in a way that aids the “off the book, very hush-hush” nature of the game.

When we land in Vietnam via helicopter with Creedance Clearwater Revival blasting, or we shoot up some boats to “Sympathy for the Devil” while passing Apocalypse Now references, this is not without meaning. Different meanings than in their original appearances, but meanings all the same. Not content to fall into Battlefield: Bad Company 2's disastrous deployment of snark against real historical atrocity, Call of Duty: Black Ops is smarter than that game's self-admitted Call of Duty posturing by using these references for real meaning.

People forget that "Black Ops" is not only a back room look at the Cold War, but a lens that peers at American warfare. Bombastic war movies are not what it should be compared to, but rather to James Ellroy, noted for writing historical fiction from the point-of-view of bigots and the morally corrupt. These are not our typical "oorah" marines we play as, but a brainwashed man, a CIA spook, and a Russian WWII veteran betrayed by his own country.

By referencing these events, films, and songs but placed against the backdrop of ethically dubious warfare performed by these characters it skews the references, shows the numerous Apocalypse Now jokes in films as trite. Here, references are used to further the game's narrative and message. Treyarch's previous effort, "World at War," attempted to do something similar by contrasting blatantly modern CGI animation in pre-mission cutscenes to a visually accurate period look. The music in that game did the same by often being contemporary pieces full of synth and rock mixed with period songs and more typical orchestra. But it didn't fully succeed, instead falling into the trap of imitating "Modern Warfare."

The question is one of tone and presentation. "Black Ops" nails both. 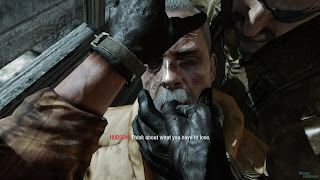 We have to remember, we are not just playing characters named after those in The Rock with a chemical weapon that parallels that film's chemical weapon, we are playing characters named after those in The Rock who (as the player controls them) place shards of broken glass in a restrained scientist's mouth and precedes to punch him for information on that parallel chemical weapon. When we land in Vietnam to some Creedance playing, we are being presented with simulacra: Creedance and Vietnam are synonymous, so it's what we expect.

It sets us into a false comfort that (should, by all means) be arrested when we see something like that disturbing torture scene, the state of the items in the torture room our hero sits in (how many times have they been used? they look worn for such a state-of-the-art building, don't they?) and, greatest of all, the ending.

The whole of these references build to that ending. Americana reshuffled into reversals of popular scenes and recreations laced with dark irony.

The ending goes like this: Mason defeats a terrorist before he can use sleeper agents to launch the chemical weapon against the United States, escapes a ship as it's sinking and exploding, and reaches the ocean surface. The typical happy ending you'd expect from a Hollywood summer movie, right?

What happens when the player reaches the surface is hyper-patriotic and hyper-positive. I can only describe it as A Michael Bay Image.

The player breaks the ocean surface to be greeted with dozens of American choppers soaring overhead. He's helped onto a boat by one of his comrades from earlier in the game, or declares “It's over. We won!” just as the player's view shifts to two Navy battleships framing a majestic golden and red dawn (highlighting the American flags), wild guitar chords kick in, and jets soar through the gap between the battleships.

That sounds pretty funny--if the game ended there. But it doesn't, and the ending must be taken in the larger context of the rest of Black Ops' ideas, the most important being the scene that interrupts this picture-perfect Americana.

Without so much as a fade to black, those strings of numbers we've seen all throughout the game are overlaid on the scene of the battleships and American flags. We see it through Mason's eyes—they are our eyes. We watch our character's entire vision fill with the numbers, red on a black background, replacing the ships. Is he overwhelmed at this point? Lost to the programming?

We don't know what he is now, but after a fade to black we see live action video. We first saw these images at the beginning of the game: a woman's hands on a radio microphone, ruby lips, a sheet of paper scrawled with numbers. The woman reads the numbers again and again. Mason starts to recite the numbers with her.

The numbers are being sent out via radio message to activate brainwashed sleeper agents.

One last image comes: archival footage (i.e., "real" life video) of John F. Kennedy stepping off his plane in Dallas plays, backed by ominous and sad music. We close in on a crowd shot, and we see our American hero Alex Mason in it - in the crowd at Dealey Plaza - just as he finishes mechanically reciting the caliber of the bullet used to kill Kennedy. Hard cut to black. Cue “Sympathy for the Devil.”

Mason, and by extension, you, are responsible for Kennedy's death. We are the man on the Grassy Knoll. Conspirators who, together, killed American innocence. First abroad, then back home.

By inducting us into this world via the well-known Call of Duty action gameplay, with its addictive shooting and eye-pleasing set pieces, it pulls us into its blend of movie reference and historical fact more readily than if a game with a legacy of being "smart" (like Deus Ex) proclaimed the real truth of America's past. Lulling you with the pleasing gunplay makes the other moments of violence, like the torture scene, stand out all the more for their horrific nature. It's an interesting contrast. One that wakes you up.

In a way, it's also more honest than previous war shooters, with the exception of the first "Bad Company," in that we play as people like CIA spook Hudson, who most certainly existed in some form in those times, or our eternally-confused Mason. They're not morally clean, and some are genuinely awful people, but they too answered the call of duty.