Very often in a social game, the same feature can result in significantly different player experiences, depending on the relationship between the participating players. In this post we present some examples from our own game.
Andreas Papathanasis
Blogger
January 17, 2018

[This was originally posted on my personal blog]

Social games have an interesting property: The exact same feature can lead to significantly different experiences, depending on the relationship between the participating players.

These three types are generic and should apply to most social games. Other more specialized relationship types and sub-types exist, and some games can create and reinforce their own relationship types. But the three above are a good initial starting point when thinking about how prior interactions between players (or lack of such interactions) can affect their experience in a social game. 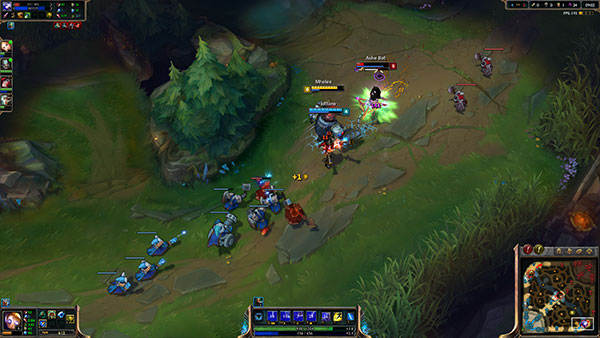 Often entire games (or their individual sub-features) are designed around a specific relationship type, and can break down badly when that assumption is violated. A version of Mario Party or Spaceteam playable online with strangers would only provide an unbalanced, awkward, potentially toxic experience. Team based competitive games like League of Legends are typically less enjoyable when played with complete strangers, as opposed to a team that has been playing together for some time – especially when considering the quality of the social interactions.

On this post, I present a case study from designing social features for our game, Hades' Star, while keeping different relationship types in mind. I will describe how the features worked out in practice when released to actual players, and how they break down when the relationship among players isn't the expected one. In some cases, this break down was a surprise to us. Other social designers may find some of the insights helpful.

Hades' Star is a persistent space strategy game, loosely inspired by Master of Orion. In the game, players colonize planets, mine asteroid fields, establish trade routes and fight AI ships to expand into their own corner of space (the "Yellow Star" area they are assigned to). By default, no other players are allowed access to that Yellow Star. Interaction with other players happens via separate features, as described below. We designed these features specifically to target the three different player relationship types defined above. 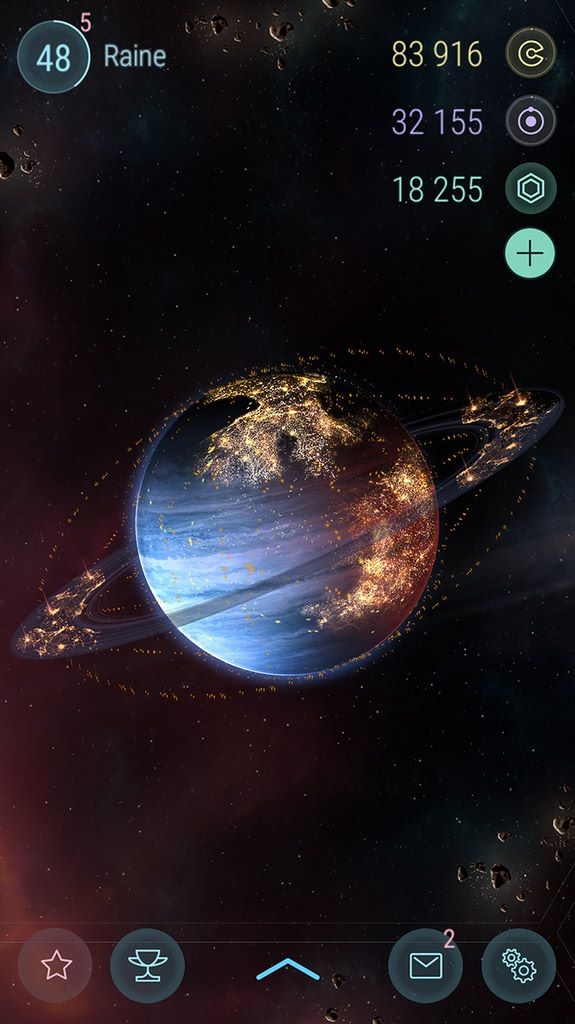 After a few days of progress, players have the option to construct a Diplomacy station. That station allows them to link their Yellow Star to another player's Yellow star, enabling both players to jump their ships to the other player's home area. There are some benefits to sending ships, like helping the other player with combat against AI, and trading.

From the beginning, Diplomacy was designed to be an optional feature exclusively for close friends who happen to play the game together. It can be completely skipped without significantly sacrificing progression rate.

We regularly hear from close friends, relatives, and couples, that they enjoy this feature as it brings into their hobby another person they care about. Very often one or more of the close friends participating are playing extremely casually, largely ignoring the rest of the game’s features. They just show up daily partially because they way to interact more with the person they care about.

Close friends are not the only types of players that use our Diplomacy feature. We have also seen it used among strangers. Some players prefer combat to trading, and vice versa. Those players have found they can use the Diplomacy feature to link their star to another player that can do for them the trading or combat daily activities they don't like. They find such helpers by asking in public chat channels. Seeing a feature designed for close friends also bring some strangers together has been really cool.

We have yet to hear of a player having a bad social experience with our Diplomacy feature. We attribute this to the rigid rules we use to guard this feature against strangers trying to grief each other. We do not allow any kind of direct attack against the other player, and guard against unwanted behavior by allowing a player to instantly end diplomacy at any time (this will send the other player’s ships back to their home star).

The main 10-minute loop in our game is the Red Star mission. Every day, players send their battleships to procedurally generated star systems that have very short lifetime, contain planets with valuable Artifacts, and must fight the AI ships guarding the planets in order to escape with the loot. Red Stars are open to everyone: most systems will have 2-5 players participating at the same time.  These players cannot attack each other, but they can work together to take out the guarding AI ships.

From the beginning, we knew that because of their matchmaking mechanism, Red Stars would generally pit strangers together. Our initial, naive assumption was that we could encourage cooperative gameplay between the 2-5 strangers. In practice, most players saw Red Stars as a competitive mode, with the goal being to take more Artifacts than the other players. They would use “friendly fire” effects in ship abilities to slow down or neutralize other players. The minority of the players who wanted to play cooperatively cried foul. Naturally, the entire situation wasn’t good for the community and against the positive spirit of cooperation we wanted to promote.

In retrospect, the reason for this failure is obvious. We tried to design a cooperative mode out of a zero-sum experience (in Red Stars, Artifacts are shared which means one player’s gain is another’s loss). This is extremely hard to accomplish when the participating players are strangers. Daniel Cook’s phenomenal work on Game Design Patterns for building friendships describes how when there’s no pre-existing relationship between two players, loss aversion and other factors make it less likely for a positive reciprocity loop to start developing.

If we could design this mode from the beginning, we would try making the whole experience non-zero sum (i.e. separate Artifacts per player). In the end, we kept the “competitive” Red Star mode since many players enjoyed it, and it fits with the game’s theme (a lawless area of space, where pirates and bad behavior by other actors can be expected). We were still able to offer a separate version of Red Stars that matches our original cooperative vision, giving an alternative to players interested in playing with online acquaintances or close friends. 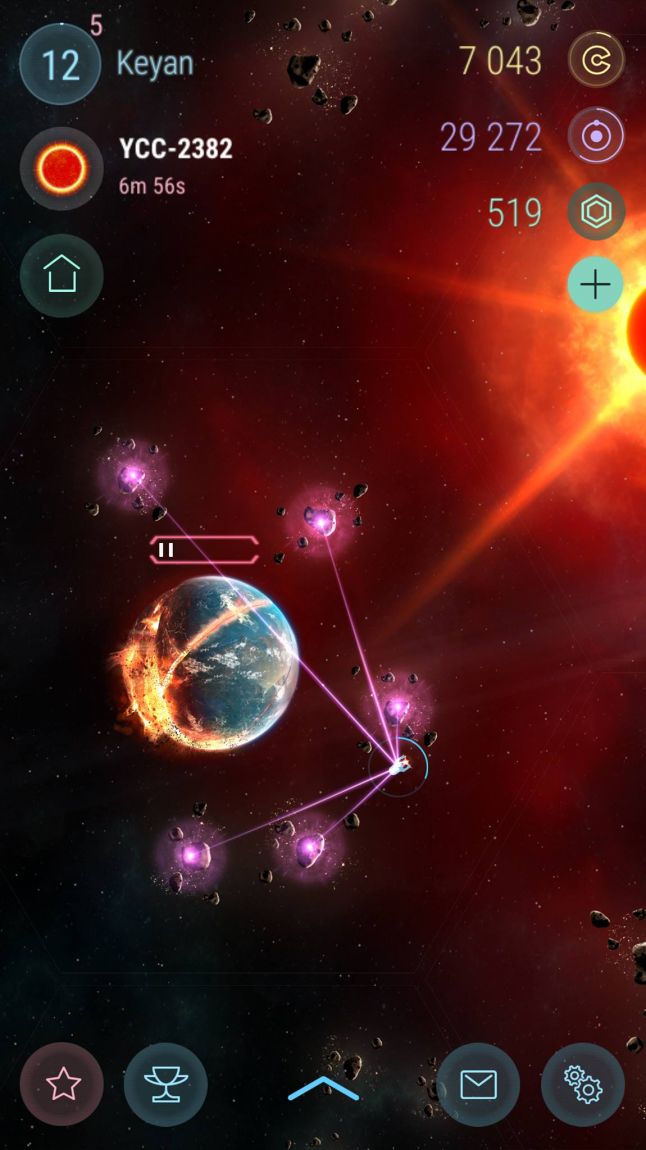 Hades' Star offers a feature where players can group together in so called Corporations. Such social structures that allow player grouping is a classic way MMOs turn people from Strangers into Online Acquaintances. The quality of the shared experiences players go through together determines the strength and quality of the relationships.

In the initial version of the game, Corporations simply offered a common chat area where players could talk daily to other players in a more private setting than the very noisy general chat channel. Even with this small feature, many Corporations created real bonds between players, via daily interactions involving mainly questions around the game and helping newer players advance.

With Corporations in place, we had an obvious way to turn Red Stars into an experience between acquaintances, not strangers. A few months after launch we introduced Private Red Stars, which could only be accessed by players of the same Corporation. As expected, we found that these Red Stars offered a completely different experience.

When part of a smaller group, and because they knew they would interact with the group again, players abandoned all tendencies to be selfish in Red Stars. Instead the pattern of players joining Red Stars with the sole purpose of helping newer players became much more frequent. Most Corporations created implicit or explicit rules about not stealing artifacts from other members, and even the ones that didn’t quickly got rid of a few rare bad apples that didn’t follow this expectation. We have never heard any complaint about stealing in private Red Stars. Even if it does happen, the solution is simple: A player could simply search for a better Corporation.

WHITE STARS, AND THE CHOICE TO GATE ACCESS TO SPECIFIC RELATIONSHIP TYPES

Our newest Corporation vs Corporation feature expects online acquaintances to be pitted against strangers. This mode pits two teams of 5-20 players each in a shared White Star area, where the goal of each team is to collect the most resources. Moving ships in this mode takes a very long amount of time (the entire game lasts 5 days), effectively making the whole experience asynchronous. Similar to games like Subterfuge and Neptune’s Pride, this gives a lot of time for chatting and coordinating with fellow Corporation members. Unlike those games, each player has the same goal with their Corporation mates, so there’s no “let’s make a fragile pact now that we’ll certainly break later” nonsense. It is not possible to communicate with the enemy Corporation – they’re just there to provide the cunning and unpredictability of a human opponent, not for social interaction. 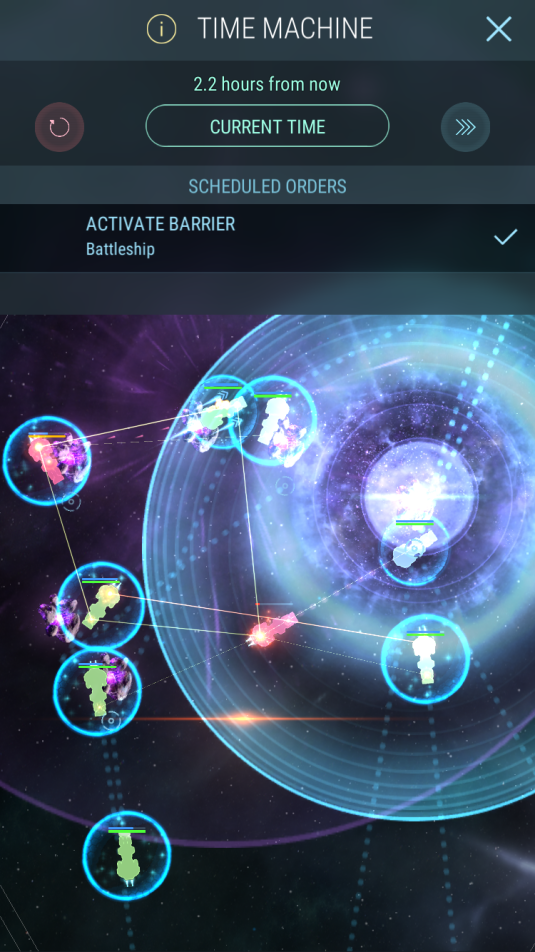 Team based cooperative games often suffer when the team is composed of complete strangers. The more experienced players can be toxic to players who haven't made a lot of progress or aren’t as skilled. By offering this feature only to Corporations, we have pre-emptively worked around many of those issues.

Players who tell us about their first White Star experience always mention the positivity of figuring it out along their Corporation members, even when that first experience is negative for other reasons (i.e. because the Corporation they got matched against is much stronger than theirs). We have heard countless stories of people bonding, sticking together against the odds, implementing and changing plans for hours.

Of course, the quality of the relationships in a given Corporation is fundamental to the experience its players get in White Stars. Most of the dedicated players have figured out how to create or join well functioning Corporations that help them get the most out of the feature. What we love seeing the most is that there’s no specific organizational structure that works the best. Some of the most successful Corporations in White Stars are dictatorships, relying on the specific instructions of one or two players on how to proceed. Others are more open, with players voting or simply doing what they think is best with their own ships. Different approaches work for different players, both in terms of getting positive results and for enjoying the feature itself. We now have some extremely close-knit groups in the game, that have gone through many White Stars together. That’s great, as this was precisely one of the main goals of the feature.

On the other side, players in low quality Corporations that don’t communicate or cooperate usually get a bad impression of the feature and don’t participate again. This is expected – our goal now is to help educate players on the advantages of organized Corporations, to the extent we can.

Choosing to make White Stars accessible only to Corporations has its cost. Not every player is interested in joining a Corporation, so a big chunk of our player base can’t access what is possibly the best feature in the game. Lower player numbers are also an issue for matchmaking: If we allowed teams of strangers, the player pool would be bigger leading to more fair matches. We understand the cost and happily choose to pay it in order to deliver our proper vision for white stars. For your social game, you should consider whether the cost of limiting a feature only to certain relationship types is worth it.