While the original Batman: Arkham Asylum presented us with the titular locale's claustrophobic, Gothic environments its sequel presents a uniquely "open" claustrophobia that only a city could emit.
Andrew Lavigne
Blogger
February 11, 2013

At Pop Matters, G. Christopher Williams' review of Batman: Arkham City calls for a return to the cramped settings of Arkham Asylum, but I think the game already is set in a cramped setting. Just not quite one we've ever seen before. While the original Batman: Arkham Asylum presented us with the titular locale's claustrophobic, Gothic environments, its sequel presents a uniquely "open" claustrophobia that only a city could emit.

The city is big, yes, but it's walled. (It's also the most rounded, interesting character in the game.) Instead of being just down a (mostly) linear hall, danger could be anywhere and often is; the alleyways are limitless, the buildings go on and on. Plenty of hiding spots. And sometimes, the danger is presented by the player to the enemies instead of the typical opposite of enemies being a threat to the player.

All of this is thanks to the open claustrophobia of Arkham City's architecture and art design. I say "open claustrophobia" because what it presents us with is what many players will stop and stare at upon climbing their first building: seemingly endless, horizon-feeling space they can explore that's crowded everywhere by its art details. Ugly but pretty for it, the game presents us with a city-within-a-city where decaying factories mix with carnivals and Art Deco and 1800s construction, all made over with a Noir paintbrush. It's garish, yes, but not pointlessly so like Joe Schumaker's awful film vision of Batman & Robin. Instead, it resembles dark fantasy art. A world not quite possible, not quite ours, but similar.

The sick/slick visuals--full of neon green signs, rusted factory towers, highways that fall into the sea, and Deco statues--crowd the screen so much that they crowd the player. Little details like bits of dirty snow hanging off buildings or political posters (resembling Big Brother mixed with Nazi propaganda, of course) further overwhelm the player. The feeling it gives off is of being in hell, comprised less of sensible city zoning regulations and more of "layers" shoved together.

But for once, this isn't a bad thing. This isn't a case of developers gone wild. This is exactly what fits the situation: a contrast of controlled anarchy, represented by world and art design. Delving into the underbelly of the game world, when the player encounters a buried "City of Tomorrow"-type Deco area, we realize that it exactly matches the message played over its intercoms: if mankind continues its upwards ascent, the buildings will grow to resemble hell breaking through the sidewalks, up and up and up, until we choke to death and are no more. 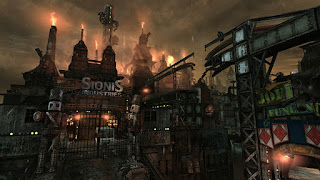 Does that mean Batman: Arkham City is the first notable game to not only include fantastical architecture, but to include it and to comment on its architecture and city spatial dimensions?