Legible font (still) one of the biggest accessibility issues in games

Game accessibility has come a long way in recent times, but there are still important areas in need of improvement. Not the least of which is making game text easier to read for a wider range of people.
Kris Graft
Publisher
August 05, 2020

Game accessibility has come a long way in recent times, but there are still important areas in need of improvement. Not the least of which is making game text easier to read for a wider range of people.

Karen Stevens, accessibility lead at EA Sports said in a pre-recorded talk at this week's GDC Summer, "Legible font is one of the biggest issues we have for accessibility in the game industry at this time."

She gave recommended legible font size guidelines (below) and said by comparison, the TV industry standard is 80 pixels tall vs. her recommended 28 pixels tall. In short, game text is often way too small to be truly accessible.

Stevens also gave a bit of credit to the often maligned comic sans font. "Comic sans tends to get a bad reputation but really it's a very, very good font, particularly for dyslexia," she said. "...So I highly recommend that."

"Keep in mind that font is so important in so many places that [in the] the defense industry, a lot of places insist on using that font for all business documents simply because it's easy to read," she said. "So keep that in mind." 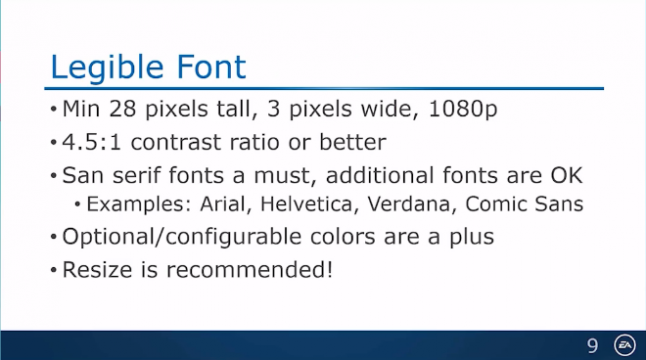 You might not be able to imagine your game plastered in the more legible comic sans, but she said it's possible to have it as an option.

Speaking of options, Stevens also recommended that games include the option to resize fonts. However, she said that having that option should not be a free pass to make default text size tiny and illegible.

"If nobody can read your text, it may as well not exist," Stevens said.

"I consider accessibility the mismatch between a person and their environment," Stevens said. "This is more than just disability. This includes things like if a tall person can't fit in an airplane seat. They have an accessibility problem."

But accessibility does also include more commonly recognized situations, she said, such as if a deaf person needs captions to follow a TV show, that's also an accessibility issue. ("I happen to be deaf, so that one's near and dear to my heart," Stevens added.)

Games are getting better at including accessibility options, but she pointed out that often these options are tucked away in inaccessible menus. "If settings are not accessible, they may as well not exist," Stevens said.

For the Madden series, Stevens showed how the dev team implemented a welcome screen that appears as soon as the game boots up, and even before the game is fully installed. At this screen are the most important accessibility options such as volume control, in-game communication, and other options before the game even starts. 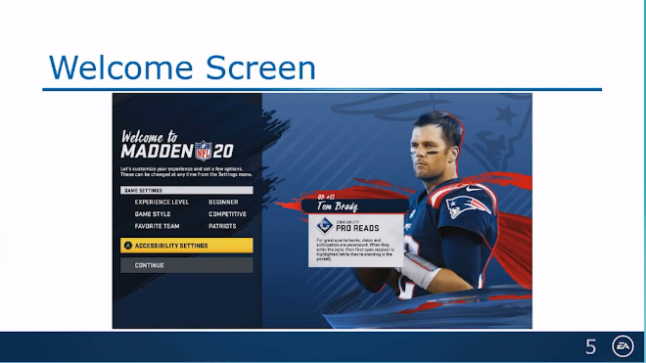 "I have sat through many intros of games, and not been able to turn on captioning until well later in the game. And by then I'm lost," she said. "This is true of all settings--it's important that they're there from the very, very beginning."

Stevens also said that for Madden and other EA titles, the company believes in putting accessibility options in "as many places as possible." She again stressed that people need to be able to easily get into those settings.

Near the end of her talk, Stevens reiterated the importance of legible font in games. "None of these menu options matter if no one can see them. It's really, really important to have legible fonts throughout your entire game."