Despite having the word "games" in its title, Riot Games spent the better part of the 2010's building off of the release of a single game: League of Legends. Late last year, that all began to change with the release of Teamfight Tactics, an autobattler in the vein of Auto Chess, a mod that grew popular in the DOTA 2 community before multiple gamemakers began to develop full titles inspired by it.

At GDC Summer, Teamfight Tactics design lead David Abecassis finally got to deliver a design-oriented talk that covered why Teamfight Tactics has been such a huge hit: in particular, why it's been so successful with League of Legends players who may have drifted away from the original game.

Abecassis explained that Riot employees became obsessed with Auto Chess at the start of 2019, loving how it embodied some of the high moments of MOBA games, but compacting them into a more relaxed, non-confrontational experience. If you're wondering how a game can embody the MOBA genre, but still be "non-confrontational," Abecassis credits the game's free-for-all/Battle Royale-type experience, which mathematically lowers the player chances of winning. "It's quite different from 50-50 PvP games, where if you're not winning, you're losing," he pointed out.

(This is technically true of the autobattler genre as well, but when you have 7 opponents enter and 1 leave, that's a different experience than the tense team-based combat of League of Legends.)

Since Riot happened to also have a globally popular MOBA lying around, they realized they could build something similar to capture that experience. To that end, Abecassis said it was important for Riot to identify who'd even want to play "League of Legends Auto Chess" anyway. He described the ideal Teamfight Tactics player as someone who still enjoys the competition and mastery found in League of Legends, but who isn't interested in testing pushing the physical capabilities that the MOBA demands, in favor of a more relaxed experience.

These players do exist (especially on the older side), and may be an audience orbiting multiple game franchises. 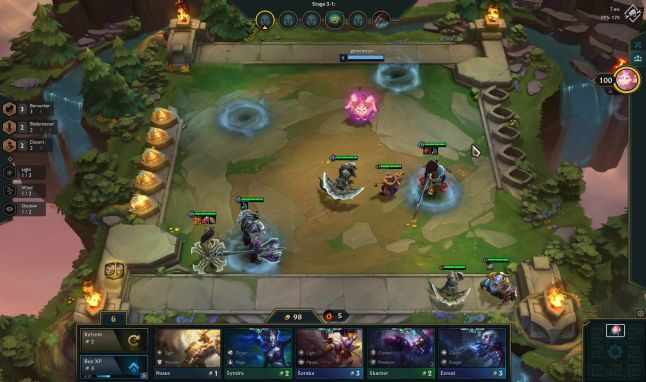 That characterization informed design decisions on Teamfight Tactics, such as how players acquire units during the game's planning phase. An earlier build of Teamfight Tactics required players to quickly click around during a 30-second timer to manage their units, in a process called "juggling," that let them purchase more units than they could store on the bench in order to find the most strategically viable advantage. It was a mechanic that fits the game's balance, and rewarded high skill, but punished players who couldn't process information or click quickly.

The solution was to keep the timer, but limit the total units a player could purchase, and deny them the ability to purchase more units than they could field. This raised some feedback from playtesters, who objected that the juggling mechanic helped the best players rise to the top. But by shifting the team's design goals, the notion of what determined the "best" players had to be adjusted to fit the game's new direction.

Obviously not every developer has the resources to muster a whole other development team to capture a portion of their audience that may be exhausted on their primary game, but if you're trying to retain a fanbase, it's an interesting development exercise--even over the span of a year, your players' tastes and motivations may change, leading them to drift away from high-level play on your live game.

When this happens, the Teamfight Tactics development story may be a way to help them stick around and still be part of your community.