Level designers with a particular penchant for stealth share their go-to approaches for creating sneaky moments in games like Assassin's Creed: Syndicate, Dishonored 2, and more.
Kris Graft
Publisher
May 22, 2020

Whether it’s creeping up behind a guard ready to deliver that decisive blow or memorizing patrol patterns to slip by unnoticed, level designers have a huge part to play in establishing the moment-to-moment experiences of our favorite stealth games.

It’s their job to nail the flow of the level, as well as orchestrate moments that make good use of the core mechanics. But there can be a huge difference in how a studio might approach this challenge, with projects often requiring a range of philosophies to bring about the best opportunities for the player.

In order to find out more about the intricacies of level design as well as the specific design approaches associated with stealth level design, we reached out to three developers who have worked on a number of projects over the years, from Arkane’s Dishonored series to Ubisoft’s Assassin’s Creed games.

Blocking out a level

To begin with, it’s probably best to get some common misconceptions out of the way first. That is, the role of a level designer and their responsibilities. Among the most common misunderstandings is the relationship between level designers and environment artists.

“You often hear people refer to a level that they like and they say, ‘The level design is really good in this, because it looks beautiful,’” explains Zi Peters, level designer at Sumo Digital, during our chat at Yorkshire Games Festival earlier this year. “But that’s not what level design is; that’s just purely the aesthetic side. That’s the environment artist coming in afterward. Level design is very much about spatial design.”

As Peters explains, level design is more about how an environment is built in accordance with the mechanics of the game and the systems, so adhering to metrics guidelines, for instance. He uses the example of how tall a character is, how high they can jump, their crouch height, and the reach of weapons or other projectiles. Typically, a level designer will start by designing a prototype of a level or a blockout with these requirements in mind as they develop the scene. 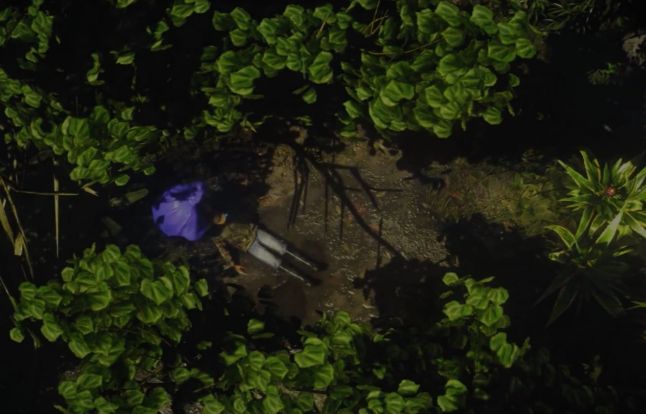 “[At Sumo], we do a lot of stuff on paper as flow diagrams,” says Peters, who helped design the Colombia level of the stealth-action game Hitman 2 at Sumo Digital (assisting IO Interactive), and previously worked on Disneyland Kinect Adventures at Frontier. “We try to account for as many different possibilities as we can on paper, then it’s cheaper to hit those possibilities and rectify them there for building out the environment itself. You get a real sense for things, and it is the things you won’t account for once you start building out the actual level [like] placing the targets in, doing their loops. And then you can see what other issues you’re going to have.”

Talking about his own design process, level designer Steve Lee, who worked on Dishonored 2 and John Wick Hex, comments, “The blockout stage is about figuring out what your level is supposed to be by making a rough but representative version of it quickly, testing it, and then iterating on it as much as you can. I try to approach things pretty logically, in terms of understanding what the level is fundamentally about first (its key ideas and unique concepts, goals and constraints, themes, setting, etc), and work from there. Generally speaking, the most unique, important, and risky stuff gets special attention early on.”

In some rare circumstances, however, studios may take a slightly unusual approach. For instance, on Assassin’s Creed: Syndicate, Ubisoft Montpellier’s level designers didn’t have much of a chance to prototype their areas, with their role instead being to assist the artists with level flow later in development. This is when they could alter aspects such as traversal, enemy placement, and mission flow. There were a few reasons for this more collaborative somewhat cross-discipline approach, explains Vincent Barrieres, a level designer who worked on Assassin’s Creed: Syndicate’s Whitechapel district and Jack the Ripper DLC

“In Syndicate, because everything was created inside the [Anvil] engine by itself, I did not have the opportunity to create, you know, some grayblock or blockmesh level,” says Barrieres. “We worked directly with the level artist, so it was they who created the visual part of the game. We were just here as level designers to help them: 'hey, I just need that' or 'I really need this.' So it was a collaboration between level artist and level designer more than a level designer creates the whole level on its own and then gives it to the level artist.” 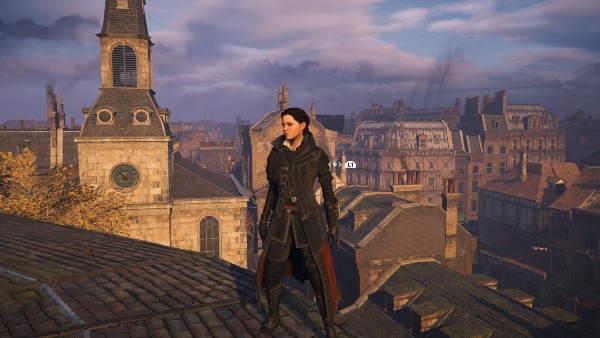 In terms of principles for building out a level, one of the most important aspects of stealth level design is accounting for player freedom. This is especially important if you are working from real-world references that could hinder the potential for good stealth opportunities if taken as-is.

“Sometimes when you look at architectural plans, you can get like a lot of dead ends and things,” Peters comments. “In a stealth game, you want to create these nice loops where you can move around, so you’re never stuck somewhere and then see someone is following you and you’ve got nowhere to run or hide.” To compensate for this, he feels it is important to open up more areas for the player to ensure they always have options available in a pinch.

In Dishonored 2, they achieve this freedom by giving players a number of abilities that they can use to traverse the environment. However, the design of the levels themselves also offers a ton of variety by providing players multiple ways to enter a room or fulfill a quest objective.

“Empowering the player to play in their own way is really fundamental to the idea of games presenting interesting choices and there being depth to the gameplay,” Lee states. “But in Dishonored, the notion of different play styles is made more explicit by the way that the game recognizes—both in terms of stats and achievements, but also in the interactive narrative—how the player is playing. And because that's a pillar of the franchise, it means that, as a level designer, we want our level design ideas to emphasize the significance of players' choices and the non-linearity of the game.” 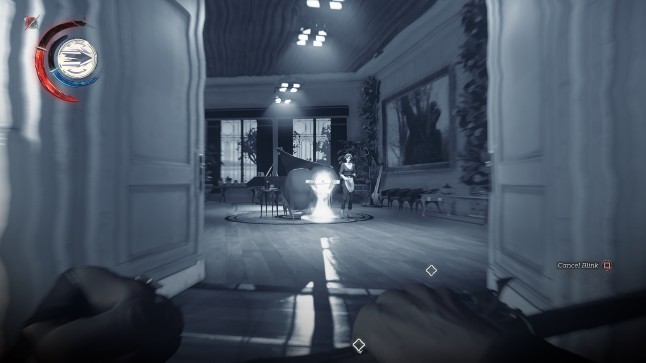 According to Lee, this means presenting the player with gameplay obstacles that have many potential solutions, though he also believes that narrative design plays a huge role in implementing these choices in a compelling way.

“For example, the many non-lethal solutions to dealing with assassination targets in the Dishonored games are interesting because, in terms of gameplay, it's generally much easier to just kill an enemy than it is to discover the non-lethal way of dealing with them, then carrying it out. And yet many players are drawn towards the non-lethal approach because it's important to them in a purely narrative sense. The story, experience, and the fantasy that they're playing out in their head is more important and interesting to some players than the gameplay challenge, or simply ticking all the boxes and getting to the end of a game.”

One excellent example of this practice is in The Grand Palace mission, where players have to take out Duke Abele. Upon entering the area, they can either brute force their way through the mansion by picking off guards or go to the added length of locating Armando, Duke Abele’s body double. With the double located, the player is then able to replace Abele as the Duke of Serkonos without a single drop of blood spilled, but not without great difficulty.

Compared to many other games in the stealth genre, Assassin’s Creed: Syndicate is a much more action-oriented title and owes less to the tradition of the immersive sim, but its level designers still tried to make provisions for stealthier approaches to its missions while players explore its open world. This feat is usually accomplished through the game’s use of verticality, as well as its implementation of several hiding spots, such as foliage and carts, and the rudimentary patrol pattern of guards.

“The philosophy always in Assassin’s Creed about the way the player can approach situations is a 360 philosophy,” says Barrieres. “We call that the black box. It means the player can always resolve a conflict or situation in the game by stealth or by using force. So, for us, we always have to think of those two ways for the player in the way we design the level.” 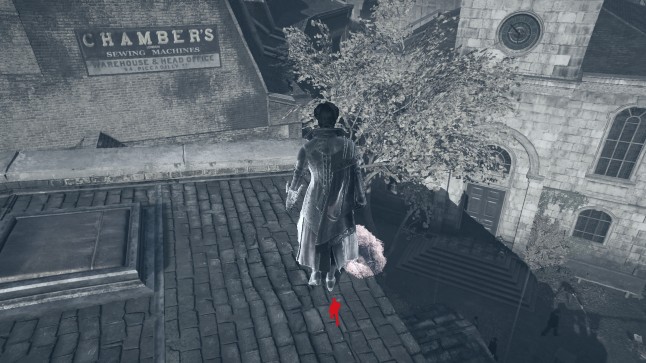 According to Barrieres, it’s important for the player not to feel constrained by one way of thinking. In Assassin’s Creed: Syndicate, for example, players are given the grappling hook, as well as some other helpful tools, which lets them achieve greater mastery over their environment and unlock new ways to navigate the level and evade the detection of guards.

As a final question/questions, I was curious to hear what tips they would offer to those hoping to get into level design. What should an aspiring designer be doing to make themselves more employable? And what universal skills should a level designer try to prioritize when working on a stealth game? Here’s what they had to say:

“The big thing I think you have to work on is a portfolio because that’s an illustration of your skills,” states Peters. “It easily says to a prospective employer that you’re going to be able to do what they ask you to do. So, I worked on using Unreal Engine 3 at the time and the Unreal…Editor, creating a level in my spare time and landed my first design role at Frontier in Cambridge.”

Lee adds, “I think a key skill is to be able to think about how all of your players of varying skill levels and styles will experience different parts of your level… I think it's a really good skill to be able to think about both gameplay situations and narrative design that works on many levels, for every kind of player—and not just the players like you, or those who are really dedicated to your game."