Express yourself: Designing an inclusive character creator for OlliOlli World

"You can be whoever you want to be." That's the promise at the heart of OlliOlli World's brand new character creator, which, in a first for the popular skateboarding series, allows players to customize their avatar to better represent who they are. Despite that bold pitch, it'd be easy to think of customization as an afterthought -- something tacked on at the end of development -- but Roll7 creative director John Ribbins explains it was a feature the entire team pursued with verve from day one. Skateboarding, after all, has become a diverse sport, and the studio understood it had a duty to reflect that in-game

"Skateboarding is way more diverse now than it was in the '90s. There are a whole bunch of people who love skateboarding who hopefully want to play OlliOlli, and want to play OlliOlli as someone who looks a bit like them," explains Ribbins. "It would only be right that we give them the opportunity to do that -- not just in terms of body type or how people identify, but also in terms of style and how people dress."

Although it's a new feature in OlliOlli World, the idea of customization is one Roll7 has been flirting with for years. It was initially slated to appear in the original OlliOlli titles, but ultimately fell by the wayside due to scoping concerns. "With the first game, seven people worked on that, so we asked ourselves 'what things are likely to go wrong?' and the answer is always customization, editors, and those kinds of things," Ribbins explains.

The studio even had a working prototype at one stage that allowed players to choose the color of their skater's pixelated t-shirt -- the original games were 2D affairs, remember -- but even that 'simple' swap raised some design concerns. "As soon as you can do that, people will think it'd be cool if you didn't have to wear a t-shirt," Ribbins continues. "[Then it's like], okay well there are 2700 frames of pixel animation we'd have to redraw as a jumper instead of a t-shirt in order to make it happen, and then you're just going to end up with a crazy amount of work." 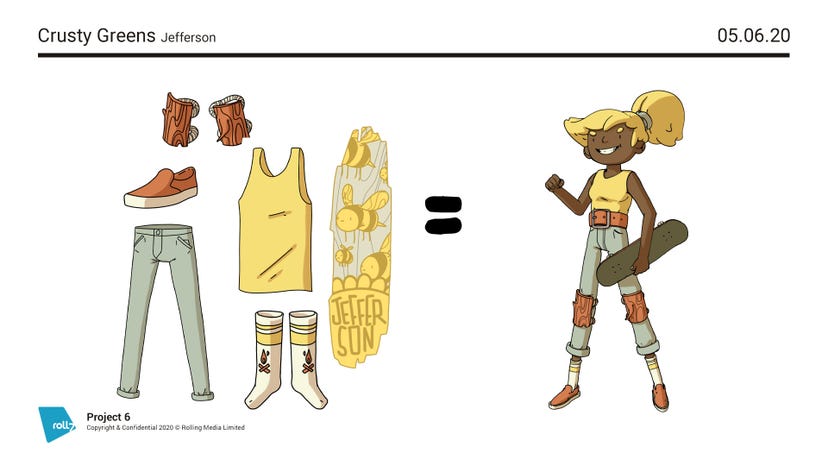 At the time, the studio reluctantly decided that customization was too big of an undertaking for its small team, but after switching to 3D from 2D for OlliOlli World -- and making some new hires over the years -- the stars began to align. "We always wanted to move the game into 3D because that solves a bunch of problems you have in 2D.  By moving into 3D you could model a jumper and a t-shirt into the same rig, meaning you can get players wearing a jumper while skipping out 70 steps of complexity," notes Ribbins.

Perhaps because it had been such a long time coming, Ribbins explains the character creator quickly grew legs, evolving from a tool that allowed players to change the color of generic attire like jeans and hats into something almost incomprehensible in scale. As it stands, there are currently over 1000 items for players to mix and match (including variations), and that colossal wardrobe can be traced back to a few choice outfits that set the studio's imagination alight.

"In the early stages there was one character model where you could change the colors and stuff, basically, and then when we went through the greenlight milestone we made three character models. They were all quite androgynous in terms of clothing, and you'd have a trouser mesh, top mesh, and hair mesh that you could switch out and change colors," recalls Ribbins.

"Then somebody made a panda outfit including a top, legs, and hat that covered the whole head, and then someone else was like 'we should have onesies right, or full costumes where you dress as a bumblebee.' So we made those, and they obviously stayed in the game because someone on the team loved the bumblebee outfit." 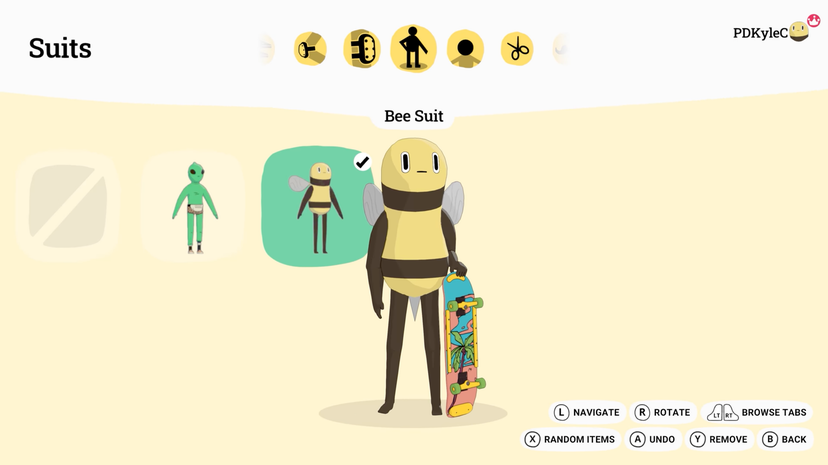 Breaking into a smile as he recalls the origins of that buoyant bumbler, Ribbins says that while the studio was excited about leaning into the weirder side of OlliOlli World and bulking out the title's roster of fictional brands and zany outfits, that eagerness to deliver the goods with serendipitous aplomb caused few headaches. Take puffer jackets, for instance. It's a seemingly innocuous piece of clothing, but in adding a sleeveless item to the title Roll7 inadvertently introduced the idea of layering into the mix.

"Someone suggested we include puffer jackets with no sleeves, but then someone else realized the t-shirt itself was fixed. So if you put a puffer jacket over the top, it replaces that t-shirt with a predefined item of clothing," Ribbins explains. "Then it's like 'are we going to take on the idea of doing layering, where you have two different customization tops -- one on top of the other -- and it'll clip one and remove the geometry from the t-shirt underneath the puffer jacket so you can wear it?' That was a thing that became a feature, and then we realized there were like 190 t-shirts in the game."

After finalizing OlliOlli World's resplendent wardrobe, Roll7 had to decide how to let players rifle through it. To do that, they decided to stand on the shoulders of giants and take inspiration from a title they deem one of the best in the business when it comes to UI.

"The final UI actually came in really late. It was delayed, but we needed to close the full feature set of skateboards, animations, clothes, tattoos, and body shapes. We needed to lock all of those in before we could design on paper, because until you've analyzed the reality and started making a character using all of those elements, you won't understand the process," explains Ribbins.

"For a long time there were these horrible enormous lists, and some of them had bars you'd drag and others would have 50 little notches, each of which would be a t-shirt. The final iteration took shape after we decided to look at what other people have done successfully. There's obviously a strong influence of Animal Crossing in there, because that system works brilliantly, and we thought why reinvent the wheel if someone else has done a great job?" 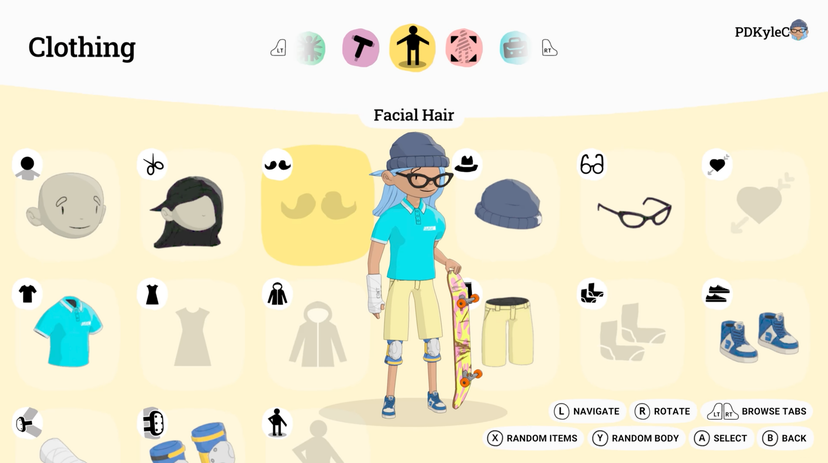 Although some of those clothes will be locked behind in-game challenges, Ribbins stresses that there'll be plenty of customization options available from the start. After all, it's all about letting players find themselves as soon as they step foot OlliOlli World. "You can be whoever you want to be," remember?

"We make a distinction in the game between hair, skin tone, body type, [and purely cosmetic items]," says Ribbins, explaining the former will all be immediately available along with a hearty range of clothes spanning shorts, jeans, dresses, and more. "Hopefully there won't be anybody feeling like they have to play a huge amount of the game before they can dress in a way that makes them feel represented."