"We had to get creative with level design when our boundaries were always the same size and orientation of a rectangle."
Joel Couture
Contributor
September 28, 2021

Pageturner takes players on a storybook journey to help Aviena and Borbu reach a place called Harmonia. To do this, they'll choose narrative branches that change the way the game plays, offering modifiers that not only shift the story, but how you play through it and interact with it. And whether you succeed or fail, the pair's story continues to move on. Quite literally, as the story slowly shrinks the play space as it's written out.

Game Developer sat down with the team at No Loading Required, developers of Pageturner, to speak with them about the storybook framing of the game and how it affected its mechanics, what appealed to them about tying roguelike challenge with interactive narrative, and why they wanted to move away from fail states and have the story move on no matter what happened to the player.

Game Developer: What interested you in tying interactive narrative to roguelike play? Why combine these elements?

No Loading Required: With Pageturner, we wanted to create a narrative game that had quick gameplay, replayability, and mechanical variation. Both of us really enjoy roguelikes for their fast-paced gameplay, so this felt like a natural combination. The "roguelike twist" that we injected into our game were the modifiers and the minigames.

We created these "dungeon rooms" on the right side of the page that the player had to face before they could move on. Through player outcomes, the story branches, taking them to new "rooms” and different challenges -- a bit like going through doors in a roguelike dungeon.

Our initial idea started with the player selecting words to finish stories, and from this we wanted there to be a mechanical impact. This is another roguelike element -- allowing players to choose buffs which remain with them for the game and provide them a variety of ways to play. Even though Pageturner is a small Game Jam project with only three minigames, there are actually 18 variations of the game based on your modifier selections and the minigame outcomes.

Through this combination, we hoped to create a game which conserves the impact of an interactive narrative but has the fast-paced and player-driven gameplay we enjoy from roguelikes. 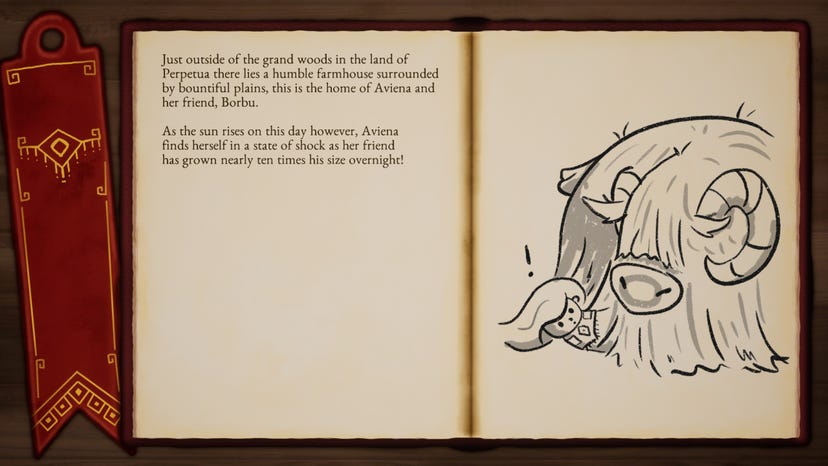 What thoughts went into creating a story that captured the feel of a children's tale, but one that would provide opportunities for gameplay challenges and branching narratives?

We didn't want a dark or gritty narrative; we wanted it to be quite playful, so a young protagonist and a storybook writing style was a good choice for achieving that tone.

In terms of providing gameplay opportunities, an epic quest or journey was a natural fit as there could be many challenges to face as the characters' travels progressed. When creating the story, it actually all started from the gameplay. We thought about what the mechanics could be and what modifiers the players could have. Once we had our three game concepts and respective modifiers, we added the flavour: fruit picking, river crossing, and forest maze. This was handed over to our friend, James, who then wrote the narrative that tied it all together.

The way players guide the story affects how the minigames play out in Pageturner. Can you walk us through the creation of one of these interactive story/gameplay challenges?

It's important with every project to know your scope and set rules. Because of the game jam, we wanted simple mechanics we could add polish to, and we wanted Pageturner to have a one-button mechanic (all the player has to do is move and press a single button in any game). In addition, our reoccurring mechanic, the shrinking play space, would have to work with each minigame.

The best example would be the fruit picking; we came up with the idea of a gathering game (pick up X collectables). From this, we thought about the player modifiers - being faster, a chance to pick up two collectables instead of one, and spawning more collectables. As we were under a time constraint, it was especially important to create impactful, but simple, modifiers. From here, we gave the modifiers their adjectives and the game a narrative flavour: picking fruit.

Every minigame after that followed the same rules and workflow. Minigame mechanic > Modifiers > Narrative.

What drew you to present everything as a book? How did this book-like presentation affect the design of the game? The written fiction?

A few things drew us to presenting Pageturner in a book, one of which being that we only had one artist: a UI artist who exclusively works in 2D.

Our inspiration for Pageturner came from choose-your-own-adventure books and pop-up books, so naturally a book aesthetic was a good starting point. Plus, Cari (Watterton) really likes diegetic UI and drawing books. We really liked the idea of the story coming to life, so having the visuals look like illustrations and only animating after the minigame began helped us achieve that "magical" effect we were after of the player breathing life into the pages.

The book did limit us in terms of play space. The main challenge was trying to fit the minigames into the page. This was especially difficult for the maze, and we ended up shrinking the characters and zooming the camera in further to accommodate the gameplay. We had to get creative with level design when our boundaries were always the same size and orientation of a rectangle! 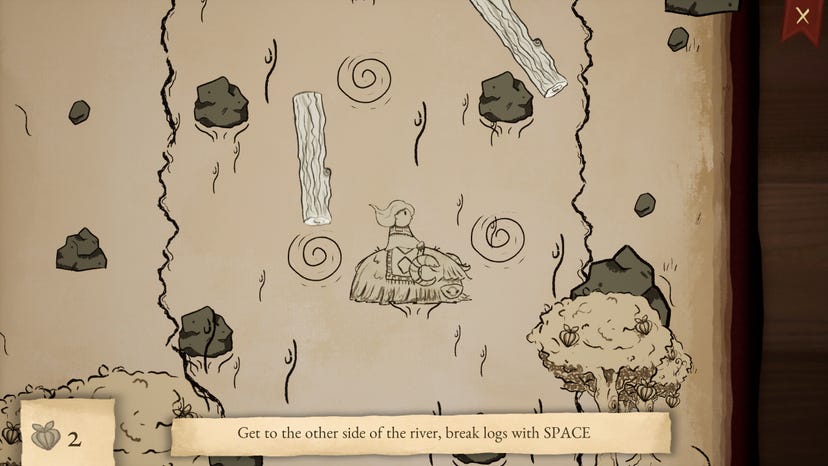 How did having the text constantly shrinking the play space affect the design of the game?

This was pretty much our main mechanic to meet the theme of the game jam "Running Out of Space." It was something we had to keep in mind when designing each minigame. It was a challenge, mainly because our book layout meant the space would always be shrinking in the same way. It also limited us in terms of level design and mechanics. An issue we had was the text pushed the player and Borbu down with it, which meant that the games always had to start at the top of the page and finish at the bottom, but we tried our best to introduce variation with each minigame.

The story continues whether you succeed or fail. What thoughts go into designing a game that continues no matter what you do?

There were a few key things to consider. Firstly, each minigame had to tie into the next one. With the fruit picking, if you gather enough fruit you can try to lead Borbu through the forest. If not, you must try a more dangerous route.

The other consideration was the modifiers. If you succeed at the fruit picking, you play as Aviena in the forest maze. You retain your modifiers from the previous game, making your job a little easier. If you fail, you play as Borbu in the river crossing and who does not yet have any modifiers.

For this Game Jam demo, we have one branch. We know that with each game leading to a different path, this is a slippery slope that can easily become unmanageable. If we were to take Pageturner further, one option we've considered is narrative "checkpoints” like the end of a chapter. For example, Chapter One could start with Aviena and Borbu leaving their home and finish with them reaching Harmonia. This would mean paths through the chapters could vary wildly but would always end at the same point where the next chapter could then begin. 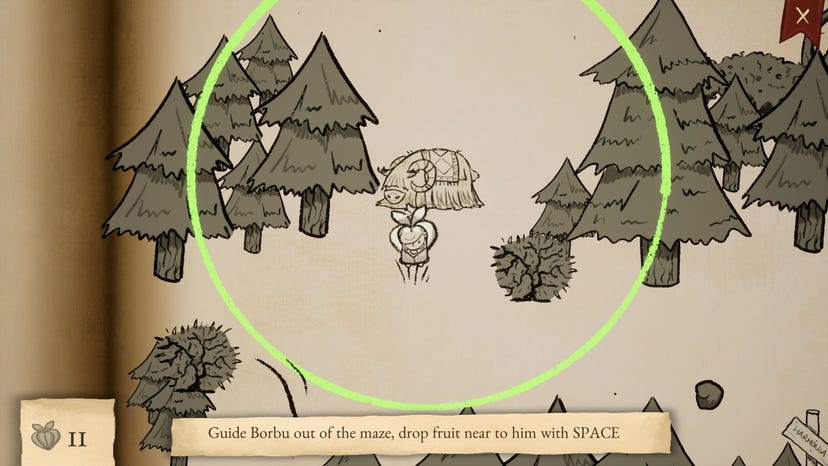 What interested you in moving away from fail states and having the story continue regardless of outcomes?

We didn't want to punish the player (too much) for being bad at a minigame. Cari is infamously bad at video games, despite spending most of her free time playing them, and I find the permadeath of most roguelikes to be really frustrating. From an accessibility standpoint, we really appreciate when a game is forgiving for the player.

Pageturner was already based around a children's story, and we wanted the show to go on regardless of whether you'd succeeded or failed. Every good story needs conflict, so even in failure, a new path is presented. In choose-your-own-adventure books, failure often meant sudden death which could leave a bad taste in your mouth. We still had to make it clear to the player that they had failed a minigame, but as we wanted a non-linear path, this only provided opportunity for new challenges and a different journey for the player. It also means if you played again and got better, you'd experience a new version of Aviena and Borbu's adventure.

Aviena and Borbu are absurdly cute characters. Can you tell us what thoughts went into their design?

We knew from the start we wanted a young female protagonist, and everyone loves a cute companion. Just look at BD-1!

One of the key parts of Aviena's character design was her hair, which was inspired by ghostly hand-drawn animations and seaweed. We wanted it to be always flowing, and as someone with long hair, Cari can confirm that when it's windy out it becomes very unruly.

Aviena actually started as a shepherd character. We were inspired by the old "chicken, sheep, and wolf" puzzle, and she initially was going to have a flock of three creatures which she'd have to shepherd through Pageturner. Also, a bit morbidly, we were considering her losing some of the flock if she failed a minigame.

As we began to prototype, we found AI very challenging, and once we got one working, we decided maybe one was enough. This limitation turned into an accidental success as Borbu was born. His name originated from the Bouba and Kiki effect, where Bouba is used to describe rounded objects. His design was based on a highland cow, a yak, and a Yorkshire terrier.

Cari wanted to add some unique flare to their designs and settled on Himalayan influences with the patterns on Aviena's shawl and Borbu's blanket.

In addition to this, and lifting the curtain a bit, the designs purposefully avoided unnecessary limbs. Aviena's shawl hides her arms and legs, and Borbu's coat is so long you can't see his feet – and this was just to make animating the characters a lot easier given our deadline.