Seemingly looking to fill the void left by the coronavirus-related cancellations of annual conferences like E3, Summer Game Fest is being pitched a "multi-month global festival" built around "breaking news, in-game events, and free playable content."

The new event will run from May to August 2020, and will feature updates from a huge array of companies including 2K, Activision, CD Projekt Red, Bethesda, EA, Microsoft, Sony Interactive Entertainment, and Square Enix.

Specific event details will be shared by each company over the coming weeks, although it's been confirmed that all Summer Game Fest programming will be available to watch on major streaming channels like Facebook, Mixer, Twitch, YouTube, and more.

Keighley will drop in and out of the showcase to host special pre and post shows for "flagship publisher events," while production company iam8bit -- which stepped down as the creative director of E3 2020 before its cancellation -- will produce a showcase highlighting upcoming games.

"In these uncertain and challenging times, it’s more important than ever that video games serve as a common and virtual connection point between us all," commented Keighley. "SGF is an organizing principle that promises fans a whole season of video game news and other surprises from the comfort of home."

You can sign up for updates over on the official Summer Game Fest website, and check out the full 'phase one' lineup below. 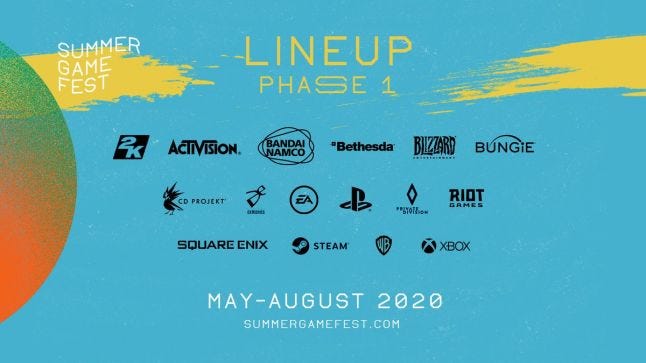